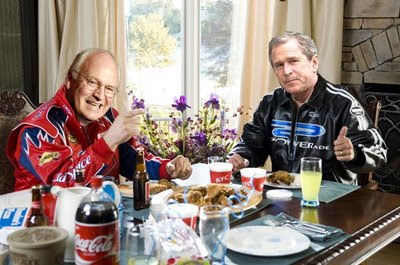 McClellan has harsh words for many of his past colleagues.

He accuses former White House adviser Karl Rove of misleading him about his role in the CIA case.

He describes Secretary of State Condoleezza Rice as being deft at deflecting blame, and he calls Vice President Cheney "the magic man" who steered policy behind the scenes while leaving no fingerprints. – The Washington Post (5.28.08)

Scott McClellan, who was Bush's press secretary from 2003-2006, delivers a scathing critique of the administration in a 341-page book titled "What Happened: Inside the Bush White House and Washington's Culture of Deception."

He describes Secretary of State Condoleezza Rice as deft at deflecting blame and calls Vice President Dick Cheney "the magic man" who steered policy behind the scenes while leaving no fingerprints, The Washington Post reported.

McClellan, 40, who defended White House policy from his podium during press briefings, also writes that the Iraq war "was not necessary" and "was a serious strategic blunder," according to Politico.com.

"I still like and admire President Bush," McClellan writes in the book to be published next week.
"But he and his advisers confused the propaganda campaign with the high level of candor and honesty so fundamentally needed to build and then sustain public support during a time of war...

"In this regard, he was terribly ill-served by his top advisers, especially those involved directly in national security."

The former aide also blasts the White House staff over the disastrous handling of Hurricane Katrina in 2005, saying they "spent most of the first week in a state of denial."

"The perception of this catastrophe was made worse by previous decisions President Bush had made, including, first and foremost, the failure to be open and forthright on Iraq and rushing to war with inadequate planning and preparation for its aftermath."

McClellan's book is critical of Rice, who was Bush's national security adviser between 2001 and 2005 before becoming the chief US diplomat.

"No matter what went wrong, she was somehow able to keep her hands clean," he writes, according to the New York Times. "She knew how to adapt to potential trouble, dismiss brooding problems, and come out looking like a star.

He also accuses former senior Bush advisor Karl Rove and Lewis "Scooter" Libby, Cheney's chief of staff, of deceiving him on their role in an explosive CIA leak scandal.

"Rove, Libby, and possibly Vice President Cheney allowed me, even encouraged me, to repeat a lie" that Rove and Libby were not involved in the leak of the name of former CIA operative Valerie Plame, McClellan writes.

Libby was convicted of obstruction of justice in 2007 and sentenced to two and a half years in prison, but Bush commuted his sentence.
McClellan's book has raised eyebrows among Washington's pundits for its candor and critical tone.

Rove, now a commentator on Fox News, hit back at McClellan as a "little irresponsible" and "out of the loop" for suggesting that he was involved in the CIA leak affair.
Rove said that McClellan "should have spoken up" earlier if he had had moral qualms about actions or policies of the White House.

The former spokesman points to his own shortcomings in his book, writing: "I fell far short of living up to the kind of public servant I wanted to be."

"As press secretary, I spent countless hours defending the administration from the podium in the White House briefing room. Although the things I said then were sincere, I have since come to realize that some of them were badly misguided."

You think McClellan is making this all up?

Not sure. But I'm willing to at least listen, although very skeptically. Thus the need for substantiation.

This will be one of many books to expose the incompetence/deceit of the Bush administration.

don't tell the conservatives that. they don't believe that the Bush administration is one of the most corrupt in the history of the US.

Even with mounds of evidence before their eyes, they refuse to see how awful a president Bush has been and how we are diminished in the eyes of the rest of the world.

But look! Over there! ZOMG! Obama said 57 states!