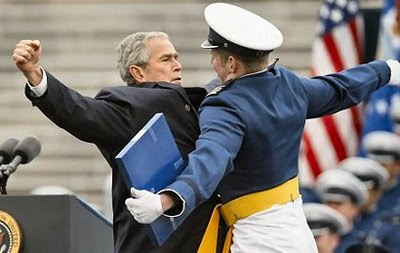 As of today, there are 234 more days left for our country to be humiliated by George W. Bush.

When he's not giving a head of state (Angela Merkel of Germany) a back noogie, he's joking about not being able to find the WMDs at a press corps dinner, or saying "Now watch this drive," after decrying terrorist bombings in Israel, or saying "Bring 'em on!" and thereby taunting our enemies to kill our troops, or the very worst, his stupid grandstanding stunt, (dreamed up, I'm sure, by Karl Rove,) that landed him on an aircraft carrier just few miles off the coast of San Diego, where he idiotically proclaimed that "...major combat operations in Iraq have ended"--five bloody years ago.

And now this. A chest bump to a cadet as he hands out diplomas to the graduates.

Can anyone imagine Dwight D. Eisenhower? Richard M. Nixon? Ronald W. Reagan? acting like a fratboy on such a dignified and solemn occasion?

But wait! He's got 234 more days to embarrass us. There's still time for more juvenile action.

Darwin help us all!
Posted by Shaw Kenawe at 3:01 PM

you're right, the President should have no fun what so ever. work work work

No one said he shouldn't have fun.

Most grown-ups know that you have fun in your backyard, the golf course, the beach, the playground, the gym.

This guy has no concept of when or where it is appropriate for him to act like a junior high school cut-up.

He has no dignity.

wasn't is Crowded House who sang "Don't Dream It's Over?" Or was that a lyric?

Bush sure is good at making an ass of himself. He actually is competent at something.