I have always loved France and its people. So many wonderful visits to this exquisite country, and now to hear about this is devastating.

We stand with France and the citizens of Paris, our thoughts are with the French people. 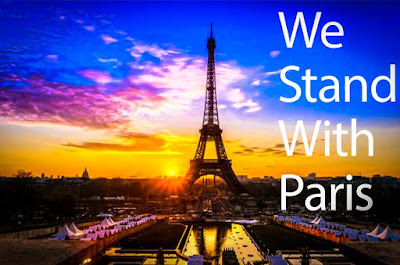 The Paris attacks are all over cable news and Twitter right now. The carnage left by the attackers is horrifying. Everyone in Paris must be feeling grief and horror right now.

What's the difference betweenness the a**hole who wrote this and the a**hole executioner jihadists in Paris?

"Anyone who would willingly attend a "concert" by a band calling itself Eagles of Death Metal deserves whatever evil may come his way."

The jihadists want to kill innocents because they believe them to be infidels or something deserving to die and the one who wrote the quote believes people who attend a concert by a band she/he doesn't like deserves to die as well. IMO, they're both stark raving mad. And should be banished from civil society.

A sickening act, indeed. Of course early reports are sometimes wrong, but it's being said that some of the attackers shouter "Allâhu akbar" as they opened fire -- so this appears to be yet another case of religious extremism running amok.

Humankind is involved in a cultural war with the possibility of making the Crusades look like a garden party.

There is a possibility the west will lose the war this time.

Three out of the five French families we are close to visited our family this summer. One family lives in Paris. I haven't heard from them, but I did hear from one of their relatives, and they are safe. But that is small comfort when I think of the hundreds of people and their families affected by this carnage. I'm just sickened by all of this.

This attack was very likely carried out by al-Qâ'idah or ISIS or people like them. But remember that the Middle Eastern people murdered by those groups outnumber today's Paris victims by hundreds to one. Why is such a tidal wave of humanity fleeing Syria now? To escape the rampages of people just like those who committed these murders in Paris.

In this cultural war, ISIS, al-Qâ'idah, the Saudi and Iranian regimes, Kevin Swanson, Ted Cruz, the Mormon church, and suchlike constitute one side; sane secular people trying to live out their lives in peace in France, the US, Syria, Iran, Arabia, and elsewhere constitute the other.

Today's horror is not the work of a different culture. It's the work of parasites even deadlier to their own culture than to ours.

Understood. The culture, or society, or tribe, or whatever term one chooses to use damn well better snuff out their own vermin. Because when it threatens me, my family, and my country I indeed begin to take it personally. Sorry.

As reprehensible as those things you mention are the immediate concern should be a concerted effort by the west AND THE MIDDLE EAST GOVERNMENTS to exterminate the vermin and burn them in the hell holes they have created.

Or, we can wait, and believe the vermin has been contained. When in all likelihood the vermin have grown smarter, more shrewd, more agile, and more deadly. Both for the people of their region and the west.

Evil thrives when good shackles itself.

From DU: "French media put on a master class in how to conduct responsible, measured journalism in the face of chaos and fear. At the forefront was France 24, a network that brought continuous coverage of the ongoing terror attacks to viewers both in the country and to the rest of the world. Occasionally, they would offer perspectives from across the world, showing tweets and messages of well wishes from those across the planet hurting right along with France. Unfortunately, they also stumbled across America’s aforementioned right-wing sewage dump.

Wasting no time, conservatives spent the night competing with each other to say the most offensive, idiotic things they could about the attacks – ........

Mother Jones compiled a list of some of the worst offenders. Many of the usual suspects were there:.........

..............After seeing Gingrich’s pitiful stab at turning France’s tragedy into a way to sell more American guns, France 24’s Mark Owen was both baffled and outraged.

“So he’s using this atrocity to make his point people should be able to carry guns basically. It’s funny how people will very distastefully use this kind of situation to express their own particular political . Newt Gingrich, shame on you.”

Basically I guss these types of terror attacks, fueled by Islamic extremists, can now be considered the new normal. Perhaps the west will soon fully understand what Israel has experienced for years.

"It’s funny how people will very distastefully use this kind of situation to express their own particular political . Newt Gingrich, shame on you."

....as if the anti-gun types don't immediately politicize EVERY SINGLE MASS SHOOTING to push their own anti-gun political agenda.

RN: the immediate concern should be a concerted effort by the west AND THE MIDDLE EAST GOVERNMENTS to exterminate the vermin

So far it is mostly Middle Easterners. The Iraqis and Kurds are doing most of the fighting to crush ISIS, with help mainly from Iran. The West's help is mostly limited to air support. Unfortunately ISIS is too strong to be breezily "exterminated" in a few days.

Of course, France and Russia may well start to play a larger role in the fight now that many of their own citizens have been killed, but don't forget who's been doing most of it up to now.

Of course ISIS is too wide spread, too large, too strong to eliminate in a few days. I doubt the governments of the middle east with or without limited support from us will succeed.

Hopefully France, Russia, Britain, Spain, and the rest of the west steps up as well. Coordination of effort and will shall be required. It remains to be seen whether this will happen. We could certainly use a George Herbert Walker Bush right now. None seem to be in sight.

@Infidel753 --- It's a cultural war fought within, not between, nations and regions.

And how well can Western institutions hold up against not only the threat from terrorists but also from the Know Nothings among us largely on the right?

Since its initial surge ISIS has been pushed back on the ground and is very unlikely to achieve much militarily.
It's being reported that at least a couple of the barbarians were French citizens known to police.
Not an uncommon theme. What constitutes a sufficient threat to be cause to retain these individuals?

I think its a more important question to ask than why weren't there a bunch of cowboys in the theater armed, firing at movement and aggravating a deadly situation.

The West (largely Britain and America) smacked this hornets nest with a stick and now we try to find a way out.

The extremists fly planes into the World Trade Center, the extremists blow up planes with innocent non Muslims people, the extremists cause carnage in Paris, there are many other examples and you because it's "internal" we should do what Duck? Please tell us.

Ducky: What constitutes a sufficient threat to be cause to retain these individuals?

Conspiracy to commit violent crime is itself a criminal offense everywhere, and in many cases terrorist attacks have been stopped before they happened because of this when the authorities knew about it in time (for a US example, look up the Hutaree). In Europe, many terrorist plots have been thwarted before they happened because the police got tip-offs.

The most important factor contributing to these successes is the good relationships most European police departments have built up with the mainstream Muslim communities in Europe. Most Muslims in Europe desperately do not want to see Islamic terror attacks happen -- aside from anything else, such attacks provoke hostility among the general public against the Muslim community in general. Muslims are often in the best position to get wind of something being planned and tip off the police. If the crazies succeed in turning the fight against terrorism into a general crusade against Muslims and immigrants, the police would likely lose their best tool for learning about attacks and stopping them before they happen.

Unfortunately no system is perfect and sometimes the terrorists maintain good enough secrecy that no one finds out what's up until its too late. Evidently that was the case with yesterday's attack.

As for the wingnuts here, publicity and unmasking their extremism are effective in the long run, I think. That's where bloggers, and commentators like Bill Maher and Rachel Maddow, play a role. Barely a decade ago, for example, fundamentalist hostility to gays made homosexuality disreputable. Today, that very same fundie hatred is increasingly making the fundies disreputable. People like Kevin Swanson are seen as dangerous freaks, not moral leaders. They're being isolated and sidelined. It's a slow grind with every voice contributing just a little to progress, but the progress is real.

All true, but remember also that a far, far larger number of Muslims and other Middle Easterners have been killed by those same Muslim extremists. The vast majority of the extremists' victims have been non-extremists among their own people.

And this is relevant to "what we should do". Like fascism and communism, Islamic extremism is a problem that cannot be solved quickly or easily. It will take a protracted struggle. But it's important to remember that we have allies in that struggle in the Middle East itself, because they are far more threatened by jihadism than we are.

The most self-defeating thing we can do is treat this as a "clash of civilizations" when it's actually a clash of both Western and Middle Eastern civilization against a murderous but relatively small cult of deranged nihilistic barbarians.

Muslim leaders in Saudi Arabia, Iran and Indonesia have all condemned these acts.

It will interesting to see how many folks acknowledge this marked change from the past.

I essentially agree. It is of course a sane rational posistion.

Distrust, and the unwillingness of look beyond the obvious and at the errors ones own national policy is certainly a shortcoming of the right. Especially the neo cons and fundamentalist Christians.

It is likely a safe bet the vast majority of the rightwing steam machine won't.

Dave: It will interesting to see how many folks acknowledge this marked change from the past.

"Marked change from the past"? Just because the media and talking heads over here ignored Muslim leaders' condemnations of terrorism in the past, doesn't mean those condemnations didn't happen.

The same people will ignore it this time, too.