Trump’s Focus on Muslims Distracting Him from Campaign Against Mexicans, Supporters Fear

After the billionaire said he would consider shutting down mosques if he were President, supporters expressed concern that such signature proposals as a wall with Mexico and mass deportations were being lost in the shuffle.

Carol Foyler, who viewed a recent Trump appearance on television, said that she was “alarmed” to hear him talk about closing mosques “without mentioning the wall with Mexico even once.” “I just worry, I guess, that with all of this talk about Muslims he’s really forgetting about Mexicans,” she said. “It feels kind of like a bait-and-switch.”

Another Trump supporter, Harland Dorrinson, agreed. “Shutting down the mosques is a great idea, sure, but he shouldn’t do that if it’s going to divert resources from forcibly deporting eleven million immigrants,” he said. “I would be very sad to see that happen.”

But Tracy Klugian, a die-hard Trump volunteer who is working for his campaign in Iowa, called such criticism of her candidate “misguided.” “You don’t get to be a successful businessman like Donald Trump without being able to multitask,” she said.


Please go to Infidel753 and read his perceptive and accurate report:

After the bloodshed comes the bullshit


President Obama called out Republicans for being afraid of the media and orphans, as he took the cowardly GOP to task during a meeting with reporters in the Philippines.

"While meeting with reporters in the Philippines, President Obama said: I cannot think of a more potent recruitment tool for ISIL than some of the rhetoric coming out of here in the course of this debate. ISIL seeks to exploit the idea that there’s war between Islam and the West, and when you start seeing individuals in positions of responsibility suggesting Christians are more worthy of protection than Muslims are in a war-torn land that feeds the ISIL narrative.

It’s counter productive. And it needs to stop. And I would add these are the same folks who suggested they’re so tough that just talk to Putin or staring down ISIL (will work) .. but they’re scared of widows and orphans coming into the United States of America as part of our tradition of compassion.

First they were worried the press was too tough on them in the debates; now they’re worried about 3-year old orphans. That doesn’t sound very tough to me." 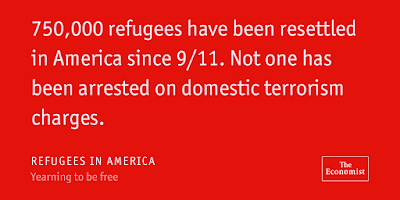 The US Has Begun Bombing ISIS Oil Refineries

Obama blasts Republican suggestions that U.S. should only allow in Christian Syrian refugees: ‘We don’t have religious tests for our compassion’ 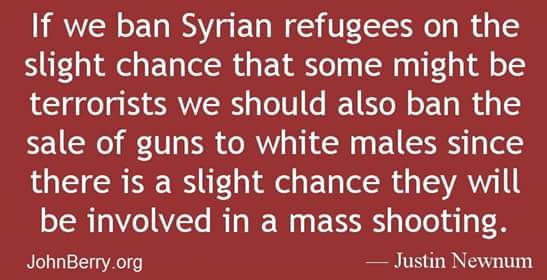 "As David Bier, Director of Immigration Policy at the Niskanen Center, points out, a sponsor-based-program initiated by President Reagan saw the successful settlement of at least 16,000 refugees in the US between 1987 and 1993, mainly Cubans and Soviet Jews and Pentecostal Christians.

But some in the U.S. have suggested absurd solutions like penning Syrian refugees into camps, or only accepting those who can somehow prove they are Christian, as NewsCorp’s Rupert Murdoch wants to do.

Is this really our answer? To show these refugees what freedom and democracy have to offer by imprisoning them and giving them religious tests?

This is not who we are. It’s been deeply disappointing to see many of my Republican friends turn on our American values and cow to the baser politics of fear, rather than make the case for humanity and leadership on the world stage.

This isn’t just about feel-good back-patting so we can say we did the right thing. There’s real purpose in taking in Syrian refugees, if we can summon the will and the courage, and remember what it means to be American."

The right wing Tea Party bloggers have officially lost their minds. Here's a sampling of their garbled, incoherent blather. IF they're unable to think cogent thoughts or express themselves in their own native language, why should anyone pay any attention to their mindless, inarticulate, and grossly stupid rants?

"If you don't like it here then get the hell out, maybe you'll like it mute[sic] in Cuba. And another thing, I'm NOT a f**king bank, stop asking me for f**king money. My answer will always be NO. If you can't get ya ass out here and WORK for you're own money, idk what to tell you're[sic] lazy ass."


"Once again we find the progressive socialist democrats and their bleeding-heart, agenda’s are appearing to embrace."

"obama has created some new rules in order for the moslem immigrants, asylum seekers, migrants Invaders, those male peaceful, grateful little kittens of military age, and who are probably not even from Syria, to appear to be ever so appreciative of our hospitality, like they are in all the European countries where they display their appreciation by stealing from, raping, and pillaging the locals has decided to triple down on his stupidity."


Those three rants are on the level of a 3rd grader. BTW, an analysis of Donald Trump's level of discourse showed that his speeches are written and spoken at a 3rd grade level. The above examples of rants from Tea Party/Trump supporters confirm this sad but obvious fact.

"My Message is of gratitude to all of the Ex Puppets who are working hard on the information gathering of the illegal unconstitutional methods that Violets the Constitution of the United States of America. We have a change a updated version on how to share your DETA but understand this. YOU ARE NEVER ALONE , WE ARE MANY.. We Have enough faces with holding positions of the high calling!! FROM THE OUTHOUSE TO THE WHITEHOUSE. This time to all of who have been following me for sometime and my new followers, MY MESSAGE IS TO FIGHT THE LIE, LIVE FOR THE TRUTH OR DIE........ HEART OR HEAD, FAITH OR DEATH, UNITED OR DIVIDED, STAND OR FALL, LOVE OR KILL. TRUST IN ONE WAY OR LIVE YOUR WAY.. JOHN 14:6"

Does anyone know what the hell that means?

Sounds like an unhinged incoherent rant by a poor soul about ready to take to the bridge or overpass.

Those poor unfortunate trogs eat up the lies and the anger emanating from the extremist news sites and blogs. Who wouldn't be incoherent with rage and stupidity after listening to that sort of toxic racism and elimination rhetoric day after day -- "Kill All MUSLIMS!" "HILDEBEAST IS A HAG!" "OBAMA IS A COMMIE!"? That sort of rot eventually eats away at their fact-challenged brains like a zombie on a brain-eating binge.

They're a lost cause. They are impervious to facts, rational thinking, and they actually are the embodiment of the opposite of everything this country stands for: Equal justice for all, equality of opportunity, compassion for the less fortunate and for people escaping from murderous regimes, and they're against allowing people who are nonChristian and NO FAITH to run for POTUS.

And, may I add, any resemblance to the Christianity their Savior espoused is purely accidental. As some comedian once said, if Jesus came back today and saw what they say and do in his name, he wouldn't be able to stop throwing up.


More mush from the mush-brained:


FAUX News host Elisabeth Hasselbeck suggested on Wednesday that it would be compassionate for President Barack Obama to turn away Syrian refugees if he did it “with a good hearted nature.”

“Why would the president not echo your sentiments in saying that?” Hasselbeck wondered. “Why would the person in the highest position in charge of keeping our nation the most safe at the very least accept a pause in this time, with the good-hearted nature that of course as a nation we want to accept refugees because they’re not all bad.”

Are they all drinking the same stuff that makes them talk like 3rd graders?

"I have heard no Democratic pols advocate anything but tight screening, suggest that we're accepting an immodest number of refugees, or act like this is an illegitimate thing to be concerned about. Still, the abysmal reality of Republican politics is that it makes no difference what Democratic tweeters or Democratic pols say.

As in the "Ebola Crisis" that never was, Republican pols will frame the Democratic position on Syrian refugees as an apocalyptic betrayal of all that is American. On Democrats' part, neither political temperance nor rhetorical prudence can preempt the GOP's clanging hysteria and cries of treason. One may mock Republicans or not, but not mocking them will in no way lessen their frenzy or the receptive frenzy of "ordinary centrists" who, in further reality, are the ones too bloody "detached from reality" to know swashbuckling demagoguery from authentic concern."

Hasselbeck is understood by the people who watch FAUX NOOZ and no one else. Argle Bargle is their preferred language when they're not doing their howler monkey rage hysterics.

Fifty-three percent of U.S. adults in the survey, conducted in the days immediately following the attacks, say the nation should not continue a program to resettle up to 10,000 Syrian refugees. Just 28 percent would keep the program with the screening process as it now exists, while 11 percent said they would favor a limited program to accept only Syrian Christians while excluding Muslims, a proposal Obama has dismissed as “shameful” and un-American.

The 24/7 Fox "News" effect as well as the GOP's constant fear droning perhaps?

CNN's report on global terrorism is a good read.

In my view the president has laid out a reasonable approach that is by far more sensible than anything the GOP neo con fundamentalist mentality has produced as alteratives.

RN USA, see my post tomorrow on how Americans reacted to allowing refugee Jews from Europe into the country.

Shaw, and now politicians from both parties are asking for camps like Manzanar again...

And only "proven" Christians... And commissions to examine people. And saying you can never know what is on the heart of even a 3 year old...

Disgusting... After Ronald Reagan officially apologized (ironic I know) and said it would never happen again, here we are...

It seems so Shaw. It has been said the more things change the more they stay the same.

I never thought I'd see the day when the French show they have more Balls than the fake macho Republican Party!

Thanks for the link!

Once again the Republican candidates act like a passel of petulant brats while Obama shows himself to be the grown-up. More thankful than ever that he's in charge instead of any of them.

As for The Donald, I see he's recovering his front-runner status as the Carson boomlet subsides. And the Iowa and New Hampshire votes aren't so far away any more. I'm starting to think this guy really could do it -- he really could be the Republican nominee. Hillary's opposition-research people must be salivating at the thought of such a "target-rich environment". Almost every time he speaks for 30 seconds, he generates another Hillary campaign ad.

Hank, great news about France! They probably have a better grasp of the situation than our Republicans do. One of the coffee-shops hit by the terrorists was owned and staffed by Algerian immigrants.