Angry, belligent, loud-mouth, B.S.er, Donald Trump (now polling second to Kindly Dr. Ben Carson) has published a book featuring a photo of himself scowling and enraged, because everyone knows that an irate, sulking, pouty, bloviating bag of wind is just what America wants in a preznit.  Who advised Donald on this stupidity? His worst enemy?

Go for the "Mad As Hell and I'm Gonna Punch You in the Face" crowd, Donnie.  That'll work as your polling numbers begin to tank.

PS, Donnie, love the title, that's a stroke of genius.  Whoever advised you on this is our best friend!

Go for it, Grumpy Cat! You rock! 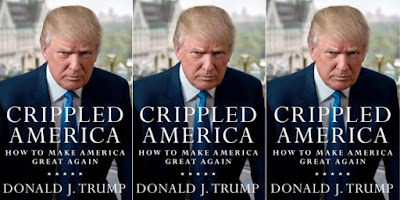 His expression is not so much grumpy as ... constipated. Eat some fiber, Trump!

Going to be interesting to see how the Donald reacts to being an also ran.

So sure of himself that when he is rejected by even the reactionary rightwing of the GOP, he just may implode.

He set this all in motion himself. Now he is going to have to lie in his own mess.

Anyone think he will take any responsibility for his inevitable fall, or will it all be attributable to others?

Now that I look at the photo after reading your comment, it is plain to see that he's suffering from some sort of blockage. We do know he's full of it.

Who was his ghost writer, Newt Gingrich?

Best educated guess Dave, no, he will not take any responsibility and my option is the uninfored reactionary right will join him in blaming others.

Best show this campaign season is the implosion of the Trump candidacy. Remember all those wingnuts saying he's gonna go all the way and how those wingnuts believed he'd be the next person to live in the White House.


They live in a bubble of nitrous oxide.

The Donald is going down. Everyone with any brains knew this. Let's watch him fade like a bad sunburn. What a joke he's been. And it was predictable to see the loony righties fall all over themselves sucking up to the him. They were attracted to the assh*le. Who's surprised?

So... As far as anything important. Watched the netflix instant streaming, "Life of Riley" about B.B. King. Incredible documentary. Everything from his life as a child farm laborer to his early career in Memphis. I even saw a photo still of a Farfisa Compact combo organ, circa 1962-1964 in Memphis. Really great stuff. Best blues rockumentary I have ever seen. So, after this entire chapter devoted to English cats who helped to revive the blues with their honest enthusiasm, it all culminates in a very recent clip of Mick Jagger, (At the White House? Who knows where the venue was?) singing the praises of B.B. and other great bluesmen, clearly out-of-breath after a strong performance, at seventy years of age! And the camera pans to B.B. who gives Mick a dignified bow. Then it pans to a president Obama with a huge, ear-to-ear grin.

Thanks for the recommendation on the B.B.King documentary. Will watch it tonight on Netflix.

There's not a lot more to learn about him, is there. As John Oliver astutely described Trump:

"He's an open book, and that book hasn't got many interesting words in it."

Ahab: Interesting thought, but Trump's incessant Twitter rampages are more evocative of diarrhea than constipation, and most likely the book is the same. Either way, the picture doesn't make him look like a man you'd like to be near either end of.

Who advised him on his cover picture? Maybe the same people who advise him about his hairstyle?

"Donald Trump just delivered, I must confess, a fascinating 45-minute sales pitch for his new book and campaign manifesto, Crippled America, which "look[s] at the state of the world right now," which is "a terrible mess," for "there has never been a more dangerous time." How did Trump so effectively sell this doom? As a soon-to-be thing of the past. In huckstering his dystopian book, Trump brimmed with good cheer: Worry not, the sheer force of his high-energy personality will cause our global competitors to negotiate nothing but pro-American trade treaties, and American jobs will blossom as beautifully as a Monet poppy field.

His was a demagogic tour de force, many of which I have watched from Trump, but none quite like this. He just keeps getting better. As with any devilish imp, he brilliantly mixed truth with lies. His entire spiel about Obama's America being "crippled" in almost endlessly unprecedented ways was the umbrella untruth for the lowest-information crowd, huddled in shaded terror. Yet seamed throughout Trump's oddly positive diatribe were devastating knocks not on Obama, but Trump's internal competition. Ben Carson? A heartless nitwit who wishes to rid you, or your grandmother, of Medicare. Marco Rubio? An "overrated" kid who isn't responsible enough to handle a credit card. And Bush, poor Jeb Bush — no, said Trump, he wouldn't repeat for the folks at home his impersonation of Jeb; that of a man asleep at a podium."

He mixes in an image of a swastika with images of JEB dressed as a Mexican. Totally infantile and amazingly stupid. Trump blamed someone on his staff for the Tweet -- naturally. But as I've said Stupid is attracted to Stupid, so if a staffer did this, it reflects Trump's disgusting character.

Radical P.L., Trump lost his lead to a kindly but confused weirdo who was good at operating on brains, but seems to have lost his a long time ago.

TOM, yes. The Stupid Party lives -- in their own bubble.

From the reviews I've read about the book, it's mostly rehashed old campaign stump speeches and falsehoods mixed in with Trump's usual overblown admiration of himself. IOW, the Trumpistas will think it's a great work of literature, and everyone else will ignore it.

The "Mexican Jeb" image is really more telling than the swastika. Trump clearly has a dangerous disdain for Latinos. It's more than just a pose. 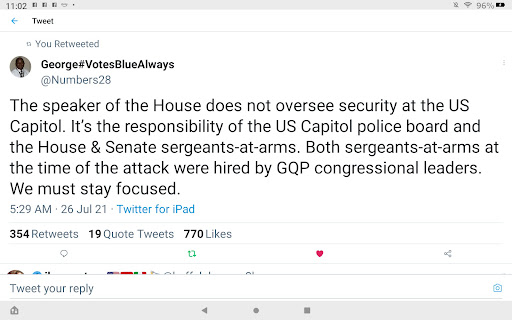 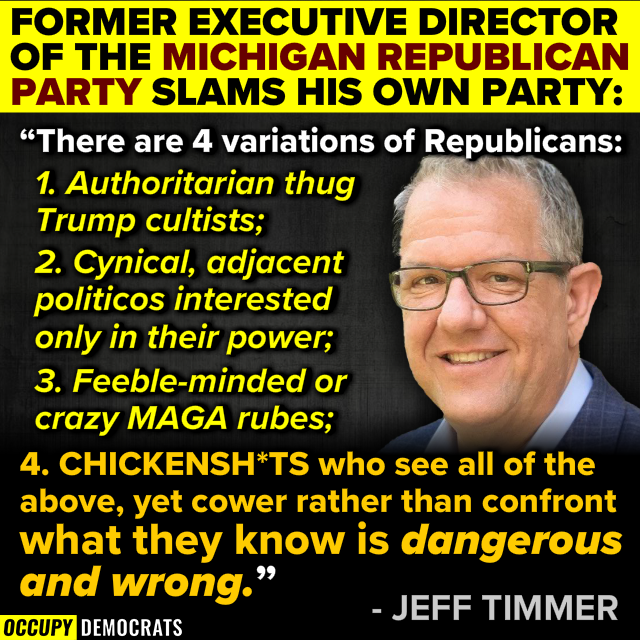