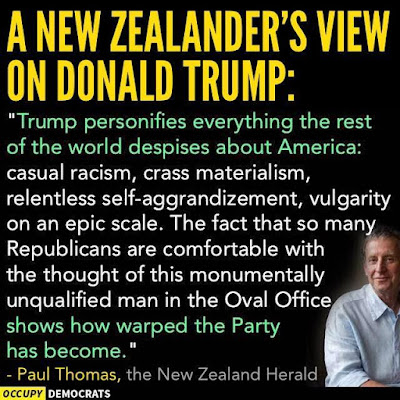 Donald Trump’s dangerous, racist lies of the past few days :

The United States is about to take in 250,000 Syrian refugees;

African-Americans are responsible for most white homicides;

and during the 9/11 attacks, “thousands and thousands” of people in an unnamed “Arab” community in New Jersey “were cheering as that building was coming down.”

Donald Trump has had an interesting week. Just when we thought the guy couldn’t be any more of an outrageously bigoted imbecile, he goes and decides that it would “absolutely” be a good idea to have a Nazi-esque database and identification program of all Muslims living in America. And of course, for his grand, racist finale,

The Donald tweeted out an incredibly racist, and patently false, graphic that claims that most white homicide victims are killed by black people. It turns out, though, that this particular scandal isn’t over. It appears that the graphic that Trump tweeted out is not only really, really racist, and completely false — it is also neo-Nazi propaganda.

Charles Johnson, who runs the blog Little Green Footballs, went on an extensive search for the origins of the image as well as the statistics it claims come from the San Francisco Crime Statistics Bureau. It turn out that no such government outfit actually exists; however, the FBI’s correct statistics reveal that 82 percent of white people who are murdered fall victim to those of their own race; the same is true of 91 percent of black murder victims. This is simply because people tend to commit crimes close to home.

As for the racist and incorrect statistics? Well, that graphic came from a twitter account belonging to the neo-Nazi group the German Faith Movement. Their official account photo is that of a modified swastika, and the description shows that they are big fans of Adolf Hitler:


Congratulations, Donald Trump: you’ve brought Jews and Muslims together – against you.


Having lost momentum in the republican primary and having realized that his attacks against Mexicans could only get him so far with conservatives, Donald Trump thought he’d finally found the edge he needed this week to get his poll numbers climbing again: attack Muslims in such an over the top manner that republican primary voters would once again become excited at the idea of him as President. But instead the move has backfired to the point that he’s unwittingly brought Jews and Muslims together – against him.

Never forget who the people are that support this neo-fascist. They're the same folks who've smeared President Obama for the past 7 years and who cried less than 3 months into Mr. Obama's presidency "WE WANT OUR COUNTRY BACK!!!!!"

Never forget this is the dangerous bigot and demagogue they want to put in charge of America:


"What beltway pundits have not seemed to grasp yet, is that Trump’s racist slip ups and his verbal tirades are not a bug, but rather a feature of his campaign. Donald Trump is running as a white nationalist, and his campaign appeals to racists, bigots, xenophobes and insecure white voters who are growing uneasy with an increasingly multicultural America.

Since Trump is a major party candidate, the media has been overly cautious in avoiding labeling Trump a racist, but his campaign has not been cautious about demonstrating that Trump is in fact, a racist. Trump’s blatant racism was on full display on Sunday when he tweeted bogus crime statistics from a neo-Nazi twitter user, falsely claiming that 81 percent of white murder victims are killed by black perpetrators. The real percentage is 15 percent. The vast majority of white murder victims (82 percent) are killed by other white people."

The Republican establishment is now so alarmed about this that they're launching an all-out barrage of attack ads to try to take Trump down. Watch for his support among the paint-chip-eating Republican base to climb to 40%. The party has rallied those people for years with coded messages of bigotry -- Trump is just ditching the code and bringing it out in the open, hence the mob's enthusiasm. All the ads will do is reinforce that.


And don't forget that the people who love Trump are the same ones who constantly remind everyone on their blog of what liars Hillary and Barack are, but say nothing about Trump, except they think he'd be great as a president because he's strong! He's strong alright, one of this country's strongest liars. But the Baggers are willfully blind to a Republican who have no relationship to the truth, because he's THEIR liar, so that makes it ok.

This ought to get the Baggers excited and make them love The Donald even more:

Add those Syrian refugees to the 11 million Latinos he'll deport, and this country can then be called the United States of Deportations of Everyone We're Skeered Of!

"But the problem is not Trump. The problem is the GOP base -- those millions of American bigots and imbeciles which the Right has spent many years and billions of dollars to flatter and pander and shape into an electoral battering ram which is now so reliably paranoid, angry, Dunning-Kruger ignorant and programmable that they can be told what to think, what to buy and who to vote for by Rush Limbaugh, Roger Ailes or Donald Trump.

The problem is the GOP base -- America's very own, home-grown army of rage-drunk, half-mad chumps who are so fucked-in-the-head they can be profitably harvested by the same liars telling the same lies over and over again endlessly. Which is why the problem of American Conservatism's bold and metastasizing fascism -- which has been decades in the making -- will not begin to be solved tomorrow."

The base of the Bagger Party loves fascists. They need a Daddy authoritarian figure to make them feel powerful. Donald is their perfect candidate. They love foul-mouthed a**holes. It's a reflection on themselves.

Trump is THE TRUTH!

Obviously a far right wingnut who wouldn't know "THE TRUTH" if it sat on his/her face.

"We've been around the political block long enough to know that almost all presidential candidates exaggerate, dissemble, take statements out of context and, yes, lie. But from the start of Donald Trump's presidential campaign (remember Mexican rapists?), he has taken this to a level we haven't seen before in American politics.

Consider just these two examples from the weekend. First, Trump said on Saturday in Alabama: "I watched when the World Trade Center came tumbling down. And I watched in Jersey City New Jersey, where thousands and thousands of people were cheering." In fact, as the New York Times writes, "No news reports exist of people cheering in the streets, and both police officials and the mayor of Jersey City have said that it did not happen. An Internet rumor about people cheering in the streets, which said it was in Paterson, not Jersey City, has been denied numerous times by city and police officials." But when ABC pressed Trump on his statement, he stood his ground. "It did happen. I saw it...

It was on television. I saw it." Second, Trump retweeted a graphic claiming -- falsely -- that African Americans are responsible for the killing of most blacks and whites in America. "That is not true, the Washington Post notes. "According to data from the FBI, most whites are killed by whites, as most blacks are killed by blacks. There's an obvious reason for that: Most people are killed by someone they know."


Every Patriotic American should be wearing on of these.

RN: They may become a hot item. I've already seen a few Republicans on the net swearing they'll vote for Hillary if Trump is the Republican nominee.

Maybe the Republican party needs to go through this -- nominate Trump and then crash and burn in an epic defeat, to finally break out of the fever of madness that has overwhelmed it since 2009. Trump is bringing the festering abscess to the surface so it can be clearly seen -- and lanced and drained at last.