The GOP: Repeating Shameful Actions in Our History

Today's T-GOPers are no different from the people who refused to allow Jews escaping from Nazis to find refuge here in America. This should be a humanitarian issue, not a political one,  Every single state but one refusing Syrian refugees -- even orphans -- is led by a GOP governor.

The T-GOP:  Repeating the worst in our shameful history: 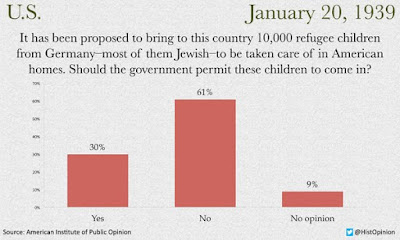 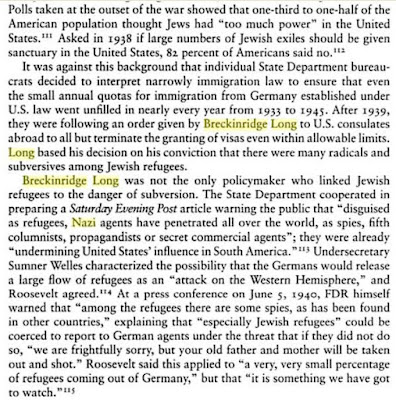 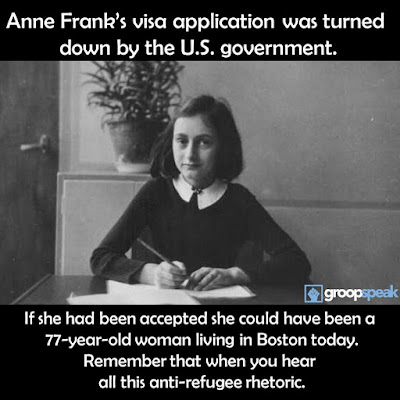 Of the 859,629 refugees admitted from 2001 onwards, only three have been convicted of planning terrorist attacks on targets outside of the United States and none was successfully carried out. That is one terrorism-planning conviction for a refugee for every 286,543 of them who have been admitted. To put that in perspective, about 1 in every 22,541 Americans committed murder in 2014. The terrorist threat from Syrian refugees in the United States is hyperbolically over-exaggerated and we have very little to fear from them because the refugee vetting system is so thorough.


Donald Trump, who is leading in the polls for the T-GOP presidential nomination, wants to fundamentally transform America by ignoring the U.S. Constitution:


"Donald Trump, still the co-frontrunner for the GOP presidential nomination, has doubled down his initial suggestion that, in the wake of last Friday’s attacks in Paris, we must “strongly consider” shutting down some mosques.

Last night, Trump followed up on his initial statement by declaring that mosque closing was not just a possibility but an imperative. "Nobody wants to say this and nobody wants to shut down religious institutions or anything, but you know, you understand it. A lot of people understand it. We’re going to have no choice," he said on Fox News (via Politico).

As is so often the case when it comes to Trump’s ideas about governance, it’s not exactly clear whether he is merely ignorant of the law or actively choosing to disregard it. Either seems like a possibility in this case."


And from the hysterical right wingers who went koo-koo bananas over a misquote from President Obama about "fundamentally transforming" America?


This is how it works for a lot of the extremists on the right:  When THEY want to fundamentally transform America and ignore the U.S. Constitution, that makes THEM patriots. And they want Donald Trump, who would truly "shred the Constitution" by closing down places of worship, to lead them in this real fundamental transformation.

To people who look up to authoritarian "Daddy" figures, this excites them and makes them feel powerful, even if it goes against everything America stands for.  If they don't speak out against Trump's unAmerican idea, that has to mean they approve it.

Trump and the GOP certainly have it goin on.

For some strange reason it seems their thing is, keep it simple stupid. And they are succeeding.

For people who claim to know and understand the U.S. Constitution their knowledge of it is woefully lacking. Yet they consider themselves "true" Americans and patriots.

Unbelievable! The people of the Satanic Temple of Minneapolis are better Christians than the "extremeist Christians" calling for the death of all Muslims and calling all Muslims vermin!

Who would ever think Satanists would be better at being Christians than Christians?

If there is anyone in the Minneapolis area who is Muslim and afraid to leave their home out of fear for some kind of backlash, don’t hesitate to reach out to us. We would be glad to escort you where you need to go without advertising our presence – just big dudes walking you where you need to be. We would also happily accompany you so you can get some groceries.

Christ the man is no longer represented by his church in America.


The so-called Christians on the hard right act more like Satanists and the Satanists act more like Christians, offering a helping hand to people in need. Shows you how upside down the Tea Party people are. Their hero is Donald Trump who wants to crap on the constitution and his supporters cheer the jackass on?

Donald Trump used Breitbart as a legit source of news? More evidence of his cement-headed idiocy:


The GOP front-runner is referring to a Breitbart story posted on Wednesday, which notes that two separate “family units” of Syrians were “apprehended” at a border crossing in Laredo, Texas, earlier this week.

The problem with using this week’s incident in Laredo as evidence of a threat, or that the border is not secure, is that according to the Department of Homeland Security, as first reported by NBC News and Bloomberg’s Josh Rogin, the families weren’t hiding from authorities.

A DHS representative told Slate by email that “on Tuesday, members of two Syrian families, two men, two women and four children, presented themselves at a port of entry in Laredo. They were taken into custody by CBP and turned over to ICE for further processing.”

They were not, in other words, trying to sneak around a border crossing undetected and no wall was necessary to stop them."

This is the guy the TeaPublicans think is ready to lead America? He picks up information from Breitbart? And hasn't the brains to check its veracity?

The blow hards are really making hay with this latest act of treason by the Muslim communist Kenyan usurper.
Carson's catatonia isn't keeping up with La Trump's bluster and Cruz is really moving up.

Meanwhile the right has us turn away from even minor relief of a refugee crisis we helped create.


@EWErickson
Dear President Obama, today France is leading from the front to contain what you couldn’t contain leading from behind.

That kind of statement demonstrates Erickson's ignorance of the fact that over the last 15 months, the U.S. has carried out 6,353 airstrikes against ISIS."

The amazingly ignorant jackals on the right describe President Obama as this:

"...lost on a sea of confusion, bobbling on a raft of ignorance and arrogance, swinging his one remaining oar at anyone who approaches him..."

Gross ignorance, since the person who wrote that is oblivious to what the U.S. has been doing. But we're not surprised because many of the TeaPublicans thrive on ignorance and hatred of this president.

Happily we know they're nuts and their beliefs are based on their galloping stupidity and misinformation which they eagerly lap up like flies on a pile of crap.

The a**holes on those news site and blogs claim Obama is destroying the country when in fact their stupidity and fascism will ruin us all especially if their idiot candidate Trump and his half-naked wife win the White House. They're too blinded by hatred to get it.

Gross ignorance, since the person who wrote that is oblivious to what the U.S. has been doing.

And not only Trump but the supposedly less-irresponsible Bush has been taking advantage of that ignorance to denounce Obama's policy as a failure and bray for a more bull-in-a-china-shop approach.

In fact Obama's policy is succeeding. Kurdish and Iraqi forces supported by US and British airstrikes have recaptured significant territory recently, including the strategic town of Sinjar last week. The territory under Dâ'ish (ISIS) control is shrinking. That's probably a big part of the reason for the Paris attacks -- they're losing and trying to re-assert themselves.

As for the Trump/Breitbart story, who cares about mere accuracy if it gives the American Duce another reason to build a wall? He'll probably demand another wall on the US-Syrian border. And only a Kenyan-born commie Muzzie-loving loooooser would point out that no such border exists.

Who was it who said in times of troubles, uncertainty, and universal ignorance, a fascist would arise and appeal to the worst in the American right wing. Donald Trump is the embodiment of American fascism.

Recent polling shows well over 50% of Americans want to pause accepting the Syrian's.
Are they all ignorant, racists, bigots, heartless, or a combination of all?

Anon: Recent polling shows well over 50% of Americans want to pause accepting the Syrian's. Are they all ignorant, racists, bigots, heartless, or a combination of all?

Yep. Mostly ignorant, in the literal sense of not knowing the facts.

Anon @6:47 61% of the American people didn't want Jewish refugees in America in 1939 either. What Americans are showing again, as they did in 1939, is fear, cowardice, and irrationality. We all can look at those numbers and understand how wrong, how their fear made them look shameful.

Anne Frank applied for a visa to come to America to escape the Nazis and was denied. She died in Bergen-Belson along with her mother and sister.

Americans love to brag about being the home of the brave. We're not. We're a bunch of frightened pant-wetters. The French are braver than we are. And they've proved it.

Yes because it was so well documented that the German Jews declared war on US and had a decades long history of killing Americans.

YOUR KIND would send back the Jews and scream to bring in Nazi saboteurs.

All things considered, I'd rather live in ... France!

Anon @10:52 your comment is nothing more than a talking point that's been passed around the far right blog shpere and made into a poster. You didn't put a moment of thought into it before repeating it. The mothers, fathers and orphans from Syria are fleeing the very people who are destroying their country. Those refugees have NOT declared war on anyone. They're seeking refuge from a murderous regime.

You don't understand that. But who would expect anything but superficial slogans and misinformation from the same group of people who support Donald "We've got to close down their mosques" Trump?

New Jersey Gov. Chris Christie (R-Bully)...refused to accept reports that the perpetrators of last week’s terrorist attacks in Paris were not Syrian refugees during an interview with CNN on Wednesday.

“I understand that this anti-refugee position is certainly a popular thing to do,” host Jake Tapper told him. “But most of the terrorists here in France appear to be French and Belgian citizens. I know that one of them got into the country embedding himself with refugees, but most of them did not. Most of them were citizens here in Europe and I don’t hear you or any of your fellow presidential candidates calling for European citizens to be banned from entering the United States.”

"The United States Holocaust Memorial Museum condemned the U.S. treatment of Syrian refugees on Thursday and compared their plight to the ordeal of Jewish refugees fleeing the Holocaust.

Over half of U.S. governors and a slew of national and local lawmakers have recently said they would turn away Syrian refugees in light of last week's attacks in Paris. During World War II, the U.S. government rejected thousands of Jews fleeing Europe, fearing they were Nazi spies.

Acutely aware of the consequences to Jews who were unable to flee Nazism, the United States Holocaust Memorial Museum looks with concern upon the current refugee crisis. While recognizing that security concerns must be fully addressed, we should not turn our backs on the thousands of legitimate refugees.

The Museum calls on public figures and citizens to avoid condemning today’s refugees as a group. It is important to remember that many are fleeing because they have been targeted by the Assad regime and ISIS for persecution and in some cases elimination on the basis of their identity."