Fascinating creatures of the sea.


Salps have a complex lifecycle, with an obligatory alternation of generations. Both portions of the lifecycle exist together in the seas—they look quite different, but both are mostly transparent, tubular, gelatinous animals that are typically between 1 and 10 cm (0.39 and 3.94 in) tall. The solitary life history phase, also known as an oozoid, is a single, barrel-shaped animal that reproduces asexually by producing a chain of tens to hundreds of individuals, which are released from the parent at a small size. 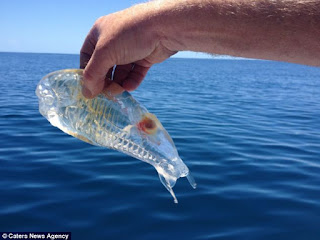 A reminder to all who value science and the scientific method.  The late Justice Scalia, who sat on the most powerful court in America, believed that creation myths were as scientifically credible as settled Evolutionary science.  This is a direct quote from Scalia's dissenting opinion in Edwards vs. Aguillard:


And we wonder why we lag behind other technologically developed countries in science and math scores?  When you have a man sitting on the country's highest court writing nonsensical rubbish as Scalia did in that decision, it's not surprising.  None of what Scalia wrote in that absurd statement is remotely factual.

“reproduces asexually by producing a chain of tens to hundreds of individuals, which are released from the parent at a small size.”

Sea Salps have much to recommend over a humanzee. As miniature versions of their parents, they are born survival-ready and fully independent from Day One.

Consider the advantage of not having to nurse baby humanzees and wipe their dirty little bottoms, or start a tax-deferred college fund just to civilize them, or re-clothe them year after year as they grow bratty, or watch them pop their adolescent pimples. Unburdened by hormonally-driven passion, sea salps don’t co-mingle by force, or lie, or cheat, or demand alimony when things don’t work out.

Best of all, there’s not a single troll among them!

The solitary life history phase, also known as an oozoid

Is anyone else thinking that "oozoid" would be a pretty good term for Scalia?

His blatherings about evolution illustrate how even a person with great depth of knowledge in one field can be utterly ignorant of another field.

i think his priest was blackmailing him with the stuff he gave up in confession.

I see, the reason evolutionary theory has withstood so many challenges and intelligent design has stagnated as a theory is simply because of a great liberal conspiracy.

We know he wasn't sympathetic to evolution in that regard, either.

Zounds abounds! When will you humanzees come to your senses and realize you are not the superior beings you think you are. You think evolution is some hierarchy? Only your fat egos could come up with such a thing. By every other measure, you are neophytes in time -- savage and corrupt. Oozoids and cephalopods have seniority and moral superiority over you. Get over yourselves!