The Banality of Evil


The Moment of Truth; We Must Stop Trump

What about Trump's lies?


He enjoys freedom of speech so he can lie to his gullible supporters, but he's going to go after the media if they don't give him special treatment?

If elected president, Trump promises to intimidate the media and sue the hell out of them if he doesn't like what they say.


TRUMP LIED ABOUT NOT TAKING MONEY FOR HIS CAMPAIGN:

Here are the organizations and people who are giving Trump money. And he's taking it.


Trump not exactly self-funding his campaignThe majority of money has come from donors.

Trump has contributed to financing his campaign through in-kind gifts and loans.

In the third quarter, he made about $100,000 in in-kind contributions to his campaign. That’s in addition to the $1.8 million Trump previously loaned the campaign.

Trump can pay himself back for the loan with campaign funds at any point.


TRUMP LIED ABOUT HIRING UNDOCUMENTED WORKERS FOR HIS PROJECTS:

Sometime between 1979 and 1980, Trump hired a contractor to demolish an old building in midtown Manhattan to make way for Trump Tower.

The contractor signed on workers from a local union and, to meet Trump’s tight deadline, also brought on 200 undocumented laborers from Poland dubbed the "Polish Brigade."

The Polish employees were off-the-books, working 12-hour shifts seven days a week for $4 to $5 an hour, with no overtime. Some workers were never paid what they were owed.

This crackpot wants to crack down on the media for publishing false information?

Will someone please inform the totalitarian jackass about the Bill of Rights.

"For more than three decades, the Republican Party has been turning a large part of their electorate into a population of zombies who respond reliably to specific dog whistles, conspiracy theories and false memes come every election season. These triggers play on religious zeal, nationalism, suspicion of government power, fear of anarchy, economic insecurity, social anxieties, xenophobia, residual racism, and a host of other powerful emotions that exist in all societies.

The so-called Republican elites have learned to exploit these emotions with finesse to win elections while, in fact, serving the interests of their paymasters in lofty mansions and corporate boardrooms. This project, implemented through so-called conservative “think” tanks, talk radio and Fox News with financial support from a few choice billionaires, has been wildly successful. It has allowed the Republican Party to hold the White House for most of the last thirty six years, and to claw their way back to power in Congress after a long exile."

"But the construction of this exquisite system with precise buttons that can be pushed to specific ends has not gone unnoticed. One of those who has apparently noticed with great perceptiveness is one Donald J. Trump, who is not a billionaire because he is a fool. With a deep understanding of the zombification of the Republican electorate, and with the financial resources and the ambition to act on this knowledge, Donald Trump has gone about the business of systematically pressing every button that the Republican Party had built so carefully into their system – except that, in signature Trump style, he has pressed each one ten times as hard as the delicate hands of any Republican political consultant would ever have dared to do.

In recent years, after two humiliations at the hands of Barack Obama, some Republican leaders had begun to understand that the scorched earth approach that had begun with Nixon’s Southern Strategy and culminated in the know-nothing frenzy of the Tea Party was a long-term loser. In a country with rapidly changing demographics and an increasingly liberal populace, a fresh start was needed. Poor Jeb Bush, bless his heart, tried half-heartedly to suggest this by equating immigration with “an act of love”. Then Donald Trump slapped him a few times hard across the face, and that was that. What Trump has unleashed is the monster created by the Republican Party for its own purposes. As always, when the monster gets free, it goes for the nearest prey first – and therein lies a lesson for Democrats."

"And for those who think that Trump will never be able to get away with switching to contradictory positions after getting the nomination, there is a lesson in how he has navigated the Republican primaries. He has made a habit of following up almost every extreme statement he makes with a half-retraction – and occasionally outright reversal – in short order. And he has paid no price for it. This too has perplexed the pundits, but it should not. Trump is not running on policy; he is running on persona. In the primaries, he has become the personification of the Tea Party’s dreams – the very hero they had been waiting for, and heroes are seldom doubted by their worshippers. After all, every deity that humans have ever worshipped has had one attribute in common with all others: Capriciousness. Today, Donald Trump strides across the landscape of the Right like a god who is not bound by trifling things such as consistency or accountability. What terrain he will haunt tomorrow is anyone’s guess.

It is still more likely than not that Donald Trump will falter at some point in his quest for the White House. Hillary Clinton is still more likely to beat him than not in the general election. And there is a distinct possibility that a brokered Republican convention will lead to a third-party run by Trump if the party tries to install another nominee. This too will likely result in a Democratic victory. But the Democrats would do well not to take anything for granted, and begin looking for ways in which they can take down Trump, the Idea."

An honer is what Trump types on an unfamiliar phone. He switched from iPhone to Samsung when the American company decided to take a libertarian stand against the FBI. And Trump hasn't yet figured out how to use the Samsung.

Over the decades the Democratic party has moved right. Clinton and Obama are/were conservative Democratic presidents and have supported what would have been traditional Republican policies.

Since when are gay rights, women's right to choose, universal health care, increasing the minimum wage, and re-establishing relations with Cuba and Iran "traditional" Republican/conservative policies?

In saner times, I'd suggest that voters would tire of Trump and his antics. That they'd begin to see through the fog of his ignorance and bluster and find that there's nothing left but ego and a fluff of orange hair-foam. Sadly, these are clearly NOT sane times so it's more important than ever that we work extra hard to ensure that either Hillary or Bernie gets elected in a landslide this November.

HRC, who has some credibility issues, or Sanders, who is honest but too far left for a majority of Americans, may win in November. But to think either would win in a landslide is merely wishful thinking.

Just when I think Trump can't get any more offensive, he tops himself. This, combined with the excessively long time he took disavowing Duke's endorsement, is just another reminder of his moral rot.

People, it's crucial that we VOTE this November.


An Anonymous commenter came by a day or so ago to tell me how "scared" I was of Donald Trump.

Scared? No. We WANT Donald to get the nomination. Why? Here's why:

Things are getting truly desperate in conservative camps and the grim acceptance that this isn’t a bad dream and that Trump is almost surely going to win the nomination has begun to set in. It’s led to an odd plan. In a stunning report by the New York Times, Republican sources confirm that party leadership is planning to destroy Trump and give Hillary Clinton the win rather than let him have control of the GOP.

To rally depressed Republicans, McConnell has hatched an unthinkable tactical retreat: Let Hillary Clinton win and focus on maintaining control over the Senate. 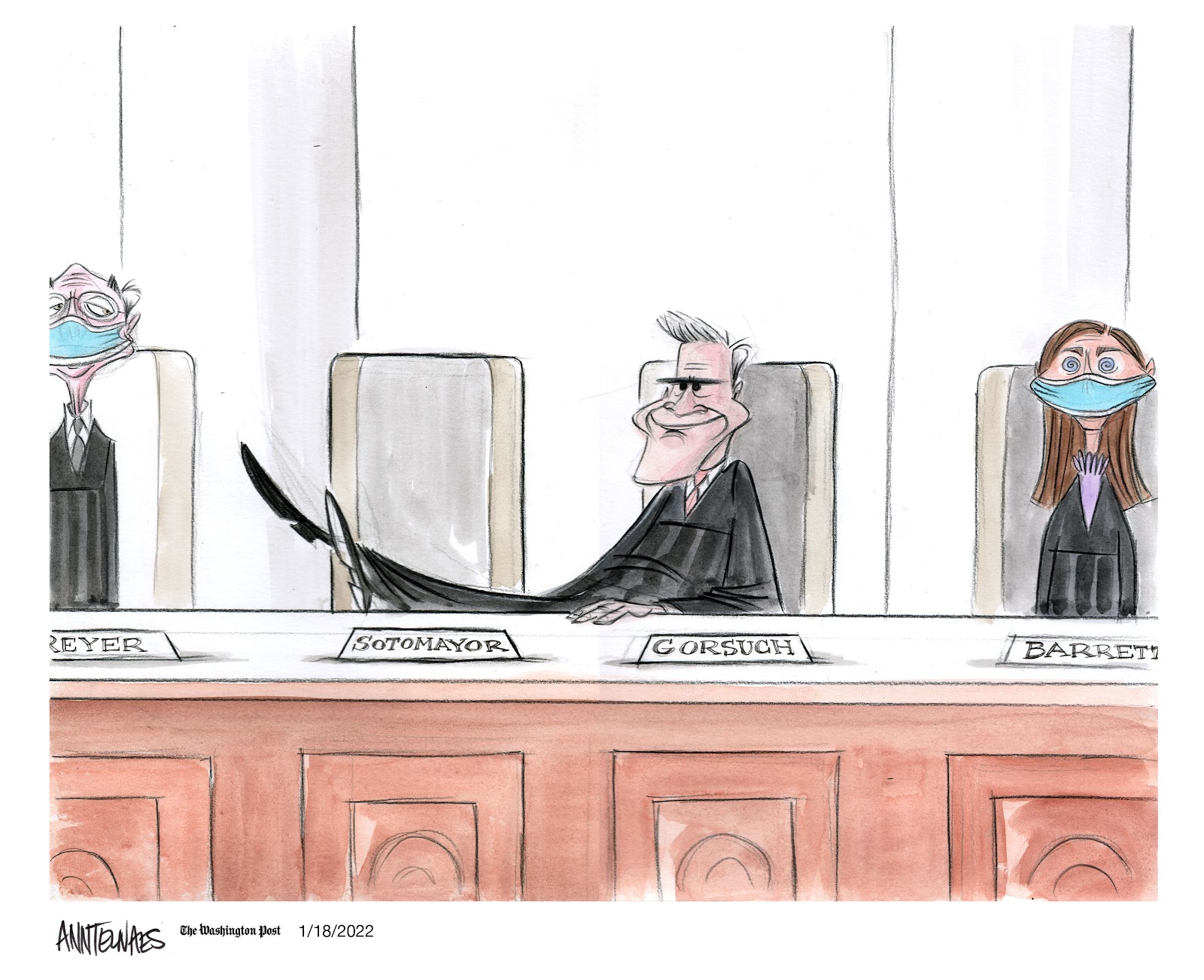 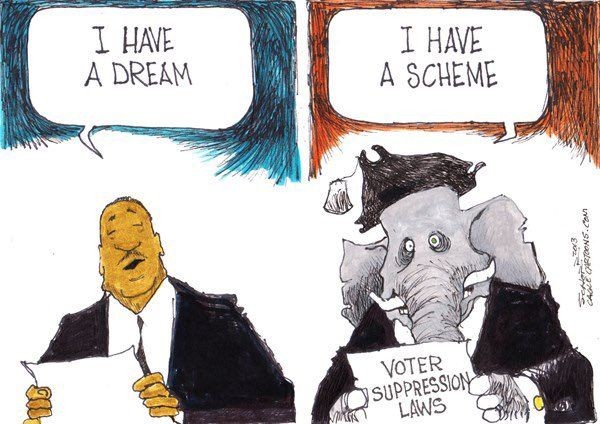