Two More Tea-GOPers Out of the Race 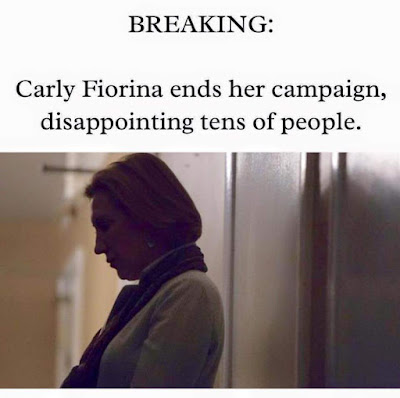 As they winnow out the pretenders and take stock of a party where Trump, Cruz, et.al are the "serious contenders there is talk of a brokered convention.

Can't ditch La Trump
He has indeed made a lasting impression.

I hope there's enough popcorn for a brokered convention.
Their going to punch themselves out before it ever gets to the general.

Christie just might opt for another year. Depending on how 2017-2021 pans out.

RN, are you still a climate change denier as you were in 2010, or have the facts changed your mind?

This thins the herd, at least, but the candidates who are still left leave much to be desired.

It really does not matter whether I, or anyone, is a climate change denier. Why? Because it is a great likelihood that the world's overpopulation, resulting in the lack of food, potable water etc. will result in famine, pestilence, warfare, and eventual extinction of life as we know it.

BTW anonymous @ 12:11PM, I accept the science that our climate is changing. Also that humankind can begin the process of allowing the environment to mend. Now, refer to prior paragraph.