What Makes Him Such A Winner? 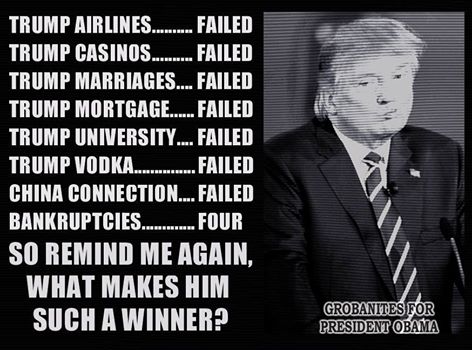 And he loves China:

After looking at that list, I would say it explains why he is a whiner instead of a winner.

Trump, Cruz, Rubio. Hard to imagine any of them as a major party nominee.
But stay tuned for a brokered convention.


Poor JEB! His name wasn't enough to excite the base. They're out for blood. Trump's speech tonight and the other day about killing Muslims were stomach turning.

Trump represents the worst of the USA. Talk about an ugly American!

Trump is for real. I look forward to seeing where Bush, Kasich, and Carson supporters line up behind. My guess is Rubio except Carson's likely go to Rafael (Ted) Cruz.

As for stomach churning, not anymore as nothing surprises me anymore.

The TP bunch is behind Trump because they couldn't get Jerry Springer to run.

Re the So. Carolina primary. These are the folks who voted for La Donald:

20% would support banning homosexuals from the country

47% would approve creating a national database of Muslims

54% would hang the Confederate flag on the state capitol

30% said they wished the South had won the Civil War

It's not surprising that a Neo-fascist like Trump would win big in a state with that many bigoted wingnuts. Let's see how La Donald does in Yuuuuuge states like, say California or NooYawk!

This is only going to get nastier as the Republican primary approaches. Trump will likely win the party's nomination, and then things will get even uglier as he faces off against the Democratic nominee. If he wins the presidential race, God help us all.

Ahab: "If he wins the presidential race..."

Let's wait to see how the Trumper does in the other states. Trump won in New Hampshire, a state hardly representative of the U.S. The mystery is why he won in So. Carolina, a heavily Evangelical state, when he's everything an Evangelical despises. First, he's a pretend devout Christian ("Two Corinthians?") who's been married 3 times (cheated on his first wife with his mistress who became his second wife). How Evangelical of him! And up until recently, he supported a woman's right to choose. Plus, up until recently, he's been a great friend of the Clintons. These are all facts that the rabid righties ignore because, apparently, he's on board with them in their xenophobia, Muslim hatred, women insulting, POW insulting, Mexican hatred, disabled people insulting, Pope insulting, and so on. I know I've left out a number of other groups he's made fun of or insulted. Oh, and he was on board with the conspiracy idiocy that Scalia was "iced" by President Obama!

Think of the people who support this "talking orange yam."

Our political system has worked so well why would we want to change things. Let's keep the the legacy politicians going. Cruzie is more troublesome than trumpeter.
BTW Ahab
The DNC has already selected their candidate and that will be hildabeas,

None of Trumps failures come close to the magnitude and cost of obamacare. How many billions do we need to spend to provide mediocre medical care to 10 million people. It would have been better to expand medicaid and not punish everyone to help pay for obama's legacy disaster.

Obamacare was never perfect because the TGOP wanted nothing to do with the conservative Heritage Foundation plan that became the blue print for Obamacare. You can place the blame squarely on the TGOP for doing nothing to make the plan workable. The TGOP wanted it to fail and fail badly, so they stayed away from anything or any movement to improve it.

With all its warts and problems, it's still better than nothings, which was the TGOP's offering: NOTHING! Oh, wait. Allowing people to buy insurance policies across state lines? Yeah, that was going to save billions of $$$. The TGOP stated very boldly before Mr. Obama took his oath of office that they would obstruct and say NO! to every single proposal he made and every thing he would try to pass. You do remember that little bit of treachery, don't you, skud? So tell us here how in god's green teeth does a president work with people who plot to obstruct and sabotage everything a president wants to do? You tell us. The TGOP said NO! to everything this president proposed and then voted 60 times to repeal what he did manage to pass for the ACA.

skud,
How about giving us your list of a couple dozen other payoff failures?

skud, you trolled my blog again. This post is ABOUT DONALD TRUMP, NOT BARACK OBAMA!

Skud, They represent a very small portion of the total money invested.

Just giving JC an answer to his question.