The Orange-Haired Elephant in the Room

None of the Trumper's supporters want to acknowledge this:

Gallup: Trump Has Highest Unfavorable Rating of Any Candidate Ever

His supporters believe the Trumper will sail into the White House because of those two wins, or even because of his front-runner status in other Republican primary states.

But the fact is that the Trumper is deeply disliked and has a higher negative rating than Hillary Clinton!


Donald Trump has the highest unfavorable rating since Gallup began tracking the indicator for nominated candidates from either political party during the 1992 elections.

Just two days before the Iowa caucuses, 60 percent of Americans surveyed view Trump unfavorably, versus 33 percent who see him favorably.

Trump would start at a disadvantage: Most Americans just really don’t like the guy. Contra Rupert Murdoch’s assertion about Trump having crossover appeal, Trump is extraordinarily unpopular with independent voters and Democrats. Gallup polling conducted over the past six weeks found Trump with a -27-percentage-point net favorability rating among independent voters, and a -70-point net rating among Democrats; both marks are easily the worst in the GOP field. (Trump also has less-than-spectacular favorable ratings among his fellow Republicans.)

And then there's this from The Trumper ( or should we call him "wankpuffin?"), LOL! What a clown! 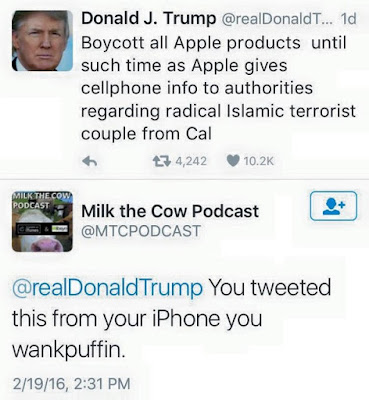 Boycott means don't purchase from. It doesn't mean throw out already purchased items. Plus Apple doesn't provide cell phone service genius
I bet you were for it until you found out Trump was for it

That's not the only definition. Boycott also means this:

verb
1.
withdraw from commercial or social relations with (a country, organization, or person) as a punishment or protest.
synonyms: spurn, snub, shun, avoid, abstain from, wash one's hands of, turn

The Trumper used an Apple product -- his cell phone -- after he barked out his order to boycott all Apple products.


Shaw, that Anon is an escapee from one of those hysterical right wing conspiracy crazed blogs where they believe President Obama is a Marxist Muslim Anti-Christ. It's obvious in Anon's excruciatingly stupid comment.

His negatives may be high but he has enough Gooper support to gridlock the nomination.

A brokered convention is a real possibility.
With any luck the GOP will swallow its tail.


Quite a pickle you folks find yourselves in. You realize you've aligned your self with the likes of Rich Lowrey, Steven Hayes, Jonah Goldberg and Bill Kristol trying to stop the Trump Locomotive, to absolutely no avail. What an ungodly paring, the far left and the neocons fighting windmills together as a team.

Speaking of pickles, Anon. Look at the pickles you're in bed with by supporting the neo-fascist Trump:

Trump has a 35 to 40% of the GOP votes. That means A MAJORITY don't support him. And his negatives are worse than Hillary's!

Talk to me about pickles and windmills!


The facts are Ms.Shaw, Donald J. Trump will be nominated much to the consternation of you folks and your buddies the neocons. Watch today when Mr.Trump sweeps through Navada.

You can continue whistling past the graveyard and hoping your extremely flawed candidate doesn't end up wearing an orange jumpsuit and an ankle bracelet.


We pretty much know that Trump will be the GOP nominee. Consternation? We've been praying for Trump to be the Gooper nominee. Even people who don't pray have been praying.

The only orange we'll see this election cycle is the blob of it on top of the jackass's, (who'll win the Gooper nomination), head.

Did you miss this anonymous @ 6:05 PM?. Gallup: Trump Has Highest Unfavorable Rating of Any Candidate Ever

Looks like he has a 40+ favorability rating with Nevada Goopers.


Trolls coming to P.E. not knowing how to spell Nevada: Priceless!

Interesting...the troll doesn't mind that the worst of humanity -- white supremacists and neo-nazis --are supporting Trump? I know they're angry and unhappy whiners with low-IQ's but I didn't know they'd brag about it.