A Tale of Two Presidents 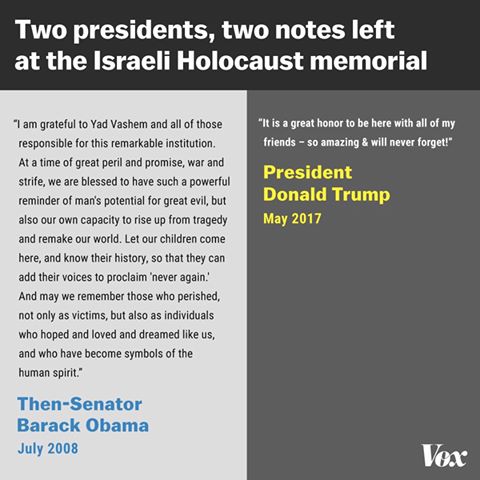 The word “trump” formerly was a verb used in polite bridge and whist circles. Trump, the man, is now up there with Hercules and Sisyphus with his own branded adjective. I’m not completely sure what it stands for. But when it finally settles into the lexicon, I’m certain that it will be a disconcerting combination of petulant, preening, ignorant, shameless, vulgar, paranoid, vainglorious, reckless, imperious, impulsive, unhinged, callous, corrosive, narcissistic, intemperate, juvenile, disloyal, venal, chaotic, squalid—what have I forgotten? Oh, yes!—and just mind-numbingly, epically incompetent.

The thoughtful, intelligent, insightful Obama -vs- Donald The Dunce.

I can’t believe even some Conservatives are talking about impeachment…NOW? 4 MONTHS after the inauguration? Why Our Dear President Trump and his lovely wife have been the very models of good Christian Conservatives. They represent what we admire in our Christian politicians and wives. This impeachment business will go nowhere. The tiresome Liberals are nothing but trouble making goblins and they will regret the mischief they are trying to perpetuate. Tsk!
Tsk!

Lady, I like that they feign ignorance claiming to have had no idea about DJT.

This is an example of the glaring difference between the Trump and the Obama presidencies. That difference is preparation and planning. Trump knew that whatever he wrote would be seen by the world. Rather than prepare something inspirational, he chose to wing it (or that is the best that his staff can come up with). This is just a small example of how poorly prepared Trump is to be our president.

The pope not only looks not happy, he looks angry.
Trump is a failed student of the Dale Carnage course on how to win friends and influence people. Get a clue Donald, going around pissing people off is not the way to get them to do anything but dislike you. Although, getting to Pope to show anger is quite an achievement given the Pope is such a loving man.

John Pitney Jr., a professor of American politics at Claremont McKenna College and former Republican operative, changed his registration to independent. He writes:

"From the start of the campaign, I knew that I could never vote for such a person. Trump is a mashup of all the sorriest parts of Republican history: Herbert Hoover’s trade policy, Warren Harding’s incompetence, Charles Lindbergh’s dictator worship, and Joseph McCarthy’s dishonesty."

Trump's fans, of course, never see him for what he is. They too invested in their horrid choice to ever admit they were so easily conned.

We should rejoice to see how many more ex-Goopers will join with Mr. Pitney in leaving the GAPOT.*

I REALLY miss the Obamas. It was nice having a President and FLOTUS we could be proud of.