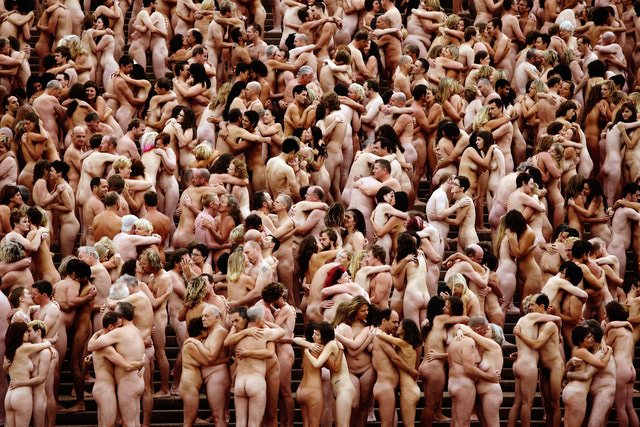 
Never let the American people forget what these S.O.B.s want to do to them. Never!
This isn't a done deal yet. This has to go to the Senate.

Never let the American people forget what these S.O.B.s did to them. Never!

We won't. They've just handed us our ultimate weapon to use against them for November 2018. And remember, in doing that, they haven't even actually repealed the ACA yet. They still have to get something through the Senate that the House Freedumb Caucus can stomach. That won't be at all easy.

WTF is that photo? I picture a Republican celebration as fully-clothed Morlocks chowing down on the raw flesh of their sacrificed constituents (pretty much what they did with today's vote, anyway).

Infidel753, that photo is some naked day celebration in Australia. I'm just trolling the tight-ass Goopers.

Wait till the Goopers' constituents start to feel the pain this bill will inflict -- if it's passed. The House Reps are gerrymandered so they don't worry about losing their seats, the Senate is a different story. We'll see what happens.

Shaw, it was a virtual tie in the House and may not get through the Senate.
There is reason to be optimistic.

You know how you can tell that it is a picture of republicans? Not one guy in that picture has a boner.

You know they are really hard up for something to celebrate when they celebrate a bill that barely passed, and is not becoming law without getting passed by the Senate, the same Senate that has said it will ignore the House bill and write their own.

They can party now. Just wait for the hang-over...

Shaw, there won't be any GOP handwringing or feeling bad. Trump campaigned on this and they trust him to, in the end, do the right thing.

Why that is, I'll never know, but they do.

Look, they're the honking that once those other freeloaders get off the dole, they can get their share.

They will be stunned when the sun comes up...

What sort of people "celebrate" a bill that would hurt the sick, the young, the old, middle class Americans, and most shockingly, veterans? The image of House republicans having a beer party over passing a bill that would devastate the health of almost all Americans while enriching the already rich was seen around the globe.

It's a perfect representation of the deranged GOP, led by a man whose mental health is being questioned by experts.

There is reason to be optimistic that it will not get through the senate. They need to just keep obamacare and hang it around the neck of democrats. Remember Schumer's comment, if they change it they own it and we would love to get it off our backs.

Ironic how many millions of people were against obamacare, cost the democrats the presidency, and now there are millions who don't want it changed. Could the vitriol be caused by the media as part of fake news. Unlike obamacare, the voters and congress will be able to see this bill before they vote on it.
I for one hope it dies in the senate.

Shaw, What sort of people? As we have seem, REPUBLICANS. They care more about a tax cut for people earning over $200k per year than they do for "the sick, the young, the old, middle class Americans, and most shockingly, veterans". Virtually everyone of the republicans who voted for the bill voted themselves a tax cut and their big donors a tax cut.

skud: "They need to just keep obamacare and hang it around the neck of democrats."

Please do. Obamacare is more popular than trump. Trump's approval is 40%; Obamacare almost 70%.

You must be living in a bubble if you think a plan that has almost 70% support by the American people is a bad thing for the Democratic Party.

skud: "Ironic how many millions of people were against obamacare, cost the democrats the presidency."

S.K> Again, skud has his facts wrong. Obamacare passed both houses in 2010 and was deemed Constitutional by the SCOTUS, and Mr. Obama was re-elected in 2012. Obamacare did NOT cost President Obama the presidency, he won it. Again!

Please get your facts straight before you post GOP talking points.

skud,
If you are going to quote someone, you should get it right. You wrote, "Remember Schumer's comment, if they change it they own it and we would love to get it off our backs."

Actually, what he said is "If they repeal without a replacement, they will own it. Democrats will not then step up to the plate and come up with a half-baked solution that we will partially own. It’s all theirs"

He did not say, "we would love to get it off our backs." The fact is that he embraced Obamacare and wanted to make it better.

Re: "I'm just trolling the tight-ass Goopers"... Shaw and Progressive Eruptions is something those who comment on WYD are obsessed with. Although, according to one anon, the opposite is true. Shaw is obsessed with WYD and directs her followers to travel on over there for the purpose of "writing these sick messages". If this is true I'd just like to put it out there that I'm willing to accept any assignment Shaw would like to give me.

Ha! Dervish. They assign such powers to me! It's an insight to the way they think, isn't it?

Most of Lisa's fanboys are barely out of their prepubescent, undescended stage. It's so cute.