THE SHOVE SEEN 'ROUND THE WORLD

The GOP's president, Donald "Russia" Trump doing what he does best: Being a narcissistic jerk.


Watch him shove Montenegro Prime Minister Dusko Markovic aside and push his way into the front row so that the cameras can be on him.

Donnie Russia is an international embarrassment: 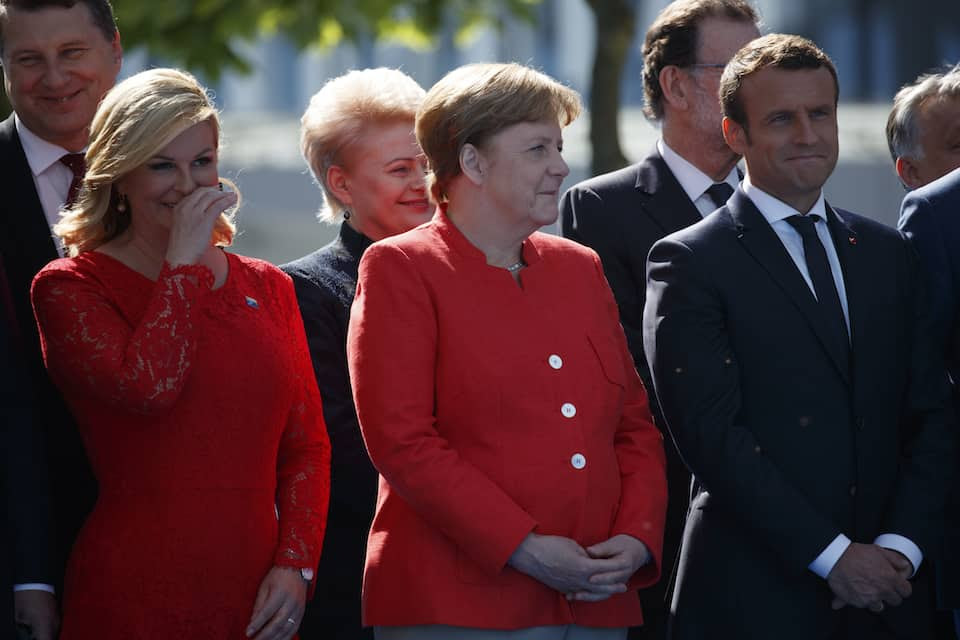 No longer a Republican said...

Disturbing... something you'd see from a grade schooler.
~~~~~Trump makes the movement to the front of the group with no apparent reason why, other than to be in a prime spot for a photo-op. He shoves aside one man Dusko Markovic , the Prime Minister of Montenegro. Then, Trump plants himself in the front of the group, and proceeds to talk to no one and just stand in place.~

"el Douche's such a f**king CLASS act, innit?
Photo-bomber(-cum-pussy-grabber)-In Chief::
One is not surprised when "dumb" animals, like squirrels, or seals, or dogs do it.
But it does appear a bit unseemly for the Chief Executive of the Most Powerful Empire EVER, to be elbowing aside "inferiors" for a prime position in the group photo..
He is SUCH a dick."

What a crude, uncouth, shameless idiot,


Hey, lucky he didn't kick the guy in the ass.

Move aside... Jackass coming through! LOL!

He is disgusting. I'm so embarrassed that he's representing us. Luckily, most Europeans know that most Americans do NOT support this lying, blowhard idiot.

Trump showed no respect for Angela Merkel, leader of the country with the world's fourth-largest economy, never mind the leader of a country's he's never heard of. He probably thinks Montenegro is a blackface version of Monty Python.

He respects only autocrats and thugs like Putin, Xi, and Duterte. He'll never be seen shoving them.

Doesn't he even prep for these things? Is it just him or is his staff as incompetent as he is? This is truly an amateur operation.

More nincompoopery from the Nincompoop of the US:

Trump Reportedly Wants to Stop Germans From Selling So Many Cars Here, Where They’re Made

Donald Trump had some tough words for the Germans at the NATO summit in Belgium on Thursday. “The Germans are bad, very bad,” he reportedly told Jean-Claude Juncker, the president of the European Union. “Look at the millions of cars that they’re selling in the USA. Horrible. We’re gonna stop that.”

It is certainly true that Germany runs a big trade surplus with the world and with the United States. (Last year, the U.S. trade deficit with Germany was nearly $65 billion.) But Trump can’t stop the German cars from coming in to the U.S. because, to a large degree, they’re already here. See, it turns out that many “foreign” cars are actually made in the U.S. while many “American” cars are made in Canada and Mexico. That’s how globalization works today.