Accepting Trump's thuggery leads to this: 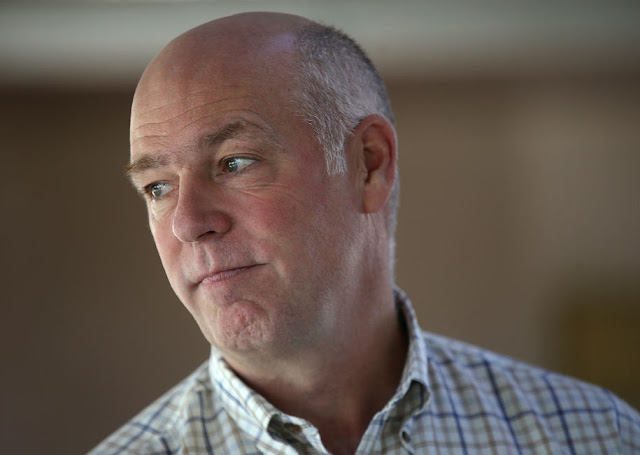 From Alicia Acuna, who witnessed the event, along with Fox News field producer Faith Mangan and photographer Keith Railey: During that conversation, another man — who we now know is Ben Jacobs of The Guardian — walked into the room with a voice recorder, put it up to Gianforte's face and began asking if him if he had a response to the newly released Congressional Budget Office report on the American Health Care Act.

At that point, Gianforte grabbed Jacobs by the neck with both hands and slammed him into the ground behind him.

Faith, Keith and I watched in disbelief as Gianforte then began punching the man, as he moved on top the reporter and began yelling something to the effect of "I'm sick and tired of this!" Jacobs scrambled to his knees and said something about his glasses being broken. He asked Faith, Keith and myself for our names. In shock, we did not answer. He then said he wanted the police called and went to leave. Gianforte looked at the three of us and repeatedly apologized. At that point, I told him and Scanlon, who was now present, that we needed a moment. The men then left.

You should read the FOX News story on this. Even their team was disgusted.

Yet, I predict it won't matter. He will still win as this will only energize family values voters who
hate the "enemedia."

If he's elected, I wonder if a conviction would prevent him from serving in Congress. If so, there'd presumably be yet another special election.

Bengazi, Bengazi, Bengazi has turned into Russia, Russia, Russia. All about diverting attention the issue that the same person was involved in both. -H- lack of action in Bengazi and her using her server to post emails. The leftist blame Russia for leaking information on -H- email that were in fact hers and her careless handling of classified information. Last time I looked, Russia is not an enemy of the US, that is what Obama believed and that hasn't changed. Why not just send Iran a few hundred million so they can continue to be our enemy but with compensation.

Again, when FOX News calls out conservatives, you know the apocalypse is near. Next we're gonna hear that Clarance Thomas sided with the liberals in saying the GOP gerrymandered districts to dilute opportunities for people of color to win elections.

Oh wait, that did happen. In North Carolina.

As RN says, pass the popcorn...

Jerry, Trump will probably pardon him and make him press secretary after getting rid of Spicer


skudrunner, your snark again reveals your astounding ignorance of the Trump-Russia burgeoning scandals.

Coming here and changing the subject to BENGHAZI! won't work. Also, you fail to mention that the GOP Congressional committees found no criminality against Hillary -- and they mightily tried -- in the BENGHAZI! tragedy. There is no comparison to what the Trump campaign allegedly did with Russia and with what Russia allegedly did with the Trumpistas.

You are also ignoring what everyone in this country and the world saw with their own eyes and heard with their own ears: The hapless POTUS telling the world that he fired the FBI director so that the Russia investigation would stop; that the hapless POTUS bragged to the Russians in the Oval Office that he fired the FBI director to "take pressure off" of himself and the scandal.

The Hillary-BENGHAZI! tragedy doesn't come close to what the idiotic POTUS has done in just those two instances -- and he has dishonored the presidency in more of his bungling incompetence. Just recently we heard that in addition to the hapless POTUS giving away intel to the Rooskies, he just told the Philippine President Killer Thug about the position of American submarines near Korea.

That you can come here and try to redirect the discussion to Hillary is pathetic and more evidence of how dishonest and epicly hypocritical the current GOP is.

Donald J. Russia has done more to give aid and comfort to our enemies than Hillary could ever dream of.

Don't take my word for it, skud. Donald J. Russia is bleeding support. He's losing many from his base -- soon he'll be left with just the hardcore Trumpistas, his daughter, and his wife. And we're not too sure about Melania either, apparently she doesn't even want the creep to touch her.

He never had me as a base supporter but -H- would have been far worse. The press has taken rumor and accusations as truth. If they treated every side equal, truth based on rumor, Bill Clinton was a serial rapist and had several people snuffed. I did not say -H- did anything criminal just careless and now she blames Russia for exposing HER emails stored on a non secure personal server.

So far nothing has been proven about DJT doing anything illegal, stupid maybe but not illegal. And -H- and Bengazi, DJT has not caused the deaths of four Americans. If you have proof of POTUS giving away critical intel I am sure MSNBC would love to see it.

I would have loved being that supporter. The outcome would likely have been a bit different. Self defense ya know.

skud - "Last time I looked, Russia is not an enemy of the US, that is what Obama believed..."

skud,
You are a little mixed up once again. It was not Obama that said Russia was our enemy. It was Romney, a republican, not a democrat.

As usual, Skid lapdances for the radical right. Yawn......

Skud... your understanding of the potential issues on the Russia investigations are huge.

We investigates Benghazi, and by we, I mean the GOP Congress and Senate and they found nothing criminal. Yes there were mistakes and people died. But criminal behavior? Hardly.

Now we have a President admitting he fired the FBI chief for even looking into any connections. Since we have at least 4 people who gave false info when they filled out conflict of info forms, on background checks, or in interviews, as well as in public, an investigation seems warranted.

The public attempt by Trump to end this investigation, clearly shows at least a hope of impeding that investigation. Or to obstruct justice, an impeachable offense.

Thankfully when this happened during the Nixon Admin, his own party ultimately came to their senses and went to the Pres. WHo today will Trump listen to if and when that moment happens?

"Bill Clinton was a serial rapist and had several people snuffed."

That's a g-d lie. Why do you allow that liar to post here Shaw?