File under "You Can't Make This Stuff Up!"


Instead of governing the country, this man-child watches comedy shows and seethes when he sees comedians parody him.

In the past, normal presidents either chuckled at the parodies or ignored them. Every president since Saturday Night Live came to television has been parodied, from Chevy Chase's Gerald Ford, to Jimmah Carter, to Ronnie Raygun, to George H.W. Bush, to Slick Willie (Big Dog), to Dubya, to Barack "Big Ears" Obama. Every one of our presidents.

Trump, however, is the first president I remember who has no sense of humor and who whines, pouts, and has hissy fits whenever SNL (or anyone) does a comedy routine about him, his administration, or his family. He's humorless and clueless and shows himself to be a thin-skinned WATB each time he bitches about comedians acting like comedians.

His anti-American instincts to want to shut down or shut up anyone who mocks him is EXACTLY what dictators all through history have done to people who satirize or criticize leaders for a living.

Trump and his cultists would love to see the government destroy anyone who dares to portray him as he is: A loud-mouth, ignorant, corrupt bully.

Happily, this is America. He can't do that. All Trump can do is stamp his feet and bray like the weak little jackass that he is. 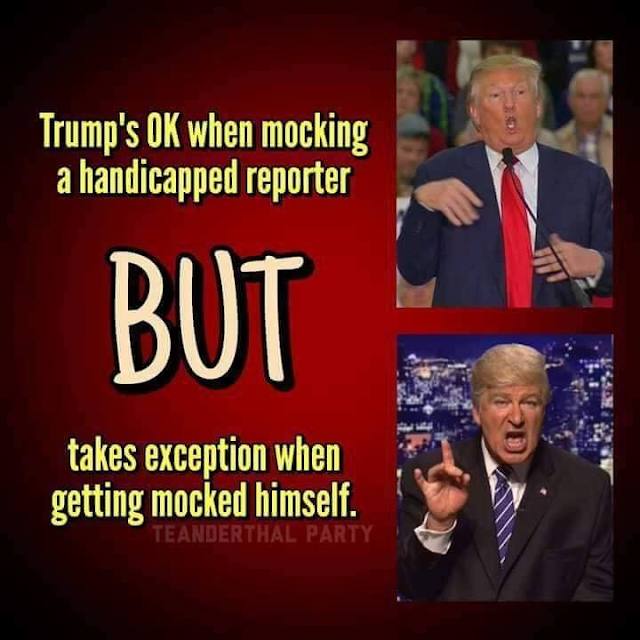 He's got bigger problems than SNL.

And, of course, that's leaving aside the Southern District of NY and soon to be AG Letitia James. Mueller is becoming almost an afterthought. The wind cries 'witch hunt.'

Need anything else be said?

The fake prez in our White House called a witness in the Russia investigation, a RAT!! Wtf is that?? He’s a slimey Effin mafia boss masquerading as an American President!

From MiddleAmericanDemocrat: "...Trump’s tweet portrays something much darker. In response to having his feelings hurt by Saturday Night Live, Donald Trump suggested that it should be illegal for Saturday Night Live to make fun of the President, and illegal for the press to report negative stories about him. This is, of course, a ridiculous suggestion. The United States Constitution protects both Freedom of Speech and Freedom of the Press.

Today Flynn is being sentenced for lying to the FBI. I can't help but LMAO every tinme I look at THIS!

Crooked Trump and his administration is going down. LOCK HIM UP!

As part of the agreement, the Trump Foundation will dissolve under judicial supervision. It will also be required to distribute any remaining charitable assets to reputable organizations approved by Underwood’s office.

Underwood’s lawsuit seeks millions in restitution and penalties. It also seeks to prevent Trump and his three eldest children ― Donald Trump Jr., Ivanka Trump and Eric Trump ― from serving on the boards of other New York charities.

The president vowed shortly after Underwood’s lawsuit was filed to fight the case, calling it the work of “sleazy New York Democrats.”

I thought the injunction against Fredo, Connie and Sonny serving on other boards was a nice touch although I wonder who would want them.
I believe he said he wouldn't settle the Trump U. case either.

I wonder if this gives us a hint about the next SNL cold open? The mothership is upset that SNL is so unfair to tRump and actually wonders if he should sue.

Meanwhile, don't lose sight of Zinke leaving just ahead of a grand jury. It's all finally starting to unravel. Such a parcel of rogues.