This is the person the people who voted for Trump call "stupid." On her worst day, she is, smarter, more articulate, and relevant than Trump could ever dream of being. And she's going to be a star! 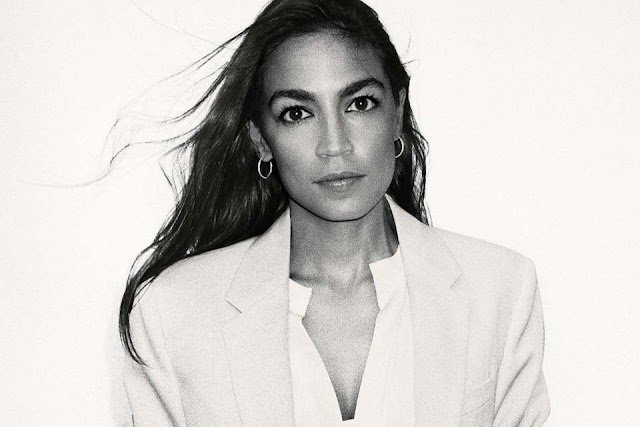 Alexandra Ocasio-Cortez won second prize in the Intel International Science and Engineering Fair with a microbiology research project on the effect of antioxidants on the lifespan of the nematode C. elegans.

In a show of appreciation for her efforts, the International Astronomical Union named a small asteroid after her: 23238 Ocasio-Cortez.

Ocasio-Cortez had a John F. Lopez Fellowship. During college, she served as an intern in the immigration office during the final year of U.S. Senator Ted Kennedy’s tenure.

Better make sure that the people that you attack aren’t out of your league. Those who call her names and put her down are intimidated by her intelligence and are afraid of how hot her fire burns.

Jeff Tiedrich‏ @itsJeffTiedrich
right now some Deplorable is driving a crappy car on crumbling roads past abandoned storefronts to a low-paying job and working himself into a frothing rage as he listens to some hate-radio screech-monkey telling him all about how Alexandria Ocasio-Cortez is going to outlaw cows
6:53 PM - 6 Mar 2019

Let's just say what we know to be true: like Arkansas Governor Clinton's wife, Hillary, the young Ocasio-Cortez is on a trajectory that the GOP feels a need to take shots at early and often. It really is that simple. Assuming she continues on her way, she will either replace Schumer in the Senate or Cuomo in Albany. Either way, by the time she pays the next level of dues and is over 35, the GOP will make sure there are all kinds of rumors and innuendos out there about her to stir up trolls and bots against her.

Watching the GOP is like watching a slow-motion train wreck, you know it’s going to happen, your just waiting for it.

Your latest flavor of a political messiah?


No, Anon. AOC is just one of 535 Congresscritters. It is the failing GOP that's lost its shyte over her. Why? Because she has star power and is smarter than the dud they put in the Oval Office. The GOP is deeply embarrassed that a 20 something year old junior Congresscritter outshines the half-wit Trump.

The GOP can't quit her.

Clearwater, it's true. But watching it implode is not unexpected when they hitched their hopes and dreams to a corrupt half-wit.

The more the Goopers talk about AOC the more we understand that she makes them poop green bricks of fear.

She has star power and the Goopers know it.

AOC restores my faith in the young.

A star? I seriously question that. Putting that aside it is frankly too soon to make that prediction. But hey, what do I know, right?

She's a "star" because the Goopers can't stop talking about her.

She's getting more attention than a normal newbie Congresscritter would get. And by even sane Republican pundits' opinions, she conducted herself quite professionally during the Cohen hearing, forgoing histrionics and concentrating on intelligent questions that set up reasons for looking into Trump's taxes and other financial considerations.

jono, I agree. She's done quite well so early in the game.

Alexandra Ocasio-Cortez won second prize in the Intel International Science and Engineering Fair with a microbiology research project on the effect of antioxidants on the lifespan of the nematode C. elegans.

That's impressive all by itself. Not many legislators have the interest or ability to pursue science to that kind of level.

Meanwhile, a Republican Senator three times her age brought a snowball into the building to bolster his claim that there's no global warming. They truly are the stupid party.

She has proven that the American Dream is still alive or maybe you can fool some of the people all of the time. Her ideas are outrages but that is the way she gets attention. If she was a conventional political hack she would just be another freshman in the house There is all this visceral reaction about trump not having his facts but cortez makes him look like a genius.
Her socialism play is not favored by the majority of Americans and there are not enough billionaires to pay for her idea of free for all. Unfortunately she will be corrupted by the lobbyist purse but she is a fresh, if not uninformed voice.

Infidel753, the TrumpCultists are so obsessed with AOC that it's an excellent indication that they envy and fear her at the same time. Her performance at the Cohen hearings got high marks from everyone, except the people who continue to protect Trump's ciminality.

skudrunner, you really should listen to or read more than far right news outlets. AOC's ideas are NOT "outrages." They are mainstream, what you and the Mother Ship crowd call "Soshallist."

The vast majority of Americans, 70 percent, now support Medicare-for-all, otherwise known as single-payer health care, according to a new Reuters survey. That includes 85 percent of Democrats and 52 percent of Republicans. Only 20 percent of Americans say they outright oppose the idea.


National polling conducted in February by PSB Research for the Campaign for Free College Tuition reveals that fully 8 in 10 Americans (81%) want their state to provide free tuition to public colleges and universities to any academically qualified student.

Even more striking, that powerful support has held steady since PSB last polled Americans in November. This new research reflects consistent growth in public support for free college tuition since CFCT and PSB first studied the question in late 2016.

The survey suggested eight different reasons why state provided free college tuition is a good idea and most of the representative sample of 800 Americans interviewed found each of them to be believable and persuasive.

One message especially resonates with those polled: Lack of money shouldn’t keep qualified students from going to college, and my state should help. 8 in 10 Americans find that message believable (81%) and persuasive (79%). Even more impressive, most Americans call that argument very believable (54%), and half say it’s very persuasive (49%).

What do you say to those facts? What you wrote is nothing but chewed-up and spit-out far right LIES. I'd be careful if I were you about how Trump's mendacity is infecting you and your fellow travelers on the Mother Ship.

A quick look around the usual Trumpie blogs shows that they're obsessed with AOC and devoted an entire blog post about her and the head of her PAC who diverted money to his own slush fund. The holier-than-thou Trumpies couldn't wait to post about that story, but that same blog ignored the Cohen hearings.

Michael Cohen was Trump's PERSONAL lawyer for 10+ years. Cohen cheated, lied, and paid hush mone to Trump's several mistresses and he intimidated and threatened people for Trump for 10 plus years and his testimony could get Trump's large orange ass impeached for obstruction of justice.

But the holier-than-thou Trumpers ignore all of that and are losing their shit over AOC.

Ms Shaw, you should know by now that polls are not real accurate and one by PBS is a little slanted. Depending on what polls you look ate there is a wide swing in opinion. Ask the providers what they think of Medicare for all. Without providers we all suffer and as of now a small percentage of the population does not have health care.
Almost forgot everyone on medicare paid for it for years and still do so it is not free. You like to fly off to exotic destinations and you will have a hard time doing that if AOC gets her way of doing away with fossil fuels.
Medicare for all, free tuition, guaranteed income even if you choose not to work, open borders, do away with ICE are all great ideas but can you inform me who will pay the bill. All this has not worked well for Venezuela, Cuba and Greece. England's healthcare works well because you can pay for medical care if you choose but everyone has healthcare.

They have a lotta shit to lose.

skudrunner, you don't believe the polling reported by PBS? Show us your evidence that disputes it.

I think she's the new prime target for the simple fact that if she gets anything close to what she wants, (and she's already proved she's effective at communicating her views and persuading people), rich people will become less rich. So they give the green light to their Fox "News" spokespeople to go after her and the conservative sheep follow suit.

Simply put, she scares the rich, ruling class so they put her in the proverbial crosshairs.

Ray, regarding the accusations concerning AOC and the "Brand New Congress" and "Justice Democrats" PACs (which hired an LLC that was apparently run by her boyfriend), NBC News reports that, "while the structure of her campaign and its vendors might be confusing, it's not illegal".