Trump cultists outraged that Chris Wallace called out Trump on a lie!

They're angry because Trump didn't get away with more bullshit about Joe Biden.

They're not angry that Trump was uninformed and a bullshitting liar.

They're angry because Chris Wallace made a fool of Trump.

Cultists will always defend their cult leader, even when that cult leader is a malignant liar, cheat, and fraud.

Never let them forget their disloyalty to America and their allegiance to a cheat, fraud, and malignant liar. 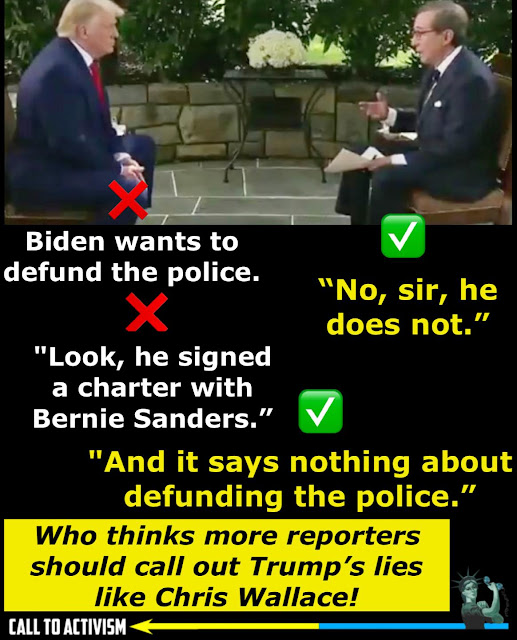 Chris Wallace may not his father Mike Wallace, but he IS one of the very few FAUX News reprters who I beleve. My respect foe Chris Wallace has risen over the years and this was a home run for Chris in my book.

If you want the Republican Party to pay attention to you, you have to be either an embryo or a Confederate statue.

RN, Agreed. But the Trump cultists blogs are p.o.ed at Wallace, not at Trump for being a liar and bullshitter. We must never let them forget that they continued to support an ignorant, anti-American dictator wannabe when the rest of the country and world saw Trump for the disgrace and disaster that he is. Those people are not smart enough to see through Trump's b.s.

Indeed. It is looking more and more like tRump will maintain only his 30%-36% base of cultists who would support any tyranny so long as their tin pot idiot leader says it's gonna MAGA. They're just that naive or stupid. Take your pick.

Shaw... of course they are not upset at Trump for lying. Let's go back to Sarah Palin when she was asked what she read...

The right was not aghast at her inability to answer the question, they were mad at Katie Couric for asking the question. because they saw it as a "gotcha" question. It is never the answers, as bad as they can be, for these folks, it's the questioners.

And because the questioners are evil, any answer, even a problematic one, given by conservatives in these circumstances, is acceptable. Because it's all you can do to battle evil.

If you read those blogs, the HMS Mothership being a great example of "conservative think" today, you will see that Donald Trump does not lie. He speaks "untruths".

Because the really evil people are the Katie Courics and the Chris Wallace types of people.

Anon: Or a billionaire.

You don't need a Chris Wallace to make a fool of trump or biden. They are both equally capable of making fools of themselves.
The difference is trump things he knows everything when he doesn't and biden doesn't have any thoughts other than what is written for him.

As Americans we should be able to d better than dumb an dumber.

bluzdude, yeah. Forgot that one.

skudrunner, you're showing off your ignorance again. You are unalterably wrong about Biden.

He spoke several time on important subjects without sounding like a demented fool. Apparently you don't watch his speeches, so you write bullshit about Biden -- kinda like your president.

and just five days ago:

Why should anyone believe anything you write about Joe Biden when it is so massively obvious you don't know what the hell you're talking about. Just spouting bullshit about Biden makes you look like Trump.

Not a good look.

Ms Shaw, I do realize that yellow dog runs deep but you are intelligent enough to know biden has never been capable of anything other than being a cheerleader. He has been in congress in excess of 40 years and co-signed on bill has taken a losing position on almost all issues of national importance and is suffering from dementia which is a product of age. He read a speech and took no questions. When asked a question he babbles because he cannot remember the answer.

I do realize trump is not the answer but biden is not either and we should demand better. I would support Kasich for president because he makes sense, trump and biden do not. It is time for the voter to say to the DNC and RNC give us a competent candidate. The DNC told the -H- to sit it out so obama could win and they can do the same thing with biden. The RNC has never had the guts to do anything so they are a lost cause.

George W Bush has directed his GOP Super PAC to redirect all funds to help Joe Biden and defeat Trump.

Seems like the only one out of touch with reality is skudrunner. But it's underatandable. He'll be voting for Dotard donnie come November no doubt.

Shaw... amazing isn't it? All of these people, like Bush and Kasich, ppl with whom us libs would argue all day are somehow suddenly RINOs. Not Republicans, not conservatives, not, in the words of the Trumpistas, even good Americans.

Joe Biden will not be perfect. Nor would a ground hog. But at this point I'll take a ground hog over Trump.

And they must remember that they are temporary occupants of the office, not the office themselves. And with that must come some humility.

I see most of that in Joe Biden.

And that is my choice this election. A man who gets close to those ideals on most days, or a man like Trump, who mocks and eschews those values on a daily basis.

Today after months of Covid-19's ravages on the American population, Trump said it's now "patriotic" to wear a mask. This is almost the end of July. This should have come from him in March, April, long before this.

His 180 on mask wearing shows us once again that Trump is not a leader; he's a follower. Biden is a leader.

Biden isn't my first choice, but there's one thing about him that Trump utterly lacks: human decency. Maybe the unbearable losses he's suffered is part of what makes him able to empathize with others who've suffered. There's certainly none of that human decency in Trump.

Many, many real conservatives understand this and support Biden.

All I long for is decency and respect for what America has always stood for. I believe Biden can bring that to us.

skudrunner only sees Biden in terms of "dementia." Like other trumpers, he never understands the humanity that's in him.

5 years of having to live with Trump will do that to your soul.

RN, one of the hardest things for skudrunner to face is the fact that the Republican Party supported and encouraged a despicable ignoramus to lead them.

Dave and Shaw, both of you, with great eloquence, spoke pure, unquestionable truth. You both know that I am less "liberal" or "progressive" (I put quotation marks both because lables have lost their meaning IMO) but I in fact agree with you both 110%. I WILL be supporting Biden with my vote as well as gifts to his campaign. No TRULY honest and rational person can support the human monster known as Donald J. Trump.

RN "liberal" and "conservative" are superseded by the need for decency.

You and I may have policy differences on some things, but I always understood you to be true to your beliefs and above all a decent human being.

Right now, I value that above policy issues. We can argue about those once we get rid of the danger to our democracy.

RN, I never said I voted or would vote for trump. Being an independent I would like a decent choice which has been denied for the last few decades. I do believe the country will survive but will be fundamentally changed. We have survived three horrible presidents One who was totally incompetent, carter, one who had a agenda to represent only his special interests, obama and one who can't get around his massive ego and keep his mouth shut, trump.
I do believe if you have the ability to think you should be an independent, if not pick a party and stay with them right or wrong.

skud: "Being an independent I would like a decent choice which has been denied for the last few decades."

Did it ever occur to you, skud, that maybe YOU'RE the one with a problem? The last few decades? Are you expecting perfection from a presidential candidate? You'll never get it.

What we should never accept is a candidate who starts off his campaign by smearing an entire group of people (Mexicans), and sending his press secretary out to lie on his first appearance before the press corps (Sean Spicer and his ridiculous claims about crowd size on inauguration day.)

From the beginning, Trump has been a pox on our American democracy. And that was brought to us by the Republican Party. We know you get off smearing Mr. Obama every chance you get, but the fact is that despite his flaws, he was a decent, law-abiding president who wouldn't dream of sending paramilitary forces uninvited into only RED states. The fascist Trump has said he would send these illegal forces into ONLY BLUE STATE CITIES.

Yes. The GOP deserves to be destroyed in November and live in political infamy for decades to come.

Your continual lie about Obama being a "horrible" president is a lie you keep telling yourself to soothe your ego. No one, but a few disaffected GOPers who are massively ashamed of what they elected in 2016, beieves it.

Repeating that lie doesn't make it true. It makes you look foolish.