The POTUS is Mad, as in Crazy/Mad.

Below is an actual, untouched quote from Trump's appearance yesterday in the Rose Garden. One hour of total insanity. Trump called a press conference. Instead, it was a flame-throwing, joyless, incoherent babble, meltdown.

This is the definitive example of a mad man in charge of the United States of America. As hard as it may be, if you can force yourself, watch this. It's important to see. 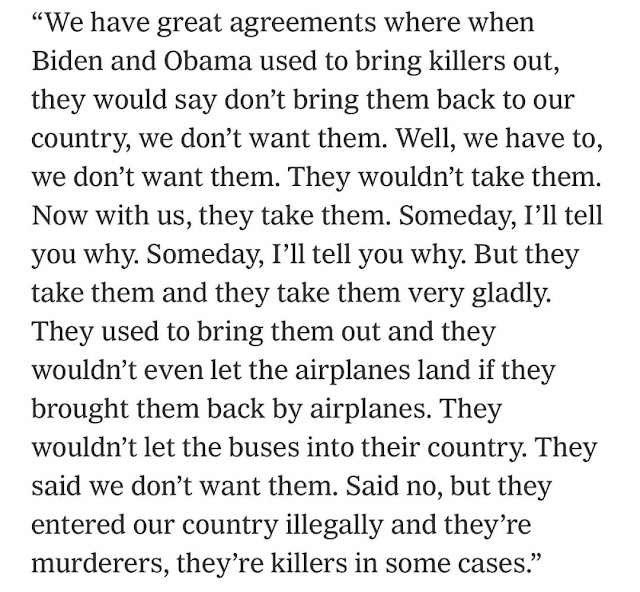 It was like watching his brain rotting right before our eyes. It's just insane, he shouldn't be in high office. Even if he wasn't a crook, he simply doesn't have the mental capacity for the job. But the system is so broken it can't throw him out.

Madness, all of it madness!

And folks say Biden is losing it.

Even the hard news side of FOX was critical of the president for using the Rose Garden for such a blatant political event. But what's a guy to do if Americans choose to live rather than risk their lives to see an uninformed president deliver his greatest hits, as opposed to actual policy positions.

We have made manifest the American doctrine of exceptionalism.

If this country had behaved like Italy or Spain or Germany, we would be starting to go about our normal lives. Instead, we will have years of loss of life and devastation and disruption.

We failed the marshmallow test. I used to have high regard for my fellow Americans. This crisis and this presidency have sorely tested that.

So, it's the so called elite Eastern states--Massachusetts, New York, Connecticut--who have been able to shut down the virus. Could that have anything to do at all with education?

RD and others... want to know why America is losing the Covid battle? Check out this video and what is said by the "Real Americans"

This explains why we're losing the battle

Now class, think back to WW II. The government asked us then to sacrifice, to give up stuff to which we had a right to demand, buy and expect. For the good of, not just of the US, but the world. And we did.

Now ask yourselves this...

What would have happened to this bar owner had he demanded his rights in 1943 like he is here?

I could not listen to all of tRump's disjointed, inaccurate, totally political BS, and lies. How 40% (or thereabouts) of American's can support this narcissitic demagogue who can barely construct an intelligible sentenance is beyong my ability to comprehend.

tRump, if one critically listens to him, is the most POWERFUL advertisement for NOT reelecting him. His niece Mary Trump is correct. tRump is quite possibly the world's most dangerous "man".

Our country is sick, and the GOP's president posed today in the Oval Office with Goya products a flagrantly unethical action, but that's not surprising coming from a corrupt, unethical president. What is shocking is that he would stoop to this sort of antic while America is on fire with Covid-19 and getting worse not better.

This is what happens when a minority of poorly informed people vote for a reality tv show host who bankrupted 6 casinos and cheated on his 3 wives and several mistresses. How anyone thought any good would come from such a deplorable, malignant, classless idiot is still one of America's biggest mysteries.

We are all paying the price for putting this hopelessly sick man in the Oval Office.

FOX News admits, on the hard news side, that conservatives would have gone crazy had a President Obama used the Rose Garden for political purposes like Trump did yesterday.

But today is worse.

That's because President Trump, in helping his daughter in her new role as spokesperson for Goya Foods, tweeted a picture of himself in thumbs up mode in front of a spray of other Goya offerings.

So what's wrong with our president playing spokesperson for a specific brand?

Maybe not much... unless you do it from the Resolute Desk.

Remember how upset conservatives were with Obama's feet up on the desk? I'm sure they'll be jumping off of buildings seeing it disgraced like this.

That is unless they are just a bunch of naked, inconsistent political hacks.

How the mighty have fallen...

Here's one of Trump's latest tweets...

"Joe Biden and the Radical Left want to Abolish Police, Abolish ICE, Abolish Bail, Abolish Suburbs, Abolish the 2nd Amendment – and Abolish the American Way of Life. No one will be SAFE in Joe Biden’s America!"

Somehow in Trump's, and the extremist mind, reform equals abolish.

Perhaps minds smarter than mine can explain what Trump means that Biden wants to abolish suburbs. Aren't all of the suburbs voting for Biden?

When Bret Stephens was at WSJ, he wrote, "The candidacy of Donald Trump is the open sewer of American conservatism"