Those are the words Trump used when he was asked about Jeffrey Epstein's former girlfriend and procurer of children, Ghislaine Maxwell. Maxwell didn't just help Epstein with his sex trafficking of children, she also participated in raping and molesting them, along with pedophile Epstein.

And Trump wished her well. Think about that.

A rabid consumer of news and gossip, Trump certainly knew about Epstein's and Maxwell's degenerate life-style of sexually preying on underage girls. Trump and Epstein were pals, and photos of Trump and Maxwell and Epstein, together at parties, are all over the internet. Trump knows exactly what she is. And he wished her well.

If Trump were a normal person (he isn't, he's a sick and damaged human being) his answer would have been a curt one that said something like: "This is a matter for the courts. I have no further comment."

Do Trump's cultists have a problem with that? No. Not that I'm aware of.

We're really coming down to the point where Trump may actually shoot someone on 5th Avenue (he's promised that his storm troopers will be sent to New York City), and his cultists will remain silent should that happen as well.

As a P.E. commenter has said, none of the people who are left supporting Trump (35%) would have remained silent if a Democratic president had said or done any of these sordid, lawless things:

This week a report revealed that in 2018, Trump tried to get America's British Ambassador to get the British Open played at his golf club in Scotland. That's an impeachable offense.

Trump is a lawless degenerate who's failed America during the worst pandemic in over 100 years. Add to that the fact that yesterday he gave his well-wishes to a woman who procured children for her lover and herself to rape. 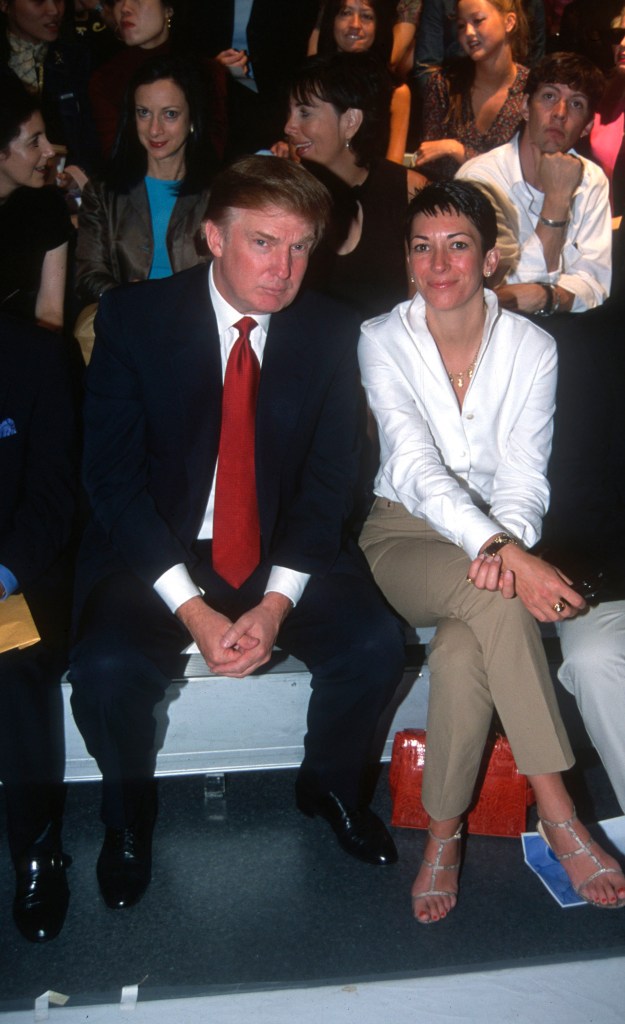 So let me get this straight.

We are supposed to listen to the man who wishes a child sexual trafficker well and who wants to send our kids back to school during a deadly pandemic to a place where he says teachers are teaching them to hate America.

Let's remember how the right tarred the Clinton's for knowing Epstein and Maxwell. The simple fact that the Clintons knew them, in the eyes of the extremists, made them pedophiles.

And now we have our president sending well wishes to one of these alleged child molester. Alleged by his own Dept of Justice. A "Law and Order" president. You can bet all of our conservative "friends" will be all over this, criticizing Trump and admonishing him for hanging around with such people.

Or we can expect silence. But that would only happen if that crowd was nakedly partisan, unable to use their brain and willfully blind to facts.

Dave, I watched the Netflix series "Filthy Rich" about Epstein and Maxwell. I saw the now grown women talk about what Epstein and Maxwell did. And those testaments are in affidavits. Not only did Maxwell procure childre (14 year olds, among them), but she herself participated in sexual acts with them and her lover, Epstein.

Two grown, rich adults raped and abused girls for their deviant pleasures. I never understand why rich and famous men go for vulnerable girls (most of the victims of Epstein and Maxwell who were interviewed were from broken homes or homes where the mother and father or both were addicts.) It depresses me to know that the super rich and powerful, when they have access to anything they want (adult, consensual escort-type women), they choose children for their sexual appetites. Depressing.

Again we see how inappropriate the POTUS is and how he has no moral compass that would have prevented him from saying what he said. A simple "This is a matter for the courts" would have sufficed.

I'm sure Roy Moore wishes her well to. Republicans.....

Don't forget that Trump's most fervent supporters are fundamentalist evangelical pastors, and a lot of them seem to have a thing for the "young stuff" as well. I guess he's gotten used to thinking of such people as "very fine people".

I always wish the best for charged felons who raped and trafficked, groomed and sold kids for sex.

Trump and his 3rd wife partied with Epstein and Maxwell. Trump knew exactly what kind of a pig Epstein was but liked his company anyway. And no, George Soros had nothing to do with Trump's rotten decision to have Epstein and Maxwell as his friends.

The Trumpanzees admire a guy who wishes well for a madam/pimp for underage sex.

Let that sink in.

Is there no bottom to Trump's filth?

If you haven't figured this out by now, you better start to understand this today: No matter how bad you expect things to get with Donald Trump as president, it will always be very much worse.

Making America one underage child at a time!

He should have taken the stance that she is accused and not tried yet so she should be hung at daylight. That would be the correct response because we are guilty until proven innocent and if the hung her early we would save the money of a trial.

What skudrunner and the right wing troll I deleted just don't get is that it was highly inappropriate for a POTUS to "wish well" a woman who is known to have been a pedophile's lover and companion and who not only procured children for Epstein to abuse and rape, but who also PARTICIPATED in those crimes. The young girls who are now women have testified under oath and signed affidavits about these crimes involving Epstein and Maxwell.

Trump is an idiot, basically. He doesn't have any political sense and absolutely no moral compass.

All he had to do when the question was asked is say "This is a matter for the courts. And that's all I have to say about it." Period.

Instead, he wished this dirty, child-abusing woman "well." It makes a normal human being's skin crawl to hear the POTUS say such a thing. It has nothing to do with "innocent until proven guilty." There's already reams of first-hand evidence of what she and Epstein did to children.

But you, skud, and the other Trumper came quickly to defend what Trump said. And that says enough about your values to me.

Donald Trump fired and sabotaged the promotion to further the career of Lt.Col. Vindman. Vindman's crime? No crime.

Vindman answered a legal subpoena and told the truth under oath.

These two things -- Trump's kind words to a woman who trafficked little girls for her pedophile lover and Trump's public humiliation of a Purple Heart hero who's still walking around with metal in his body after fighting for his country show normal people what a repulsive vindictive and heartless monster Trump truly is.

What did we expect from a man who, according to Mary Trump's book, withdrew the Trump family medical insurance from his deceased brother's severely handicapped infant grandson for vindictive, spiteful reasons.

That's the man the current Republican Party supports and admires.

Interesting take on this from the political reporters of the Washington Post (called The Fix) from their online chat today:

"Stay tuned to The Fix for more on this. The long and short of it is that this is a stock phrase that he uses A LOT. But he often uses it in very suspect ways -- on Kim Jon Un, on people who he doesn't actually wish well like his political opponents, on a staffer (Rob Porter) who was accused of domestic abuse), and now on Maxwell. Hers would certainly be the most problematic."

Skud... you and your "conservative" friends are such funny folks. Hillary Clinton has never been found guilty of anything, never been indicted. Yet you guys believe to your cores, and remark on it all the time, that she is guilty of some crime.

Your fellow travelers on the HMS Mothership also claim Barack Obama and Joe Biden are guilty of crimes. Again, even though we've never seen a verdict, much less an indictment. When called on it, most of your shipmates state they don't need to see a verdict to know Obama, Biden and Clinton are guilty.

For any conservative to show up at a liberal 4th amendment, supposed lover of criminal rights blog and lecture us on respecting someone's innocence before a trial is the height of hypocrisy.

You guys dock in Hypocrisy Cove on this issue, even hating how liberals have used the law to grant access to vote, education and lunch counters to people of color.

Dave, perhaps folks like skudrunner and those on the HMS Mother Ship are what is known as cafeteria law and order types. They pick, choose, and assign crimes to whomever is not part of their tribe.

They conveniently ignore the fact that a Republican led committee on Benghazi found Clinton innocent of any wrong-doing, and she also sat for 11 hours, answering their questions. There was no malfeasance by Secretary Clinton in that tragedy.

It's amazing how those same people, including skudrunner, do not hold Trump responsible in any way for the deaths of 140,000 Americans due to his incompetence and reckless indifference on Covid-19.

Cafeteria Conservatives: Outraged when liberals/Democrats do exactly what they excuse in Trump.

Possumlady, Trump knew Maxwell very, very well. Photos of him with her, Epstein, and Melania are all over the internet. And his words were "I wish her well, frankly." Trump certainly knew what Epstein was about, and there are flight records from Epstein's private plane with Donald Trump's name on the list of people who flew with Epstein to his private island. It was referred to as "Pedo Island."

Truth, reason, and integrity flew the conservative coop sometime ago. However, Trump and his cultist have taken dishonesty and corruption to levels not seen before in American politics and government. And they are getting away with it. The government has been seeded with Trump sycophants and ultra conservative jurists that are working to solidify Trumpism and its budding fascism.

It was a warning (in mob-speak). Don't squeal (re what she knows about Dotard's involvement) and things will end "well" for her. i.e. she won't get murdered like Epstein.

Ms Shaw and Rev, Joe biden has been accused of inappropriate touching by several women yet that is fine with you. He has not been found guilty of anything so he must be innocent. If trump said I wish her dead that would have been fine by your standards.
Clinton was found guilty of being stupid and incompetent yet from your perspective she was the bright light.

No I do not hold trump solely responsible for all the covid deaths. There is plenty of blame to go around, cuomo, madam, de bozo and for the leftists to deny this is a china induced virus is . They were all aware o the spread yet denied it by inviting people to celebrate in groups there is nothing to worry about. Big nan tore up the speech mentioning the virus because it was all lies. Now you say it is all trumps fault which is totally false. Politicians are trained to lie and avoid accepting any responsibility and they are very good at it.

Sure glad they removed that horrible Columbus statue in Chicago. Something for the leftists to celebrate.

Careful skudrunner. It is beginning to really sound like you're losing it.