The Trumpublican's CPAC will have the Hungarian dictator, Viktor Orban speak at their gathering in August

Thank you, Viktor Orban, for showing us where the American right is heading.

I don't know about all of my readers here at P.E., but I do know that the men in my family -- my sisters' husbands -- (my husband wasn't born until after WWII) fought the Nazis in WWII. They fought against the idea of "racial purity" and the genocide of people who Hitler thought were not of the "pure" Aryan race. In fact, in my lifetime, I've never met an intelligent American who was FOR the idea of "racial purity" because it does not exist.

Right now, in America, in a country where thousands and thousands of men and women gave their lives fighting Nazism, a group of people, Trumpublicans, are now embracing and promoting a man who echoes what Hitler did in Germany in the 1930s.

Where is their shame? What the hell happened to these people? Where is their patriotism and honor for the men and women who fought and died for an idea that the Trumpublican Party now embraces?

"A gathering of US conservatives in Texas next week will still include Hungarian Prime Minister Viktor Orban as a speaker despite his recent comments which prompted a long-time ally to resign from his government and compare his comments to Nazism.
In a speech over the weekend to supporters in Romania, Orban railed against a “flood” of migrants being “forced” on Hungary. He said he wanted to prevent Hungary from becoming a “mixed-race” country, adding that countries with a high level of racial mixing are no longer countries. Zsuzsanna Hegedus, who is Jewish and his long-time ally and adviser, resigned. The Romanian foreign minister also criticized the remarks."
NOTE:  There is no such thing as a "pure race" in Hungary or any country. 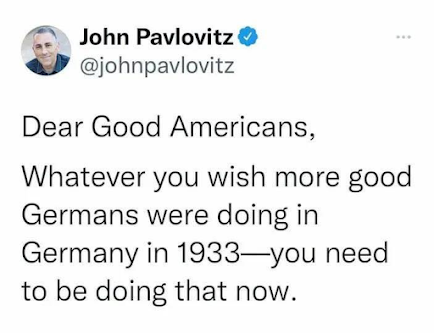 That tells me all I need to know about the direction the Trumpublican Party is going in, and it is shameful and a stain on the memory of those who fought and died fighting "racial purity" in this country and in Europe.

The GOP is fast becoming an enemy of democracy.

But Victor Orban let the cat out of the bag in that speech. Orban and his American devotees are, indeed, fascists. As an American Jew, I am convinced that sooner or later their anti-Semitism will create pain for this country's Jews. First, we will bear witness to their targeting of other minorities. And then they will come for us.

America is not an exceptional nation any longer, if we ever truly were.

We, like so many other nations of the past and present are now succumbing to the lure and evils of authoritarian political ideology, white supremacy, rampant corruption, personality worship, and extreme greed and ignorance.

The Trumpublican party of America now looks and smells a lot like the German Nazi or Italian Fascist parties of Europe in the 20th century. Orban is just another indicator of Trumpublican conservative acceptance of perhaps the worst governing ideology in existence.

Our founders would be spinning in their graves were it possible.

Damn Trump and the Trumpublican party.

They invited Orban because Putin was too busy to attend.

American fascists will prevail if we fail in any of three critical fronts in defending our republic.

Then we can talk about expanding the Supreme Court, enforcing a code of ethics, and impeaching the corrupt perjurers and insurrectionist Justices.

Even after jumping these hurdles, we must never forget the threat of fascism is always lurking in our radicalized Right.

Trump just emboldened them to come out of the woodwork.

Americans need to understand the struggle against fascism will never end, because its racist authoritarian roots run deep in our culture.

We defeated General Lee, but the racism and treason of the Confederacy are still among us.

We defeated Hitler and Mussolini, but Nazis and fascism are still among us.

Trump's "I love the poorly educated", reveals their game plan.

Sadly too few Americans 1) pay attention to realty, 2) pay attention to the consequence(s) of their decisions relative to political action (vote), 3) allow themselves to be led by the nose by their party, 4) love stories (the juicier the better).

You're absolutely correct Dave. Unfortunately too few will listen or care. America is already well on the way to accepting fascism and total state control by the Trumpist and their authoritarian allies across the fruited plains and deep south.