You wanna know what's wrong with America? Here they are in all their violence-loving gory, I mean glory:

This  is Ronny Jackson (Goofball-R-TX) daring President Biden to take away his weapons of massacres, hoping his constituents will think he's a genius because he owns weapons that have caused the loss of life and countless years of misery to thousands of Americans. 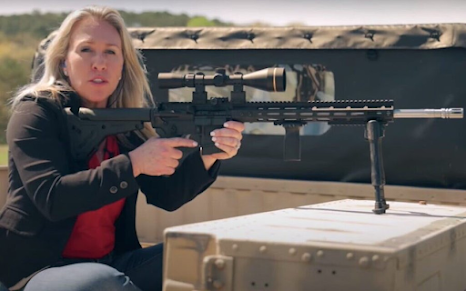 And here we have Lauren Boobert, whose husband was arrested for exposing himself to a minor, and who has a police record herself; who got her GED just before being elected to Congress; and is proud to tell her constituents that she'll bring a weapon to Congress along with her recently acquired GED. Aren't the people in her district Lucky Duckies? 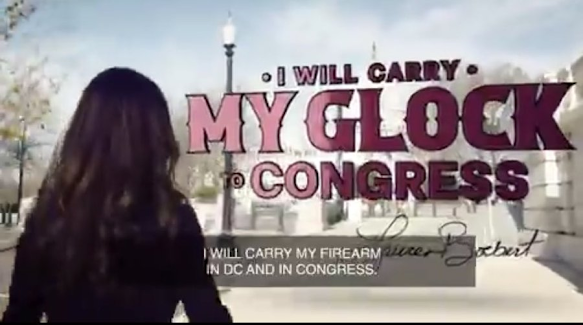 Eric Greitens, running for US Senate from Missouri, was the 56th governor of Missouri from January 2017 until his resignation in June 2018 amid allegations of sexual assault and campaign finance impropriety.  He's proud to tell you, while holding his lethal weapon, that he'll go after all the RINOs (y'know the Republicans who aren't insane) when he's elected. He seems nice. 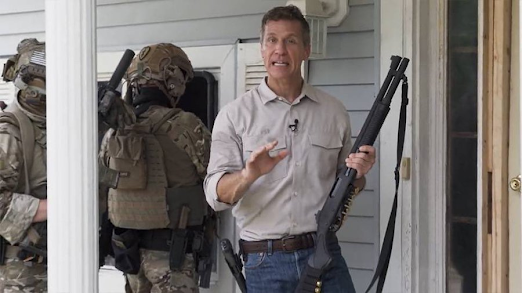 I don't even know who this jerk is, but LOOK! he's holding a weapon, so that must mean he's a Trumpublican running for office who knows nothing about legislating, but everything about shooting things. WooHoo!

And lastly, here's another Trumpublican, Dr. Oz. The MAGA-Republican insurrection fantasies even inspired him to try his hand at the cosplay, promising to use his gun against “an overly intrusive government," which, for those in the back who didn't quite hear that correctly, means he'll commit crimes against the United States government if it doesn't do what HE wants! We have a word for that sort of thing, boys and girls, -- treason. The MAGAts love Dr. Oz! 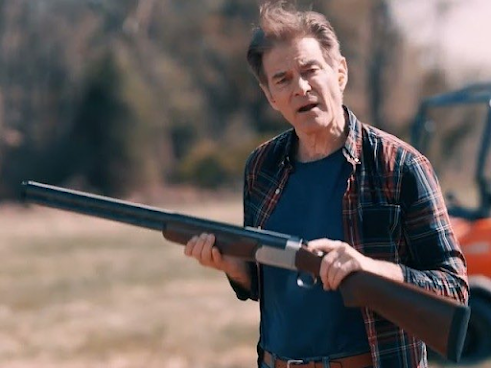 Trumpistas can be proud that they support a culture of destruction and massacre of actual living beings in America.

They can hold their heads high for supporting the moron that instigated an insurrection.

Trumpistas can brag on their efforts trampling civil liberties.

Trumpistas can brag about their explosion of the national debt and their annual budget deficits.

Trumpistas can salute their wink and nod to white supremacists. Especially Trump himself.

It's too bad adults can't continue to veiw the world through the eyes of a child. If they could the beautiful planet we calo home would be a much better place.

My name is Ed Bonderenka. My pronouns are Shall not and Be Infringed.

It’s Day 549 of the coup, the theft of the American Government, by enemies both foreign and domestic.

Our federal government has been stolen by the illegal actions of leftist politicians.

And they are turning our law enforcement agencies on our citizens. This must be stopped.

The above is written by a Trumpist and he sincerely believes this lie. And God help us, because there are millions more like this idiot who believes Trump's lies.

And that is a steaming pile of reified con delusional BS that was expanded on by an orange blob of human excrement known as DJT.

Enjoy your echo chamber over on the Mothership of Delusion anon.

Unfortunately, Eric Greitens is in the lead right now for republican candidate for Senator. And there are two more crazies right behind him in the polls.

Trump said yesterday that he wanted a quick trial and execution for drug dealers, and that each one executed would save 500 lives.

In his last week in office, Trump pardoned 13 people convicted of selling or trafficking drugs.

PS Hope you're okay, re: flooding.

We've got one major party that is okay with giving a racist autocrat an audience in service of "we want to hear him" and "everyone is entitled to their opinions."

Hungarian President Viktor Orban, speaking of a multiracial and multicultural Europe and his country Hungary stated “we are willing to mix with one another, but we do not want to become peoples of mixed race.”

Why would a major political party in the United States give a coveted speaking engagement to a man who openly espouses racist views? One of his top advisors even resigned in disgust, stating his comments represented “a pure Nazi speech worthy of Goebbels.”

Sure, in the abstract, everyone is entitled to his or her own opinion. But we don't have to showcase such racist tripe. And in so doing, give tripe a bad name!

All opinions are not of equal value. And this is one of them.

The GOP, and their supporters should be ashamed for this. But they are not. And that begs a question...

So what do you want to do with these people? They are Americans. They vote in numbers to elect Trump president and get majority in Congress. It is good against evil and good does not always win. This will not end, even if we put Trump in jail, in fact, that might make them more violent.

Violence, ignorance, greed, and delusions are their nature. Along with white supremacy, misogyny, and dishonesty. That is the reality of Trumpistas and their party and leader.

Rev, So the answer is to not allow people with differing opinions to share their views. The "if you don't agree with me you have no voice" has never been a great idea but that is what you are saying. At one time there were witch trials against people who had a different view, do you believe they were OK.

Skud, you actually think giving an openly racist person like Orban a chance to give his “opinion” on racial purity, and why he advocates for it for Hungary and for other White Christian countries is a good thing? You know who else favored racial purity and advocated for it?

I imagine that were you around in his day, you’d have supported his right to his opinion on this racial purity hogwash. Do you remember what happened to the people who didn’t pass his “racial purity” test? Hint: Hitler murdered all 6 million plus of them. You can look it up on GOOGLE. Seriously. We fought a war because of that monster and his “opinion “ on racial purity and his other insane ideas.

Not all ideas are equal and deserve equal treatment. Racial purity is one of those insane and stupid “opinions” that got millions and millions of men, women, and children killed, and that’s why it needs to be thrown on the ash heap of history and NOT recycled ever again.

Apparently you and the Trumpublican Party disagree.

So is this a support for free speech as long as it agrees with me time. Either you support FREE speech or you don't there is no middle ground. Do you feel threatened by hearing different opinions or are you afraid you might agree with something that is said and that would be devastating. You shouldn't have to agree with someone to hear them out. This seems to be a problem we have in our society, if you don't agree than don't try to discuss your differences. This is the number one obstacle in race relations, everyone is to afraid of being labeled to discuss opinions. If you are white and you disagree with something a black person said, well you must be a racist.

Skud is actually defining his own ethics and morality quite thoroughly Shaw. At least everyone knows.

Anon, You are correct. I believe everyone should be heard and make their own decisions about their lives. You feel different and want to stay in your bubble so you do not have to hear other positions on issues. Even though I want to hear and consider all opinions I understand there are millions of people who are satisfied to hide behind a wall.

A wall skud? Hmm. So glad you recognize the wall you and your partners in white privilege hide behind and have since the founding.

skud: "So is this a support for free speech as long as it agrees with me time. Either you support FREE speech or you don't there is no middle ground.""

skud, you're smart enough to know that there is no such thing as "total free speech."

You cannot yell "FIRE!" in a crowded theater, for example. You can't threaten people's lives -- especially the POTUS and VPOTUS and others, and people are free to slander other people, but they are also open to being sued. People are also not "free" to make false claims about products, foods, medicine. There are lots of things one is prohibited from saying, so "free speech" isn't "total free speech."

But this post is about Orban and his invitation to speak to the GQP CPAC and for the GQP giving him a platform to spout his "racial purity" hogwash, which, it appears, you believe people should listen to because those ideas may have merit? Do I have that right?


As I said above, that "idea" was put forth by Adolf Hitler, and that idea deserves to be thrown on the ash heap of history.

While you spend your time here challenging my opposition to Orban and his proven stupid idea of "racial purity," the governor of Florida is stopping free speech left and right and I hear nothing from you about that.

"CRT," "woke gender ideology" are other "ideas" that Conservative DeSantis doesn't want anyone in Florida to hear. He's making laws against allowing anyone to hear those ideas.

Where do you stand on that? Hmmmmm?

Let Orban speak at the GQP CPAC, and let America see the direction the current Trumpublican Party is headed in.

I think it stinks.

Ms. Shaw, According to you there are now three major parties because republicans and trumpicans are two separate parties. I will agree with Joe Manchin in that people are tired of politics but it does control our lives. Maybe the Forward party will give the voter a viable choice in a political party that works for the American people because it is clear the democrats or the republicans don't. Democrats are all about buying votes by giving money away and the republicans has no answers to anything.

Oh gosh, the merry-go-round of non-stop BS from the cons continues.

And skud loves the process of self delusions.

The nation's political divide is so goddamned broad this nation is unlikely to ever again be united in any meaningful way.

Not that the gun slinging, insurrectionists of the Trumpublican party want any unity whatsoever. Unless it is EXACTLY what THEY and THEIR BELIEFS and SELF INTERESTS dictate. For them it's to hell with any and everything they find distasteful.

There is no both sides are the same. It's bullshit that makes those like skud feel justfied for their allegiance to a dying destructive ideology.