This is what's left of a once proud political party: Idiot candidates who think they show themselves to be powerful candidates by posing with a lethal weapon, a kind of weapon that's been responsible for countless massacres of men, women, and children over the years. And the idiot woman below is proud to let you know she's a big supporter of this lethal weapon that mercilessly kills Americans. 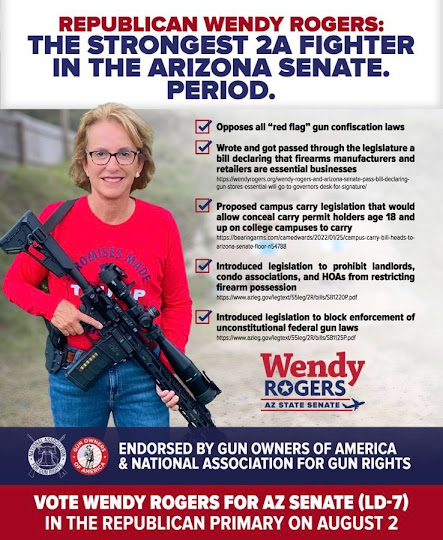 "Running for office as a Republican is easy. To win the GOP primary,  all you have to do is be photographed with a bigger, more ridiculous assault rifle than your opponents." --Roshan Rinaldi on Twitter
If you think this is normal and American as apple pie and Mom, then you're part of the problem and what's made America a dystopian landscape.
Below is another a**hole, the governor of Texas, proudly holding up a lethal weapon similar to ones that were responsible for more than one massacre of the innocents in Texas, and just recently for the slaughter and deaths of little children and two teachers in his state.
What sort of immoral monster poses with a lethal weapon like this and glorifies it as mothers and fathers bury their massacred children? 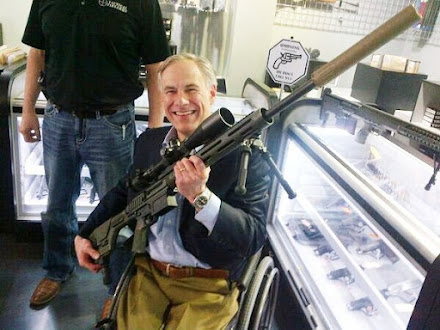 Governor Abbott skipped every single Uvalde funeral.
But look! He loves his lethal weapons!
This is what the Republican party has become.
They have no platform.
They have nothing to offer to further our country's progress.
It's just "GUNS" and "JESUS", and punishing girls and women.
Posted by Shaw Kenawe at 6:00 AM

I'm pretty sure the time will come when the morons of America (the cons, religionists, and republicans) will wish to Christ they had used their heads when supporting the authoritarians they have fallen in love with recently. And when they do MAY THEIR PAIN AND SUFFERING BE AS GREAT as the pain and suffering they have and are continuing to willingly inflict on innocent others.

These people are AUTHORTITARIANS. They are NOT real Americans. Were Hitler or Mussolini alive today they would be cheering them on. Blowing them kisses all the while.