Trump deserves to be tossed in prison for what he did! 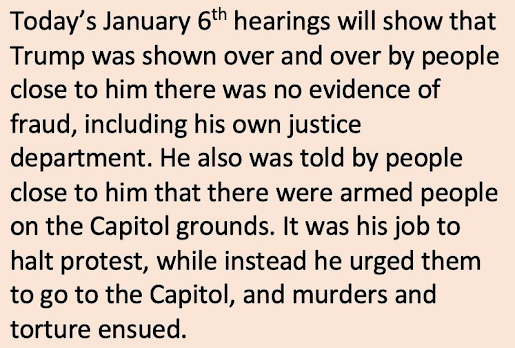 “Trump attempted to make the Jan. 6, 2021, march on the Capitol appear spontaneous even as he and his team intentionally assembled and galvanized a violence-prone mob to disrupt certification of his electoral defeat.”  --NYTimes
Donald Trump was at the insurrection’s center.
As shocking to me as the mounting evidence that a sitting president incited an insurrection -- in essence, to wage war against his own country -- are the waves of commenters who think we ought to just forget about this. Trump is out of office, gasoline is expensive, let's move on. This proclivity for political amnesia is sadly common but still appalling.
The events surrounding January 6 are the worst thing to happen to the United States in my lifetime. Imagine if we declined to investigate the JFK assassination, or Watergate, or the Challenger disaster because it's tedious work, and we've got other problems. "Turn the page!" is the worst possible advice.
We've learned that Trump mentioned keeping the insurrection plans secret from relevant government agencies, specifically the National Park Service, that prevented the deployment of personnel to protect the Capitol. This is just another example of his intent to have his mob successfully overcome the understaffed Capitol police and disrupt the peaceful transfer of power.
We must move forward and make Trump legally accountable. Those of us who have been paying attention from day one have already known of his 100% guilt. Finish the job and get him to court with the many charges we know are against him. He is the one who invited his paramilitary mobs  to act on his violent wishes. He should not be allowed to put himself forward as any candidate for ANYTHING, ever!
Nothing about the former president was ever real, from his staged descent on the Trump Tower escalator into the cheering crowd, who turned out to be paid actors, to the attempt to make the Jan. 6, march on the Capitol appear spontaneous. Trump's notion of wanting the march to seem "spontaneous" is a tell on what makes him tick.  He's not a politician or a businessman; he's an actor. And actors always wants their performances to seem spontaneous in order to appear "real."
As the witness Jason Van Tatenhove, former spokesman for The Oath Keepers, stated "let's not mince words."
What was outlined yesterday was an act of sedition, incited by the former POTUS, Donald J. Trump, to stop the certification of electoral votes:  An attempted coup perpetrated on the United States of America for the first time in our history.
Throw his seditious rump in prison!
Posted by Shaw Kenawe at 12:05 PM


Barb McQuade
@BarbMcQuade
· 1h
For next Jan 6 hearing, which will cover Trump’s 3 hours of inaction as the mob stormed the Capitol, resulting in 5 deaths, I will be thinking about a crime I have not yet heard discussed much: manslaughter.

The Jan. 6 Committee is probing the former chief of staff’s finances, Rolling Stone has learned, adding to a long list of legal headaches

Trump’s inner circle increasingly views Meadows as a likely fall guy for the former president’s attempts to overturn the 2020 election, so much so that members of Trump’s legal team are actively planning planning certain strategies around Meadows’ downfall — and Trump has himself begun the process of distancing himself from some of his onetime senior aide’s alleged pre- and post-Jan.6 actions. Indeed, several of Trump’s legal and political advisers have already spoken to the ex-president, on a number of occasions in recent months, about how much “trouble” Meadows is likely in.

Meadows’ already bleak legal prospects could get even worse. Rolling Stone has learned that the Jan. 6 committee has been quietly probing his financial dealings, and any new revelations would add to an already long list of unethical and potential illegal actions he’s accused of taking on behalf of Donald Trump.

“Everyone is strategizing around the likelihood that Mark is in a lot of trouble,” says a lawyer close to the former president. “Everyone who knows what they’re doing, anyway.”

This reporting is based on Rolling Stone’s conversations with eight sources familiar with the matter, each of whom is still working in Trump’s political orbit, on his legal defense, or in Republican circles in regular contact with the ex-president. The sources spoke on the condition of anonymity to candidly discuss sensitive matters. A spokesperson for Meadows declined to comment.

It may seem shocking to imagine that a sitting president incited an insurrection. To imagine that a rather dim-witted con man and narcissist with an ego the size of the planet Jupiter did so is rather less shocking. The fact that he happened to be president at the time was just a product of a series of bizarre black-swan events in 2016. It was quite in character for him.

Nevertheless, successful prosecution of a former president for such crimes will be quite difficult and require a lot of attention to detail. It is encouraging, not worrisome, that Garland is taking his time and making sure he gets everything right. Trump may well end up in prison. That's the nearest thing to justice that our current culture is likely able to deliver in this case.

Doesn't the Federal Government still have the death penalty? If anyone deserves it, it's the orange buffoon.

Trump, as guilty as he is, will likely not serve a day behind bars. Perhaps he shouldn't. Shame him in every way possible and mark him guilty of the crimes he comitted. Then let history do the rest.

I'd love to see his ass in jail, but that won't happen.

Now comes news that the US Secret Service deleted text messages for Jan 5-6 after they were ordered to preserve those messages by the US Inspector General in case the Jan 6 Select Committee would need them.

Don't hold your breath waiting for all the extremists who are sure the Clintons are killers, that Hunter Biden is fleecing the government and Benghazi, Benghazi, Banghazi to demand any answers or see it as anything more than a simple mistake.