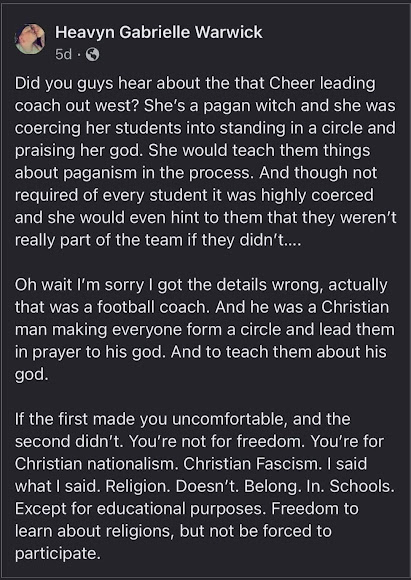 And this abandoning religion is working so well for us. Violence is out of control as is crime in general. Religion gives us a moral compass to conduct our lives by. Even if you do not believe in God everyone needs to have something to believe in and something to guide their lives. If you believe in religion and want to share your beliefs you are castigated. Since we have declined from believing in anything we have become a more violent society. The left blames the NRA and the right blames the left but the overall blame is the decline in any belief system including ourselves. Buddhist, Catholic, Baptist, agnostic and pagan all have beliefs in something.

The descent into forced mysticism of Christian making is now in full blown open mode.

I once read a book called the Beloved Country years ago. As I remember it it was about South Africa during the years of apartheid. I wonder who will write a similar book about the Great American Experiment in Self Rule and the Rule of Law when in all dies to make room for a FORCED christian theocracy.

skud: "Religion gives us a moral compass to conduct our lives by."

If that were true, and it isn't, there would never have been the torture and murder of Americans with dark skin. That was murder, and the Southern Christians had no problem in participating in it. Nor the genocide of our Native People. Nor the genocide of Jews in very religious, Catholic, Germany.

Ms. Shaw, There are people from all walks who have no moral compass and that includes people who claim to be religious. A large portion of people are CINO which is kinda like Rino but christian. Don't forget that back in the dark ages the pope managed wars and nuns were for pleasure. The democrat party was for the worker not the rich and we voted for a president instead of against one, look how great the anyone but trump has worked out for us.

Religion, and its practice as been a great purveyor of unhappiness, violence, and death throughout recorded history skud.

Religion, including Christianity has a very checked and sordid past skud. It ain't about to change now. Why? Because people are people. Only they can f'up spiritually.

There have been Ethical Societies and Humanist associations since the late 1870s. There motto is: "Deed not Creed". They exist to honor and live in accordance with ethical principles and that is central to what it takes to live meaningful and fulfilling lives, and to creating a world that is good for all. They focus on supporting one another in becoming better people, and on doing good in the world.

Some of the most "moral" and compassionate people I know are either agnostic or atheists.

Then you have folks like my sister and brother in law. Staunch Catholics. In fact, my brother in law goes to church EVERY DAY!! Yet when I was talking to them a few years ago, they asked if I was still in touch with my "funny" friend. I had no idea who they were talking about. I finally figured out they were talking about a gay friend of mine. Another year instead of gifts for the holidays I asked that everyone donate in my name and gave a list of organizations near and dear to me. Instead, they gave money in my name to Catholic charities. Now I know Catholic charities do good work but they were just trying to stick it to me since I no longer follow the Catholic religion. I mean, who does that? How petty and mean spirited especially during Christmas, yet I'm sure they think they are incredibly moral.

"Buddhist, Catholic, Baptist, agnostic and pagan all have beliefs in something." Skidmark

So, in your bizarre little world, Skid, Every school day would begin with some manifestation of ones religious beliefs. You couldn't possibly exclude any religion without going against the Constitution so each day would need to last about 22 hours in order to make time for each religion and non-religion to have equal time. Personally, I'd spend all my time starting new religions and asking for each of them, but that's just the whims of a sick old man.
You wrongly associate morality with religion - there is no connection at all, thanks. As Ms. Shaw has brilliantly pointed out, our history is replete with examples of religion being a mask for evil. Sorry, your argument fails, badly.

You gotta love radical Right religious Trumpists. Salt of the Earth and light of the world.
Have you noticed how self-righteous Trumpists have no sense of humor?
I'm kidding, of course. They love to laugh... at the misfortunes of people they hate.

But they are truly the enlightened ones...who know a zygote is a person.
What would Righteous Trumpists do if they went to a restaurant and ordered a chicken dinner... and were served a poached fertilized egg?
Enjoy a nice poached "chicken" dinner, or have egg on their face?

But they know what's really happening. Just ask them who won the 2020 presidential election.

Thank you. I'll be here all week.

I don't know why I, or anyone, has to repeat this, but I'll do it one more time:

If that were true, very religious people in Muslim countries would not have flown airplanes into buildings and killed 3,000 Americans, the Taliban wouldn't throw acid in young girls' faces to stop them from going to school. In places like Saudi Arabia, they would not stone women to death for being raped and "shaming" their families. These inhuman acts were and are carried out by very religious people.

Women were hanged and put to death as witches by religious people here in the New World. The Inquisition murdered countless human beings, and it was run by clergy who believed they were doing God's will on Earth.

The Conquistadors who came to the New World committed genocide on the Native Peoples in the name of their Christian God. Germany was a strongly Catholic country that looked the other way as Hitler slaughtered Jews and other humans he believed were unclean and sullied the Aryan race.

Missionaries who believed they were doing God's work, traveled to Pacific islands and destroyed their gods, their way of life, and beliefs and brought pestilence and death to those the Pacific Islanders.

Right now, in America, a religious belief of when life begins almost cost the life of a 10-year old child who would have been forced to carry a pregnancy by rape to term (In Ohio, there is no exception, contrary to what right-wing media are reporting.)

HERE ARE THE FACTS TO BACK THAT UP.

I suspect Christ, seeing how Right-wing "Christians" have bastardized the religion bearig his name, has found a different path. I also suspect the Trumpist "Christians" aren't welcome.

Make a recording. Loop it. Put it in your sidebar. Always available.

Those with blinders, willfully placed by themselves, will remain blind to truth and reality Shaw... period.

Not "doesn't not." Arrrrgh!

I've always been suspicious of people who overtly proclaim how religious/godly they are.

IIRC, (lapsed Catholic, here) the N.T. tells the story of how a Pharisee prayed publicly to impress others of his "godliness." As we've witnessed in our own lifetimes, those who like to be public about how religious and God-fearing they are, are usually just the opposite.

And who was it who said how amazing it is that God hates and condemns the same people that certain religionists hate and condemn. What a coincidence!

Yes. All of that is correct. The far-right religionists on the SCOTUS have unleashed the whirlwind with their ruling on R v. W.

And we're witnessing the results.


PS. You're welcome here all week!

Sadly, instead of religion being a force for Good, in the hands of human beings, it's often been a force of Evil, where humans are all too eager to punish people who do not share their beliefs or who do not hold a belief at all.

I will repeat Steven Weinberg's, Nobel Laureate in Physics, observation on religion:

History bears that out.

A corollary to Weinburg’s observation:

For good people to do evil things, that takes being duped by evil authoritarian leaders.

"If you believe in religion and want to share your beliefs you are castigated."

You mean like imposing your religious beliefs about abortion? The Jewish religion does not prohibit abortion even for reasons like the woman cannot afford or psychologically deal with another pregnancy. And yet the Christofascists in this country have eliminated that option for religions that allow it!

That is exactly not just sharing your beliefs but IMPOSING them on other religious people.

We are not all Christians in this country. And yet Christian beliefs are being forced on us!

The coach's prayer sessions were optional. An important difference you forgot to mention, in fact, you intentionally infer they would be mandatory.

Shaw - I've been quiet because of death threats received on another website. If you choose not to post my comment I'll completely understand. That said, the comment by Anonymous at 3:38 pm just drives me nuts.

There is a term used in the military - voluntold. It is used when someone in a position of authority over others announces an event is voluntary with the quiet part being the vilification of those who don't participate. It means any person who doesn't participate in the event, in the case of the coach with their prayer group in the center of the field, risking valuable field time. It means being benched if agents are in the crowd. It means... well, I hope I've defined the situation clearly.

I really truly believed the Supremes would find in favor of the school. I felt poleaxed when they didn't. Finding out behind the scene details like the Christian Nationalist lawyer group representing the coach meeting with the Supremes for prayer sessions before the determination was released makes me realize theocratic coup attempt is happening now. We don't have another election. It's now or we lose democracy.

Vote Blue no matter who this election. Next election cycle we can work on getting younger folks into office but right now we have to back the candidates we have. It's called Radical Acceptance in Mental Health circles. You look at reality as it is and make the best decision with the situation and players you have, not the ones you want.

I will not live in a theocracy, although the purity tests (ala Emo Phillips' greatest joke) will be fun to watch. I wonder who will be yeeted off the bridge first?


For those who've missed this jewel: The Greatest Joke by Emo Phillips

Thing is, I don't want to murder anyone, nor do I want to burgle anyone. So - how am I able to be a good person without a Priest class standing over me to ensure I behave?

It's call honor, character, and discipline.