A Confederacy of Denial by Tom Tomorrow 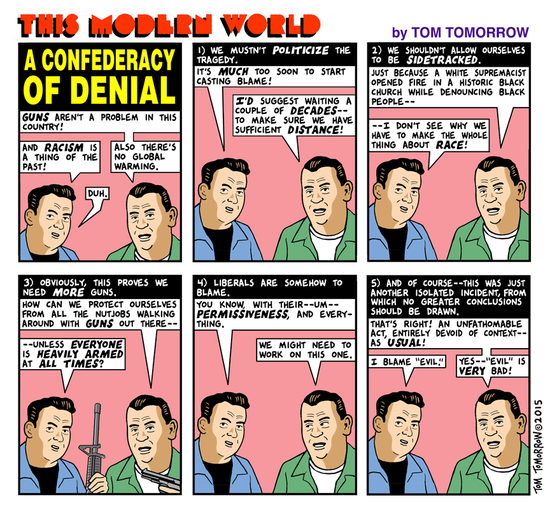 Sums it up nicely.


Some knee-jerk conservative on a blog called the president a liar for saying we have more of these gun murders more frequently than any other advanced country.


Obama is right: gun violence is much worse in the US than other advanced countries

What accounts for these fallacies of mystification, erroneous attributions, and milksop sound bites? A brutal crime demands from us nothing less than brutal honesty. Instead, our presidential candidates sacrificed candor for political expedience. Read between the lines: They don’t want to antagonize their base of Southern white voters, the NRA vote, or the neo-Confederate vote comprised of bigots and reactionary extremists.

Mass murder should never serve as an advertisement for the NRA nor serve as a platform for sleazy politicians. The circus of pandering, vapid sound bites, and depraved indifference is frankly appalling.

Indeed, the Confederate flag represents exactly who we are … a nation of moral cowards, hypocrites, racists, renegades, enablers, and shameless snake oil salesmen.

Post-racial America? No. In fact extreme right wing white supremacist groups are more dangerous than jihadists and have committed more murders on the American people than have Muslim jihadists. When Napolitano warned us of the rise of these dangerous groups, the conservative pundits, pols, and bloggers lost their minds. But she was absolutely correct.

"The FBI lists nearly 6,000 hate crime incidents in 2013, its latest statistics. Only a fraction of these make the national news, like the Chapel Hill murders. But the big picture, as CNN’s national security reporter, Peter Bergen, reported last April on the anniversary of the Boston Marathon bombing, is that “since 9/11, extremists affiliated with a variety of far-right wing ideologies, including white supremacists, anti-abortion extremists, and anti-government militants, have killed more people in the United States than have extremists motivated by al Qaeda’s ideology.

There’s no question the jihadist threat is a tremendous one,” SPLC wrote. “But that is not the only terrorist threat facing Americans today. A large number of independent studies have agreed that since the 9/11 mass murder, more people have been killed in America by non-Islamic domestic terrorists than jihadists.”

SPLC found that “almost half of the attacks during the period apparently were motivated by the ideology of the antigovernment ‘Patriot’ movement, including ‘sovereign citizens,’ whose movement has been described by the FBI as ‘domestic terrorist.’” The other half were from people with “ideologies of hate, ranging from white supremacy to misogyny to radical Islamism.”

Most assailants were not young like the Boston Marathon bombers, but “were clustered most heavily between 30 and 49 years of age, although a surprising number were older than that,” it said. “This suggests that perpetrators spend many years on the radical right, absorbing extremist ideology, before finally acting out violently.”

The bolded text in the above comment is from Alternet.

Indeed, the Confederate flag represents exactly who we are … a nation of moral cowards, hypocrites, racists, renegades, enablers, and shameless snake oil salesmen.


The above is what moral cowards who defend that POS flag/rag refuse to see.

Shaw... regarding the new banner and gun control...

It might help conservatives understand if we gave them context as to why Ronald Reagan was a supporter of gun control when he was governor of California.

People were coming to assemblies and rallies with loaded guns, not to kill, but for protection. So he signed a law that repealed the right to bear and openly carry loaded firearms in California. It was introduced into the legislature by a Republican member of the assembly.

It should be noted that this limiting of 2nd Amendment Rights, introduced by the GOP, and signed by the conservative governor, was felt necessary because African American people had decided they too had a right to keep and bear arms.

"You know the great thing about the state of Iowa is, I'm pretty sure you all define gun control the same way we do in Texas -- hitting what you aim at," Cruz said at a town hall meeting Friday in Red Oak."

Two days after the Charleston massacre. What a disgusting pos.

Just read this. What do you think?

"Of course, burning the Confederate flag would be disrespectful. That is exactly the point.

There is no need to respect a symbol that is as evil and vicious to African Americans as the Nazi swastika flag is to Jews. In fact, it is important to actively disrespect the banner that represents a pure form of human evil.

The display of the Confederate flag — anywhere — is a nonverbal statement of race hate. Its burning would be a nonverbal response to its crude attitude. You're sure not going to change their attitudes with sweet reason. Fight their figurative fire with the real thing.

People who still believe in the values of the "Lost Cause" need to be educated about how normal people feel about their insurrection. We are happy that Abraham Lincoln and the Union army smashed a society based on cruel exploitation, rape and sadism."

Ooops. h/t Infidel753 for the above link. Also I endorse what he proposes.

NEWS FLASH! Senator Lindsey Graham will call for the removal of the Confederate flag from the state house grounds. It appears Gov. Haley will do so as well.

And to the morons who cling to that symbol of racism, understand that people of good will no longer will accept your excuses for flying that rag. Take it down, put it in a museum.

Now the question is why Graham and Haley would favor removal.

We can hope that they sense a backlash in South Carolina.
I don't know what else would compel them.

Graham previously said the flag "is part of who we are,"

And you are so right Sen Graham. The flag first went up on the SC state house on April 11, 1961 in opposition to the civil rights movement and to re-affirm white supremacy.

That's who you are? You own that.

Yes, removing the flag from the statehouse and putting it in a museum boils down to official acknowledgement that the symbol of enslavement of blacks in America in offensive and has no place in society. Yet there will continue to be racism and it may get uglier before it gets better. Evil often dies a hard death.

Radical Redneck, Rusty ChuckleNutz, and others @ the Stench Trench; aka Smut Hut as well others like them will continue to perpetuate racism, hate, anti reason, and anti American values.

The last panel sounds exactly like what a commenter on RN's blog said. Although, instead of an "isolated incident", this person called it a "inflammatory episode" that we should "not give so much credence to". Clearly this person is one of those who believe "no greater conclusions should be drawn". In fact, the individual in question said people who do draw any greater conclusions are "sanctimonious... slantheads".