So. Carolina Governor Nikki Haley: "It's time to move the flag from the Capitol grounds."

To loud cheers and whoops.

She did the right thing. 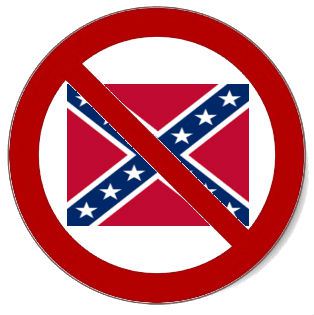 ... but she's only talking about moving the flag not removing it.

The pressure needs to stay on.

Is RR over at the Smut Hut on suicide watch?

Soon the only place we'll see that symbol of white supremacy is on asses.

Warning: photos in above link may cause eye bleeding. Proceed with caution.

Guess neo rebs will just have go into home production of confederate artifacts.

You can dry up the products but ya can't suffocate the sentiments. Unfortunately.

Who knows, RR, that red assed primate over at the Stench Trench just might go into business.

In a moment of idle curiosity, I visited a certain blog this morning and found this comment:

Will “the shrill shill” Hart: “being that a black person is many multiples [sic] more likely per capita to kill a white person than vice versa I'm note [sic] entirely certain that it's a one way thing.”

It took my breath away and left me speechless. In essence, what he is saying: The Charleston church massacre was not a hate crime but a revenge crime and therefore “explainable” – even implying “justifiable” -- within the context of crime statistics. A bogus theory at best, an immoral one at worst.

How does one “explain” or rationalize the loss of NINE INNOCENT LIVES! No, I am not putting words in his mouth! This is the subtext of a post that was further embellished in his comment.

Nine innocent lives, all decent and honest citizens who committed NO CRIME: A pastor, a librarian, a teacher, a speech therapist, and other citizens of faith who lost their lives that day. Not gang members, not street thugs, nor drug abusers, nor petty thieves – this is the very essence of RACIAL PROFILING and RACISM callously tucked inside the depraved indifference of statistics.

A more thoughtful and ethical person might consider the adverse impact of historical and systemic racism against an entire population – centuries of slavery, Klan terrorism, lynching, murder, Black Codes, Jim Crow laws, inequality and injustice. An honest person might consider how persecution and privation leads to despair, how despair leads to desperation, and how desperation leads to crime. But Will Hart with no heart and no soul is not an honest person or an ethical one. To be blunt, I will call him what he really is: A RACIST.

"On the Concept of Extrapolating from One Heinous and Racist Action the Conclusion that America Continues to Be a Racist Country."

His pompous assedness is surpassed only by his obsessive boosterism of his imagined intelligence.

It's a waste of time and effort to reason with unreasonable people whose minds cannot understand the difference between street crime and racially motivated attacks:

Here are the FBI stats from 2014, the latest I could find:

Of the reported 3,407 single-bias hate crime offenses that were racially motivated, 66.4 were motivated by anti-black or African-American bias, and 21.4 percent stemmed from anti-white bias.

60.6 percent of the reported 1,402 hate crime offenses based on sexual orientation were classified as anti-gay (male) bias.

Law enforcement agencies identified 5,814 known offenders in the 5,928 bias-motivated incidents. Of these offenders, 52.4 percent were white and 24.3 percent were black or African-American.

BTW, (O)CT(O)PUS, it's amusing to read how you, RN, this blog's hostess, and others rankle, nettle, vex, enrage, annoy, inflame, and drive to distraction the many people who populate the extreme TeaPublican blogs. They are positively obsessed with what we have to say, and they faithfully visit this blog and other liberals blogs to not only drink in their daily dose of bile, but to copy and paste my commenters text and pass them off as their own, while at the same time accusing me of sending my sock puppets to their depraved blogs.

They're barefaced liars who accuse others of the very subterfuge and skulduggery they themselves engage in every day.

Dishonesty isn't enough to describe this: I find it to be a sick mentality that runs deeply and darkly through their very obvious unhappy, damaged, and brutish lives.

Rarely will I level a charge like this, and I certainly prefer not to. What prompted me this time: This is not the first time he [meaning Will Hart] injected crime statistics into a discussion on race. And yes, beyond any reasonable doubt, the out-of-context abuse of statistics rises to the level of racial profiling. Guilt by association, guilt by innuendo … dishonest to the core! The non sequitur does not even fit the crime ... or the discussion.

This is the kind of crap that sent burning flesh up chimneys and left bodies hanging from Magnolia trees. It is bigotry, pure and simple!

Ducky: The pressure needs to stay on.

Ann Adamsapple,
Passive resistance and civil disobedience did not win the war against Nazism, and pious words will not win against racism. Bigots must be treated as bigots ... and condemned, full stop.

So the South Carolina state legislature has agreed to debate the removal of the flag.

It might be a rather grand spectacle at that. I can see little, if any, political cost to espouse the confederate point-of-view as a state legislator. At this point, it's anybody's guess as to which way it will go. Maybe big-tent republican Lindsey Graham can put in a personal appearance.

It clearly would be Governor Haley who fears the political cost of simply ordering the State Police to enter the grounds and, in fact, remove the flag. So far, she is still in safe territory.

Bigotry's having a tough week. Good for IBM. Bobby Jindal has the mistaken idea that all Americans agree with his bigotry.

And good for the southern leaders who want take the Confederate flag off of government property.

Yes, these things do move slowly on he political stage Flying Junior.

Then there is Mike Huckabee who wants less conversation about race and more conversions.

Think I'll watch an episode of Deadwood. A change of pace is often needed. Good for one's sanity you know.

Did just the ribbon cutting get cancelled or is IBM cancelling the jobs and moving them elsewhere?

Thanks... That's exactly what I suspected. Symbolic only.

You can read strange and confused things on the intertubez these days. That's for sure. Someone complained that the gay rainbow flag is still flying while presumably whining that the Confederate flag is coming down. Yeah. There's a comparison for you. The Confederate flag was designed by a man who specifically said it stood for white supremacy, and the KKK proudly displayed it when they terrorized African Americans, burned crosses, tortured, and murdered them. The gay rainbow flag? It's symbolism is inclusion and recognizing that the LGBT community deserves the same rights as all citizens under our Constitution.

So the misguided dimwit complaining about the gay rainbow flag still flying needs to think about how grossly stupid that comparison is. It show how completely and utterly clueless most of the radical WATBs are on this subject.

Yeah, you just have to love the cluelessnes of WATB's everywhere. Irrespective of the source. Of course everyone knows where the greatest population of WATB's reside. Except the WATB.

In 1915, THINK signs, employing the slogan embraced by the president of IBM, Thomas Watson Sr., were first displayed about the company. (Why is it that I am typing on an IBM Think Pad?) It was not too many decades later that some company wits modified the signs to say, "Think or Thwim." (Source, Bennett Cerf.)

It would be my professional estimation, that governor Bobby Jindal, is currently thinking.

That certain blog Octopus visited has a lot in common with Roof and his insane idea of putting black on white crime in the same category as racial hate crimes:

"One of the most chilling revelations about Dylann Roof, the alleged murderer of nine parishioners in Charleston, South Carolina’s Emanuel AME Church, is that his descent into crazed and deadly racism began with a simple Google search. According to a manifesto he posted online sometime before his rampage, Roof had his “awakening” after seeing news reports about the death of Trayvon Martin. Roof describes hearing and seeing Martin’s name everywhere, looking him up on Wikipedia, and “being unable to understand what the big deal was.” After that he typed “black on White crime” into Google and came upon the website of a far-right group called the Council of Conservative Citizens. After that day, Roof wrote in his manifesto, he was never the same."

HMMMMMM...... maybe we should get a US flag that does not represent a history of genocide,bigotry, violence,agression, capitalism, class repression,....but whatta I know?
maybe a white flag? doan know....the only part of the 'stars and bars' that I like is the bars....wit good beer.

I’ve been thinking this post from RN since yesterday.

There have been many words, but nothing quite hits mark.

We need to focus on the victims. We should be kinder, gentler to the people who have lost so much. It’s the only ethical and moral thing to do.


Who made it that way? The designer of the flag who said this about it: "As a people we are fighting to maintain the Heaven-ordained supremacy of the white man over the inferior or colored race."

When the designer of the flag explicitly says it represents white supremacy and when the KKK marches with it, it is a blatant symbol or racism. People who refuse to see it in all its ugliness maintain that racism.

A bunch of people on the far right blogs are losing their minds over the Confederate flag being pulled from stores and internet sites that sell them. Those are private businesses making business decisions. What's their problem with that. It's voluntary. No one is forcing these businesses to do it. It's smart business move.

Taking the flag down from government property also makes sense. The conservative religious people object to their tax money going to support causes they disagree with all the time and demand that they be exempt from having to participate in say, the coverage of contraceptives for women, if their tax money is involved?

I don't think statues of Confederate soldiers and buildings and schools named for Conferate soldiers will be affected. Although it is strange to this Yankee to see folks celebrate a bunch of military people who lost a war and fought against the United States of America so that a few southern families could enslave millions of people. Why would anyone want to celebrate that?

The people losing their minds over this and predicting the end of America as we know it are foolish, over-reacting, and reactionary crybabies. Grow up and leave that shameful part of history where it belongs: On a dust heap.