Ted's Excellent Bromance With The Donald

Ted "I never miss an opportunity to make myself look foolish" Cruz fell all over himself praising The Donald for speaking the truth about those Messicans -- y'know being criminals and rapists and all that. (To be fair, The Donald did say he loves Messicans after he maligned the entire country and everyone living in it. That made his slander HO-kay.  Plus he didn't  mean just Mexico, he included all  Latin Americans who come over our borders.  And China!  So there's that.)  And isn't Donald's brazen audacity of dopiness exactly the quality certain people on the right (Hello New Hampshire Republicans!)  think is what we Americans want in the person who will represent us -- all of us-- on the world's stage. Donald tells it like it is:   He's cocky, he's bold in his relentless vilification of cultural groups, his hair is stylish, if dead animals on one's skull is your thing; he's been married three times and in bankruptcy four.  What a treasure trove for the TeaPublicans!  Lucky duckies!


Cruz:  "I like Donald Trump. I think he’s terrific, I think he’s brash, I think he speaks the truth,  And I think NBC is engaging in political correctness that is silly and that is wrong.  He has a way of speaking that gets attention. And I credit him for focusing on an issue that needs to be focused on.”


Donald's way of speaking certainly does get attention, but in this case it's not the sort of attention that a candidate for the presidency wants that will put him in "the zone."


Trump seemed to be touched by Cruz’s defense, taking time of calling people “haters” and “losers” on Twitter to thank the senator. It was almost as if just a few months ago, Trump wasn’t trying to drum up support for the idea that Cruz himself is an ineligible alien.

“He’s got a hurdle that nobody else seems to have at this moment. It’s a hurdle and somebody could certainly look at it very seriously. He was born in Canada,” Trump said in an interview with myfoxny.com, adding that “you’re supposed to be born in this country.”

So that's the news for today.

Ted Cruz and Donald Trump:  A weasel defending a jackass. 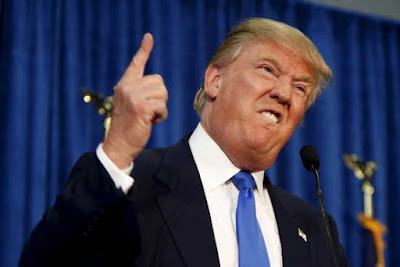 It is getting tiring to say the very least. Boring as well. Either we have a few dumbass politicians (in every party with a majority in one particular one) or we have a nation full of dumbasses for putting up with it all. I'm not entirely sure which it is but I'm beginning to lean to the latter.

And in that statement, Ted Cruz illustrates the disconnect between Mexico and Cuba. Sadly for the GOP, a Cuban on the ticket, be it Cruz or Marco Rubio, will not necessarily benefit the ticket.

The GOP candidates (except for John Bush, I think) are afraid of doing the decent thing and condemning Trump for his slander of Mexicans and Latin America. If they're silent about what he said, they approve of and agree with it. They are so fearful of offending their small base, that they have no problem with offending everyone in Central and South America and their compatriots here in the U.S.A. Profiles in cowardice.

Ann, Ted is a political hack. There's no other explanation for his pandering to Trump. He and Trump will never be president.

You can tell a lot about people from those whom they admire. Considering Cruz's recklessness during his debt-ceiling gambit, and his arrogance in putting the world economy at risk for relatively minor political gain, he's more similar in character to Trump than one might think.

Excellent photo of Teh Donald. It should become the official internet portrait.

After considering your argument Infidel753 I find myself in agreement. Only question is whether Trump or Cruz would be the most dangerous as prez. We very likely will never know for certain as neither have a snowball in hell chance of winning the office. Hypothetically, when it comes to individual liberties and civil rights, i'd say Ted (the Crud) Cruz.

On the other hand, it was refreshing to hear all of the other candidates come out so forcefully against Trump's comments in which he referred to Mexicans as "rapists", especially after the recent spree of hate crimes we've seen over the last few weeks. Did I say "was refeshing"? Sorry, I meant "would have been refreshing".