Here's some Stupid for Friday

The civilized world laughs at us: 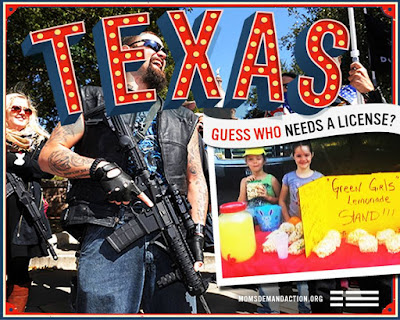 Two young sisters with an "entrepreneurial spirit" set up a lemonade stand in Overton, Texas, to raise money for their dad's Father's day gift, their mom said. But Andria and Zoey Green's business closed abruptly Monday after police came by to tell them their stand was illegal without a city Peddler's Permit, according to Overton Police Department Chief Clyde Carter. "It's illegal to sell lemonade without a permit," Carter told ABC News today.

"But we didn't tell them to shut down, we just asked them to get a permit."

The girls' mother, Sandi Evans, said they went to try to get a Peddler's Permit at City Hall, but found out they'd have to get licensed by the Rusk County Health Department before being allowed a Peddler's Permit.

The Rusk County Health Department did not immediately respond to ABC News' request for additional information including specific details about the process for getting a permit to sell lemonade.

"Once we found out everything we would have to go through, we just decided to stop technically selling the lemonade," Evans told ABC News today. "The girls are still going to have the stand, but they're just going to ask for donations instead."

Walking around with a loaded long gun?  No permit necessary.

Time for another bumper sticker- "Guns don't kill people-lemonaid does" ?

I don't know. Look at that photo closely and it looks like lemonade isn't all they're selling.
They're selling illicit popcorn also.

Texas is generally rather lax about regulation. Not only with guns -- recall the town of West, TX, which was partly flattened two years ago when an unsafe ammonium nitrate factory exploded. Apparently they choose to accept some hazards as the necessary price of being so business-friendly -- but non-permit lemonade is just too risky.

The girls should have incorporated and promised to donate their first million in lemonade profits to Republican politicians' campaigns. Then they could have done anything they wanted.

Hell with secession, can't we just kick Texas out of the Union?

The young girls were peddling lemonade and
technically were doing so outside of
town statutes.

Must have uniform enforcement in application of the law. No matter how foolish.

‘MORALLY BANKRUPT with a callous disregard for people’ is the only way to describe the mentality of Texas these days:

Texas Cops Issue Arrest Warrant to 75-Year-Old Woman Because the Grass on Her Property Is Too Long.

Apparently Texas law enforcement is concentrating on the length of grasses on people's property and children's lemonade stands. Hey! You gotta obey the law, except when judges rule that states must allow equality of marriage, then the TeaPublicans have a moral obligation to disobey that law.

Cafeteria Conservatives: OBEY ONLY THE LAWS WE AGREE WITH!


We are a silly country.

I'm not gonna defend a sheriff who makes a bad decision like this one.

But there is another side to this and others like it that have demanded "letter of the law" enforcement.

Because of fear of being sued for not applying the law equally, across the board, government has been forced to apply it against behaviors that would, in the past, have been overlooked.

If the city let these kids sell their lemonade without a permit, how about the guy on the street that opened a barbecue stand in his front yard. If it is illegal for him, as it would be, why not them?

Lawsuits, many of them brought solely for the purpose of extracting money, are one of the main reasons we have one size fits all law enforcement.

And the lawyers that bring those lawsuits, are generally a group of folks from the Dem side of the ledger.

The Law is the Law...except as it applies to me.

Humanity Shaw is silly in and of itself.

But some have sky and sea gods to guide them; by the words of their human scribes who have special understanding and authority to interpret the wisdom from above and beneath.

Then we have the wind and fire gods. With such a menu to choose from it gets just oh so confusing. :-)

Dave, do you know of a case of food poisoning from a lemonade stand?

The law is clearly meant to protect people from unsanitary food trucks and the like and
should be able to discriminate between a health issue and a lemonade stand.

"From slapping parents with $500 fines for letting their kids run unlicensed lemonade stands (though this was later waived after public outcry), to government officials calling the cops on kids selling cupcakes, the list goes on and on and on.

Nor does it stop with kids. Food Trucks are also under the gun of regulators and city governments across the country. This isn’t to say that food trucks don’t need any regulations at all, but many of the regulations that come down the pipeline are pushed by brick-and-mortar competitors who want to keep competition at a minimum.

But it’s the shutdown of lemonade stands that I find so inexplicable. Who stands to lose from a couple of six-year-olds selling lemonade? Who stands to gain from shutting them down? Do local governments really think parents are going to pay for $400 vendor permits, or that kids can scrape together the money for food permits? Are there any actual safety risks? Kids have been selling lemonade for decades without permits of any sort. They often set the stands up just for fun, but many lemonade stands (or bake sales) are used to raise money for schools, cancer, or sick pets. Lemonade stands represent the most innocent, optimistic side of capitalism out there."

Personal note: A 10-year old boy was selling lemonade here in Boston's North End today. Several people came by and bought a small cup for 50 cents, which was poured from a supermarket half-gallon container.

I don't know what the lemonade stand regs are here in Boston, but no one seemed bothered by this child selling lemonade. And no one called the cops on him.

Ducky... not a one... just as I don't know anyone who has died from taking one aspirin, yet kids get suspended on zero tolerance drug policies all the time.

But that's not the issue. Either the law must apply in all instances, or in no instances. And that is our problem. Because many, conservatives and liberals alike, did not like the law to interpret, we ended up with a one size fits all approach.

Which, as we can see, limits kids selling lemonade, or local fruit, as I did when I was kid, selling plums from my family tree.

We can decry the idiocy of it, but we have helped bring about this reality.

Related is this... conservatives have for years have decried the heavy handedness of government regulations. They have called for essentially the common sense of the citizenry. However liberals, really, folks like us, have been loath to trust that approach, choosing instead, a stronger central governmental authority.

The problem is both approaches work, until they don't.