Do you feel a little embarrassed when you watch Donald Trump?
By Elspeth Reeve


A little ashamed? I do. And I think that’s why so many critics, mostly haters and losers, argue that Donald Trump should be ignored, that he is a fake presidential candidate who cares about nothing but his own vanity, that there are fringe candidates with better credentials who can add more to our political discourse. That’s probably all true, but Trump still deserves to be showered with the attention he craves. Because Donald Trump is an artist. And his masterpiece is the way he brilliantly skewers the American political system and exposes just how easy it is to make your way through a presidential campaign on bullshit alone. 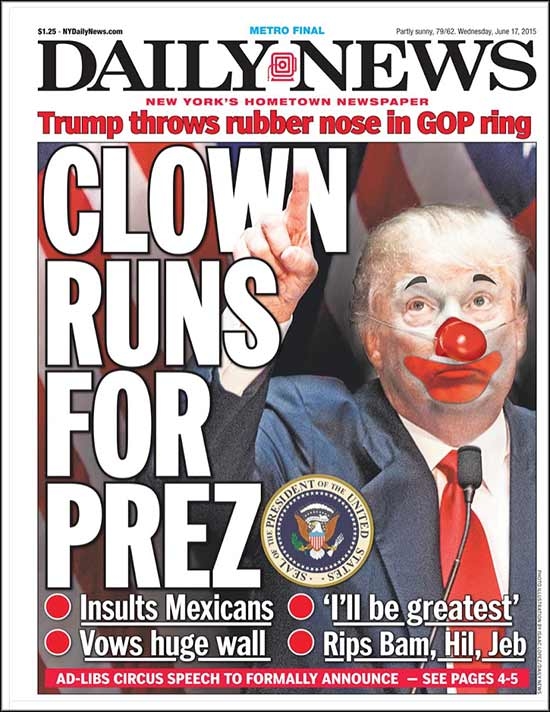 Great piece by Dana Milbank of the WaPo:

The Hollywood Reporter confirmed my story and obtained documentation to that effect.

Twitter widely mocked the meandering speech. Some conservatives heralded Trump’s announcement with great fanfare, others received the news with skepticism and derision. Pundits, prognosticators and journalists were mixed. In one analysis, Halperin noted Trump’s ability to draw crowds as an asset.

Trumps "ability to draw crowds" as long as he pays them to show up?  LOL!  What a dupe Halperin is.  Trump is as phony as the dead animal he wears on his head that passes as a toupee!  We LOVE THE DONALD!  He has turned the GOP field of candidates into comedy gold!  And here I thought John Bush! would be the funniest candidate!
Posted by Shaw Kenawe at 8:17 AM

I'm in Mexico now. People here are already mocking him. He's going to build a wall and have Mexico do it? Mexico is sending their rapists across the border? He's going to call the pres of Ford and add a tariff to every car built here in Mexico?

He's given folks here the best laugh they've had in quite a while.

I just hope he gets in at least a couple of debates.

He is entertaining and adds spice to an already boring presidential lineup. Up till Trump entering the race, Sanders was the most alive and fun to listen to. Neither has a chance but they are entertaining to watch. The difference is H is the democratic candidate and the republican has yet to be ordained.

That would be a awful big wall and since Mexico's politicians are more corrupt than ours, good luck getting them to pay for anything.

It's not just our neighbors south of the border who are laughing, people all over the planet are as well. Bobby Jindal's self- proclaimed "Stupid Party" -- his words -- has given the wold another reason to concur with his perfect assessment of the modern GOP.

BTW, I'm sure many commenters on the far-out, extremist right wing blogs will assert that Donald "That's Not A Red Fox On My Head" Trump is Boo-Yah choice for the GOP!

I'm glad he's declared his candidacy; we all need something to laugh at these days.

Comparing Sen. Bernie Sanders with Donald Trump is fatuous, but I don't expect anything but that from skudrunner.

Out of Donald's purdy mouth:

T “When did we beat Japan at anything?” Trump asked.


He’s right; I can’t really think of anything except for that World War II thingy.


This is the guy that certain TeaPublicans think is brilliant. Couldn't even get that smarter than a 5th grader fact right.

Trump is dangerous. We may all die laughing at the asshat.

This just in: The Donald got the brawling, drunken, half-term, half-wit Palin endorsement!

That'll convince "yoooooooooge" numbers of voters to vote for him!

Sistah Sarah could see The Donald's dead red fox toupee from her porch!

Trump fits right in with the rest of the republican loons.

A) Trump is hilariously funny.
B) Trump is not a serious candidate and the world knows it.
C) Trump is ill informed.
D) Trump knows he can't win.
E) Trump will find a way to make money off his run for prez, his real goal.
F) Trump is a megalomaniac.

Shaw is right; America needs a good belly laugh once in awhile.

I never compared Sanders to Trump, I just said they both provide provide something fun to listen to.
Why is it that Sanders didn't run as an independent candidate. Must not be serious about his chances.

The Donald opened his presidential campaign by stealing a Neil Young song, and Neil, although a Canadian citizen, is a Bernie Sanders supporter.

With all his billion$$$$, The Donald had to steal a song? Couldn't he have hired a band to write an original Clown Song for him?

He stole instead. Nice work Donnie.

Jerry, that would be a YOOOOOOOOGE loon! Everything The Donald does is YOOOOOOOOGE!

Trump shoulda used this for his kick-off campaign song.

Actually skudrunner Hillary may be fun to listen to as well. I'm looking forward to her "here's how we're going to pay for it" explanation.

Be a damn shame if we continue on the path to cliff's edge GWB started us on.Especially since Obama has been successful at cutting the deficit.

Heard him briefly on The Majority Report yesterday going on about building a 2000 mile border fence and having Mexico pay for it.
The Teabags were lapping it up.

Yes sir, a man who has spent his entire life learning how to manipulate the bankruptcy court is
just the candidate to guide us to another massive recession.

The good news is that he's polling in the top 10 and will be eligible for the Faux Snooze debates.
He's the best bet to make them really divisive.

Looks like he's going to bump L'il Ricky Santorum so it's kind of a wash but Ben Carson and Huckleberry can handle the fundamentalist position.

Time for the major question of the day, Can Christie fit in the car?
Have the Republicans thought this out or is it just free for all?

Donald Trump's big presidential announcement Tuesday was made a little bigger with help from paid actors — at $50 a pop.

"We are looking to cast people for the event to wear t-shirts and carry signs and help cheer him in support of his announcement," reads the June 12 email, obtained by The Hollywood Reporter. "We understand this is not a traditional 'background job,' but we believe acting comes in all forms and this is inclusive of that school of thought."

What a phony! A Yoooooooge phony!

Can't Christie fit in the car? Well he proved he could fit in that baseball uniform, dint he? LOL!

Thank goodness for spandex.
But it doesn't look to me as if he can get down on a ground ball without difficulty.

Shaw, that baseball uniform should earn him a place in the "What Not to Wear" Hall of Shame...

As my friends in Mexico say about someone looking that... He looks like a piñata... stuffed with sweets and ready to burst!"

Maybe that's how Trump hopes to win the nomination and the election? Pay people to vote for him?

Seriously, Trump could serve a genuine purpose during this campaign by highlighting the underlying extremism of the Republicans. He's going to make a lot of extremist, offensive statements -- Mexican rapists and "build a wall" are just the beginning. Other idiocies about blacks, gays, Obama's birth certificate, etc. are sure to follow. Whenever this happens, journalists who are on the ball can ask others like Jeb and Rubio if they agree. In a sane party they could easily just brush off Trump's comments as the ravings of a fringe candidate, but this isn't a sane party. The candidates will hem and haw and dodge, knowing that all too many of their primary voters, whom they have to pander to, agree with Trump. And that takes care of the YouTube ads for the general election.

The Republicans put themselves in this position by allowing cranks and bigots to become the base of their party -- the kind of base where a Trump can get traction because he's saying what so many of them really believe. They shouldn't be allowed to deceive the public by hiding this.

Donald Trump is the grift that keeps giving, and vice versa.

I'm really sick and tired of Trumps detractors saying he's an entertainer, an actor and a clown. In short minimizing his abilities, talent and qualities as a leader.  I insist readers remember Ronald Reagan was an actor. Rush Limbaugh is and entertainer, and ever member in congress, and our political leaders are "CLOWNS."