but still important to remember: 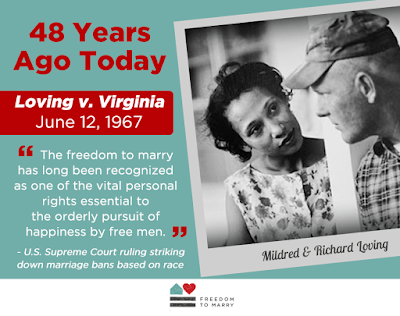 Supreme Court Justice Clarence Thomas and his wife Ginny would have been arrested for marrying each other if they did so before the SCOTUS ruled on this. It'll be interesting to see if Thomas denies gay Americans what the SCOTUS allowed him and his wife to do. Marry the person they love.

In 1869, when the Georgia Supreme Court ruled that:

"...moral or social equality between the different races...does not in fact exist, and never can. The God of nature made it otherwise, and no human law can produce it, and no human tribunal can enforce it. There are gradations and classes throughout the universe. From the tallest archangel in Heaven, down to the meanest reptile on earth, moral and social inequalities exist, and must continue to exist throughout all eternity." 5

As far as intermarriage is concerned, the "eternity" hoped for by the court in Georgia came to a crashing halt everywhere in the U.S. 98 years later. In 1967 the U.S. Supreme Court declared the remaining anti-miscegenation laws in 16 states to be unconstitutional. All U.S. couples -- whether of the same or different races -- were eligible to marry in any state, as long as they consisted of one woman and one man. The Court reached this conclusion even though the vast majority (72%) of American adults were opposed to legalizing interracial marriage at the time. Also a near majority (48%) favored criminal punishments for interracial couples who married .

The Court reached this conclusion even though the vast majority (72%) of American adults were opposed to legalizing interracial marriage at the time. Also a near majority (48%) favored criminal punishments for interracial couples who married.

So sayeth the words of the chosen man.

How long were African Americans supposed to wait before their children were allowed to attend public schools supported by their tax dollars? Before they were allowed to sit in any seat they chose on a bus? A train? Eat at the same lunch counter other citizens sat at? Register to vote without having to answer rigged questions from corrupt town and city voter registration officials. How long?

Infidel is right. Without federal intervention, would the Jim Crow south have voluntarily changed its discriminatory ways?. I think we all know the answer.

The basic right to marry the person you love should not be restricted by someone else's religious dogma. If a religious person is against gay marriage, then don't attend one don't participate in one. Simple. But extreme religious groups have no right to deny equal protection under the law, even as they tried to for interracial marriages. And failed. Same old tactic of using the Bible to deny people their rights. Extreme religionists have been doing it forever. And they will continue to fail.

Here's what's been published on some racist right wing blogs.

"The only ones who want us to think nothing has changed for Blacks and is the same as it was 50 years ago are The NAACP, The Black Congressional Caucus, Jesse Jackson, Al Sharpton, Hussein and Moochelle Obama, and the White Liberals with their phony "White Guilt" and the rest of the race baiters and race card pullers.

Hell! Even names! I see no problem with being proud of your heritage, but giving your kid a name that marks him before he even gets an interview?
What's wrong with typical American names? I guess there in lies my biggest problem. Blacks want to be African-Americans. Why not just Americans?

This is disgustingly racist. Yet many of the people on those blogs nod their empty heads in agreement. And the Republican Party wonder why 98% of African Americans do not vote for them?

The whine about African American names is particularly nasty. Does the idiot who authored this screed have that opinion about the name CONDOLEEEZZA (her parents made up that name)? How about the name COLEEN? That's an Irish name. Antonin? An Italian name and the name of a Supreme Court Justice.

The idiot who wrote those rants? FULL OF BULL.

Saw that rant at the originating blog. Sounds to me the poor soul is simply defining the bitterness that some caucasion folks feel because they feel life dealt them a bad hand and is leaving them behind.

I questioned the author of the rant asking him what set him apart from those he was demeaning and degrading. Of course the answer would be nothing but quite likely the point was lost on him.

Skippy's Mom, It's the old GOP attitude: I've got mine; screw you.

Infidel753, I think Robert D. had a good answer to your questions on how long Americans should wait to receive their Constitutional rights. Thank you both.

RN, which "chosen man" are you referring to?

Free Twinkies, the right to marry the person you love IS a civil right. The right to marry is conferred by the state. And I agree, if that goes against one's religion, then don't attend a gay marriage. Churches, mosques, and temples will not be forced by the government to marry gay people. That's a fear tactic being spread by the extremists. Some churches and temples do marry gay people, but by choice, not force. So even in some religions, there is a difference of opinion on this subject.

Anonymous Reader of TP blogs, sorry you choose to wade through the muck and mire of those blogs. It's only mildly interesting, since the people who agree with the rants by these bigots are a minority and the majority of Americans don't agree with them.

The person [or persons] who wrote that swill is obviously illiterate and ignorant of history. But that doesn't stop his/her admirers from praising the bigotry does it. It's all tribal and exactly the sort of rhetoric (here comes Godwin's Law) the Nazis employed against the Jews: Marginalize, dehumanize, demonize, and lie, lie, lie about them.

Fortunately reasonable people see that garbage for what it is. It's all those sad, pathetic bigots have to hang onto. Let them spread that merda around on their own blogs. I prefer you don't bring it here again. But thanks for the alert.

Whoever wrote it [or stole it from some other blog] is obviously stupid. That sort of crap appeals to the visitors of those blogs. They seem to feed off of their victimhood.

My daughter (white) married a black man two weeks ago. It was one of the best days of my life, right after her birth and her survival of cancer. They are two of the hardest working people I know; not just at work, but their work ethic on their relationship and how they care for others.

Each of us has the responsibility to pass along the ethic; young and old, black, white, brown.

Congratulations on the marriage of your daughter to a wonderful man. Blessings on them, you and your family.