It is so ordered.


"This analysis compels the conclusion that same-sexcouples may exercise the right to marry. ...the right to marry is a fundamental right inherent in the liberty of the person, and under the Due Process and Equal Protection Clauses of the Fourteenth Amendment couples of the same-sex may not be deprived of that right and that liberty.

An individual can invoke a right to constitutional protection when he or she is harmed, even if the broader public disagrees and even if the legislature refuses to act. The idea of the Constitution “was to withdraw certain subjects from the vicissitudes of political controversy, to place them beyond the reach of majorities and officials and to establish them as legal principles to be applied by the courts.” West Virginia Bd. of Ed. v. Barnette, 319 U. S. 624, 638 (1943). This is why “fundamental rights may not be submitted to a vote; they depend on the outcome of no elections.”

No union is more profound than marriage, for it embodies the highest ideals of love, fidelity, devotion, sacrifice, and family. In forming a marital union, two people become something greater than once they were. As some of the petitioners in these cases demonstrate, marriage embodies a love that may endure even past death. It would misunderstand these men and women to say they disrespect the idea of marriage. Their plea is that they do respect it, respect it so deeply that they seek to find its fulfillment for themselves. Their hope is not to be condemned to live in loneliness, excluded from one of civilization’s oldest institutions. They ask for equal dignity in the eyes of the law. The Constitution grants them that right.

The judgment of the Court of Appeals for the Sixth Circuit is reversed. It is so ordered." 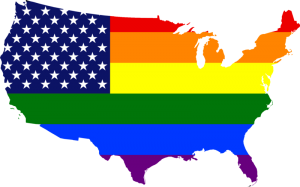 Rep. Louie Gohmert, R-Texas, reacted with guns blazing, calling the ruling a “civilization-changing decision that destroys our nation’s heritage of Biblical marriage. May God forgive our Supreme Court majority for its arrogance and its self-apotheosis.”

Invoking biblical history, he warned, “Both Moses and Jesus stated that it was God’s law that ‘a man will leave his father and mother and a woman will leave her home and the two will come together as one.’ That defined marriage … The Supreme Court ruling is heartbreaking for the turmoil it will mean for our nation’s future.”

Gohmert indicated two justices should have recused themselves, observing, “It is clear beyond any doubt that Justices Kagan and Ginsberg have held exceedingly strong opinions that same-sex marriages were constitutional by virtue of their having performed them.”

He further warned, “[I]f Moses, Jesus, and contributors to the Bible were correct, God’s hand of protection will be withdrawn as future actions from external and internal forces will soon make clear. I will do all I can to prevent such harm, but I am gravely fearful that the stage has now been set.” - Right Wing Watch

So God will no longer protect the US because marriage equality is the law? Seems like a petulant reaction from God, doesn't it? Gohmert said nothing about what a righteous god would do to a country where people sitting in church studying his book get gunned down by a white supremacist. Or another church where little girls died in a bombing? Or a region of the country that allowed the lynching of American citizens because of the color of their skins? Where was the wrath of god then?

THose crimes seem a bit more serious than allowing two people who love each other to marry.

But don't expect rationality from people like Gohmert. They're driven by hate, ignorance and political theater.

And they're always welcome into the ever-shrinking GOP tent.

Watching the radical extremists falling all over themselves to explain how granting equal rights to all citizens is unAmerican. They're looking at this decision through a religious lens, not a civil rights lens. So they got it wrong. As usual.

Until the RWNJ pickets Red Lobster their bleating about what is or isn't endorsed by their idea of deity is bullying, pure and simple. Of course they don't see it that way but that would be due to the log firmly lodged in their eye.

I am content to be a citizen of the USA today. I thought we'd lost our way. Turns out we just took the long way to justice.

WC, you got that right.

Connie, it's is a long road to justice, but justice is there at the end of the journey.


“The arc of the moral universe is long, but it bends towards justice.” --MLK

I guess all republicans will be getting divorced since gay marriage destroys traditional marriage. Gay marriage is a divorce attorney' wet dream.

OK, let’s argue the case of gay rights from a “religious perspective.” To borrow a page from George Orwell, some religious beliefs are considered more equal than others. To underscore the hypocrisy that is taking place, consider the following:

“Rev. Augustus Sealy, 54, was placing flags in front of the Hartford First Church of the Nazarene to honor veterans for Memorial Day … According to a police incident report, a car slowed down as it approached Pastor Sealy, at which point a witness reported hearing five gunshots. “Some language used in the incident — and given where it was, in front of a church known to be accepting of our LGBT community — led us to have concern that this is a hate crime,” Deputy Police Chief Brian Foley said in an interview.”

In Alabama, a Minister was arrested for attempting to perform a same-sex marriage – just minutes after the gay couple received a marriage license. Originally ordered to post bond of $1,000 and serve 30 days in prison, the minister received a reduced sentence of six months unsupervised probation plus a $250 fine.

Neither, according to the 1st Amendment of the Constitution, whose purpose is to impose a wall of separation between church and state. Yet, GOP politicians have little regard for constitutional law and the legal traditions of our country:

Bobby Jingo: “Marriage between a man and a woman was established by God, and no earthly court can alter that.”

Jeb Bush: “I believe the Supreme Court should have allowed the states to make this decision.”

If equality were subject to a popularity contest, or left up to states, we’d still have slavery. Government has a legal and moral obligation to ensure equality under law for all citizens, not merely the rabid and angry base. Kennedy’s decision was absolutely right and the only one possible.

I could never trust any of the above candidates to protect my rights and freedoms. IMO, they are ALL a bunch of hypocrites, moral cowards, and opportunistic hacks. Dangerous too, considering how they define freedom and liberty.

"Government has a legal and moral obligation to ensure equality under law for all citizens, not merely the rabid and angry base."

But, unfortunately, the TGOP candidates are pandering to the goofballs in their base. You and I know that sane conservatives do NOT agree with the base's extremist ideas about same-sex marriage. The Libertarians and Conservatives I know have no problem with the SCOTUS's recent ruling.


A friend sent this to me in an email today. He read it on a fringe, far right blog:

So the same people who write imbecilic things like that are the same people vowing not to follow the SCOTUS's ruling on marriage equality. Whoever wrote that has no concept about laws or civil rights. The equal protection clause of the Constitution guarantees that all American citizens are treated the same under state and federal law. The moron who wrote the above, likening consenting adults who enter into a mutually agreed upon legal marriage would be the same as extending civil rights to criminals who molest and rape children and to criminals who commit beastiality. Obviously, that person is among the many hopelessly uneducated and malicious souls whose twisted minds will never allow them to see their own stupidity.

Yet, those are the very people the current GOP candidates hope to appeal to in the coming debates and primaries.

"Louisiana Gov, Bobby Jindal (R) on Friday suggested doing away with the Supreme Court during a speech in Iowa that followed the court's historic ruling on same-sex marriage.

"The Supreme Court is completely out of control, making laws on their own, and has become a public opinion poll instead of a judicial body," he told the crowd, as quoted by The Advocate newspaper. "If we want to save some money lets just get rid of the court."

Remember when the right went berserk over a taken-out-of-context quote by President Obama about fundamentally transforming America?

Here's one of the right's heroes talking about getting rid of one of the three branches of government established by the Constitution, and Piyush thinks it's cute, but probably not fundamentally transforming.

When Citizens United won a favorable ruling by the SCOTUS and the Voting Rights Act was gutted by the same court, I didn't hear any of the hysterical right wingers vowing to disobey the ruling and wanting to do away with the court.

Here's how it works. The crybabies on the right love the court when it rules in their favor; when it rules against what they want, they vow to become lawless or, even better, do away with the judicial branch established by the Founding Fathers.

Read these unhinged comments from, well you know.

Actually, it is. It's just that the pain, unfortunately, is experienced by those witnessing the stupidity rather than by those perpetrating it.

"If we want to save some money lets just get rid of the court."

And Huckabee thinks states can just ignore Supreme Court decisions, at least if his imaginary friend disapproves of them. Funny how these ding-dongs are running for President but don't seem to have even the most basic Civics 1A grasp of how the government works.

Skippy's Mom: Actually those "choruses of rainbow-colored demon-monkeys singing hymns to the Dark Lord" sound kind of cool. I bet they could sell out the Tacoma Dome if they toured the northwest. But I'm kind of baffled by the STATES OF EVIL DEVIL WARSHIPERS." Satanists have their own navy now?

Well, the Texas governor has already put a hold on issuing licenses to gays.
These jokers are really going to hard nose the highway and the results could be ugly.

He's pumping out the standard litany of "unelected legislators" and "religious liberty".

Mississippi is also refusing (surprise, surprise).
I imagine as this plays out it will give Huckleberry a big boost with the religious right and
may force some others to be even more extreme.

Had an interesting discussion with an 82 year old gentleman. He has problem with gays having all the legal rights of hitched heterosexual couples who. He likes Huckabee.

Guess I needed that 3'rd cup of coffee.

Should read he has no problem with gays having all the legal rights.. where the who came from at sentence end is a puzzle.

Ducky: The spirit of Wallace in the schoolhouse door is alive and well down there.

All they are doing is guaranteeing that their descendants will be ashamed of them.

RN: Well, it figures Huckabee's support must be coming from somebody. If that man is 82, he must have been born around 1933 and come of age around 1953. The world he knew as a young man was so different from today's that it might as well have been another planet. Some people don't adapt well to change.