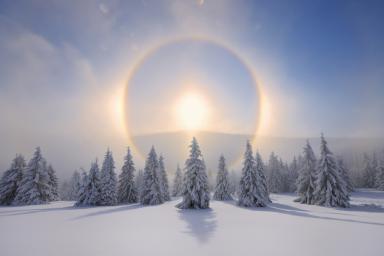 The winter solstice is again upon the Northern Hemisphere, and though the year's shortest day heralds the onset of winter it also promises the gradual return of the sun after a prolonged period of darkness. That there are holidays at the time of this astronomical event is no coincidence.

Since ancient times, people have celebrated the solstice and observed it with many different cultural and religious traditions. Some of them survive to the present day—though not always in the form you might expect. The term solstice means "sun stands still."

On the year's two solstices (winter and summer) the sun appears to halt in its incremental journey across the sky and change little in position during this time. Of course, contrary to appearances from Earth, the sun's "changing position" throughout the year is actually caused by the rotation of the Earth on its tilted axis as it circles the sun each year.

Many more people observe the solstice while participating in modern holidays—even if they do not always realize the connection.

"As the Christmas celebration moved west," Yeide said "the date that had traditionally been used to celebrate the winter solstice became sort of available for conversion to the observance of Christmas. In the Western church, the December date became the date for Christmas."

Traditional solstice celebrations existed in many cultures. The Roman feast of Saturnalia, honoring the God Saturn, was a weeklong December feast that included the observance of the winter solstice. Romans also celebrated the lengthening of days following the solstice by paying homage to Mithra—an ancient Persian god of light. Christian leaders of the time endeavored to attract pagans to their faith by adding Christian meaning to these existing festivals.

"This gave rise to an interesting play on words," said Yeide. "In several languages, not just in English, people have traditionally compared the rebirth of the sun with the birth of the son of God."

While religious observance of the winter solstice is not as common as it once was, many in the Northern Hemisphere will surely give thanks for the slow but steady return of the sun.
Posted by Shaw Kenawe at 9:17 AM

You know... for me tomorrow is a good day. Because starting tomorrow, we turn to light...

I hope your holidays are peaceful Shaw.

Love all you can, each and every day!

Thank you for your kind words, Dave. Merry Christmas and a healthy happy new year to you.

I'm not in a politically correct mood today. ;-)