JUST SO YOU KNOW

Clarification of Trump's inaccurate Tweets or his pathological lying: 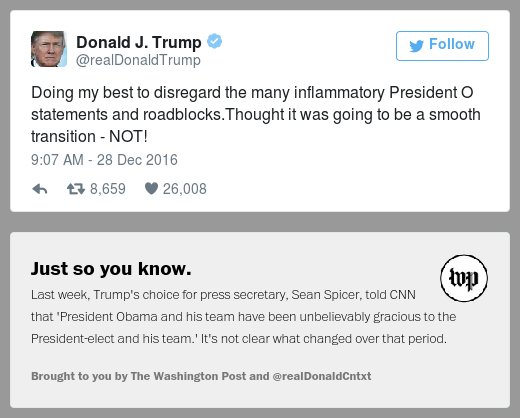 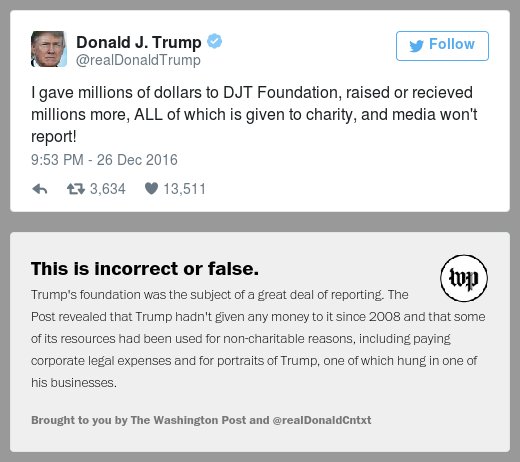 P.E. will continue to report on Trump's avalanche of inaccuracies and lies and inane pronouncements on subjects he knows nothing about.

We've had a busy day of Trump news. I know you all want to be on top of things, so here's the latest. First, Trump was asked what he thought about Sen. Lindsey Graham's statement that sanctions were due against Russia and Vladimir Putin for their hacking during the election. Check out his reply:

"I think that computers have complicated lives very greatly. The whole age of computer has made it where nobody knows exactly what is going on. We have speed, we have a lot of other things, but I’m not sure we have the kind the security we need. But I have not spoken with the senators and I will certainly will be over a period of time." --Donald J. Trump, Pussy-grabber-Elect and Idiot.


Here are his embarrassingly stupid remarks on an extremely serious issue during his mini-press conference. It's apparent that Trump knows NOTHING about the Israeli settlements or America's policy for the past 70 years. The country has elected a functioning illiterate as its president. His naked stupidity is a tragedy for us all: 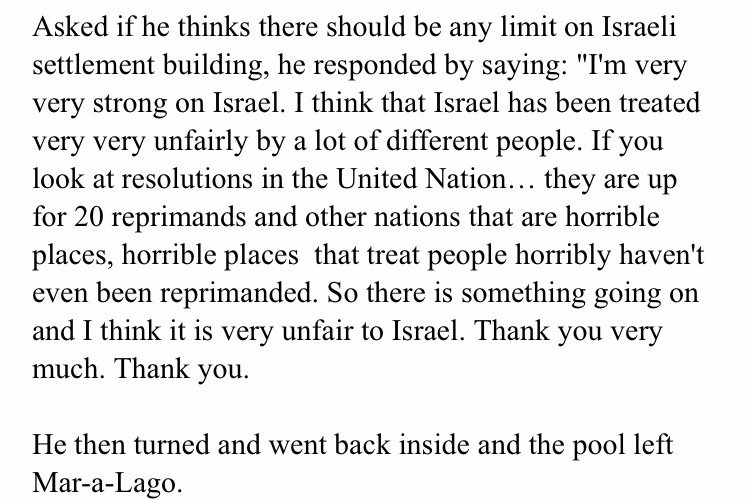 BRIAN STELTER (HOST): Let's tell some truths about lying, because the way Donald Trump lies has people rethinking some of the basic premises of journalism, like the assumption that everything a president says is automatically news. When President-elect Trump lies so casually, so cynically, the news isn't so much the false thing he said, it's that he felt like he could just go ahead and say it, go ahead and lie to you. That's the story. Why does he bend and flex and twist and warp and distort the truth? Personally I'm curious because I think Trump does it differently than past presidents. His lies are different and deserve scrutiny.

Court cases involving Trump have shown that he lies even when the truth is really easy to discern. And that's what we're seeing all again now. That's why I think fact-checking is important, but the framing of these stories is even more important. Take Trump's promotion of this voter fraud conspiracy idea. He said on Twitter "I won the popular vote if you deduct the millions of people who voted illegally." The journalistic impulse was to say something like "Trump claims he won the popular vote." I would suggest to you that better framing is "Trump lies again, embracing a far-right-wing conspiracy theory." See, focusing on the falsehood creates more confusion and gives the lie even more life. And that's the wrong way to go. Focusing on Trump's tendency to buy into BS gets to what's really going on here. This calls for more reporting and for reporters to show our work, to show that we actually know the truth.

Shaw, the Trumpers got exactly what they wanted, an inexperienced demagogue who knows nothing about domestic issues and even less about foreign policy. His word salad on the UN vote is a perfect example of his excruciating stupidity on Israeli settlements.

The Trumpers wanted to burn the effing place down and start from scratch. They'll get their wish, and so will their families. They'll suffer the most because they were conned by the best of the cons.

Andrea Bocelli cancelled and the many of the Rockettes are none too happy and have made it known.

There is a rumor (at this stage) that he is offering ambassadorships to major booking agents who can sign "A listers".
At this rate, the Grabber in Chief may be down to Andrew Dice Clay.

This can only make the Grabber in Chief more adamant that there is a conspiracy against him.

Trump had to pay a $25 million settlement in a fraud case against his fake Trump University, which cheated thousands of people out of money. Now his "Foundation" is being investigated for fraud as well. It's a well-known fact that Trump stiffed hundreds of contractors out of money he contracted them for, and no one knows how much money he owes to Russian financiers because Trump won't release his tax returns.

Why would any A-list artist risk his or her reputation celebrating this scoundrel's coronation?

Perhaps The Nuge will bring his classy act to the men, women, and children of America on Donnie's special day.

PS. President Obama will be leaving office with one of the highest approval ratings of any outgoing president.

Trump will enter the presidency with THE LOWEST approval rating in modern American history.

74 million Americans voted AGAINST Trump compared with 62 million who voted for him.

Latest coup for the Grabber in Chief is the Sprint deal which will bring thousands of jobs to America.

Problem is the deal was signed well before his election and has nothing to do with his efforts.
The facts are being reported everywhere but Faux Snooze which means it may take a while to reach the mothership which is braying about it.

The media have finally begun to check every word that the liar, Trump, puts out as fact. It's a bit late because the media was complicit in repeating Trump's lies as though they were news.

The Mothership is braying about Trump's lies? Braying? Isn't that what jackasses do?

The political party that said "character matters" supports a man who was named the biggest liar of the recent presidential campaign, who was fined $25 million for his part in defrauding hundreds of Americans with his fake university, who is under investigation for his fraudulent foundation, who praised and admired the former Communist head of the KGB who helped him steal the election, a man who bragged about his adulterous affairs with several married women, and who mocked a disabled journalist and American POW.

That's what Mothershippers believe is "character."


New motto for the incoming Trump administration and the people who voted for him:

Trump's and their loyalty is to Russia, not America.

Yes, Ray, the minority of American voters who are responsible for Trump's electoral win have no problem with knowing Russia helped put Trump in office, and apparently neither does Trump. He brushed off any thoughts of investigating this scandal by saying it's time to move on.

There is some satisfaction, however, in knowing that so many artists refuse to perform for the Pussy-Grabber-elect. I have a great deal of respect for people like Andrea Bocelli. Some people do have principles and are revolted by the idea of a bigot and serial adulterer who mocks disabled people and POWs defiling the White House.

And some people -- the fake religious right -- just don't care, as long as they're in power.


Trump's a fraud and a YUUUUGE assh*le. The world knows it.

The controversy surrounding the Rockettes's performance is just one facet of an already highly troubled inauguration. Numerous stars have reportedly turned down requests to perform, including Céline Dion and Andrea Bocelli. Singers like Elton John and Garth Brooks have released statements plainly denying inauguration rumors, while artists like Gene Simmons's wife casually told TMZ that KISS was asked to perform, but chose to decline the gig.

The Wrap has also published numerous reports detailing the inauguration committee's alleged attempts to persuade A-listers to perform. High-end talent bookers have claimed that committee members have made cash and ambassadorship offers. Talent booker Suzanne Bender has also reportedly been brought in to create a “Hail Mary” style shake-up to assuage Trump's anger at the lack of A-list performers.

I salute any performer who is principled enough to say no to performing for Trump.

Clarabelle the Clown would be an excellent fit. Don't you think?

'Drain the swamp' seems to be Trumpian for 'build the landfill'.

Trump mocked Hillary for giving speeches to Goldman Sachs, and now he's filling his cabinet with Sachers. And not a peep from his sheep.

It is almost entertaining watching the hypocrisy that is rampant in the Trump team, indeed the gop and conservative evangelicals as well. I say almost because the impact these clowns are going to have on our nation and it's people will be profound. It will not be good in the long run and our credibility with other free nations will suffer greatly.

Trump reminds me of The Emperor Who Had No Clothes. The sheep won't peep because they're high on his Twitter as it tweets.

This RN fellow is a very optimistic person.