Like All Historical Monarchs, Trump Refers to Himself in the Third Person 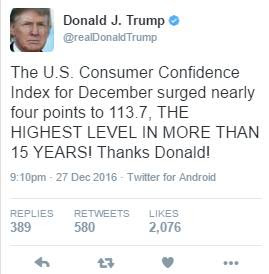 Sorry, Donnie Little Hands, but Barack Obama is still POTUS, and you're NOT.

In America, we have only ONE president at a time. And you're not it yet.

Meanwhile, as Jim Wright so accurately put it:

If that doesn't concern you, you're the problem." 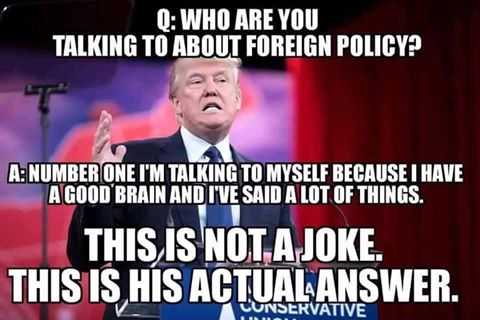 This is the guy 46% of America thinks is qualified to be president?

Next Trump will give himself credit for the sun rising in the east. What a narcissistic little toad.

For all of the attacks against him, GWB has shown class the current president can;t even recognize much less emulate.


Mr. Obama was just named the most admired man in the world and Hillary Clinton the most admired woman.Obama received 22% of the votes, while his successor, Donald Trump, took 15%. Pope Francis came in third with 4%.

This is Obama's ninth consecutive win.

In terms of the most admired woman, Trump nemesis Hillary Clinton took the top spot with 12%, followed by Michelle Obama with 8%. German Chancellor Angela Merkel tied with Oprah Winfrey for third place with 3%.

This is the 15th year in a row that Clinton won the most admired woman title, and the 21st year overall.

skud, Trump became the darling of the GOP when he ceaselessly -- up until a few months ago -- spread the lie that President Obama was not a legitimate president because Trump didn't believe his birth certificate was legal. Mr. Obama was the first and only president who had his citizenship questioned and Trump led the attack for years with this slander.

Trump does not deserve respect from decent people, and certainly NOT from President Obama.

But, but, but, ole skuddy knows what "really" matters, don'tcha know?

James Earl Carter remains relevant unto this very day, although not necessarily in a good way. In 2008, he was instrumental in the one-half vote/super delegate debacle that handed the democratic nomination to Obama over Clinton in what should have been a contested convention.

This very week, he has again taken the lead among chauvinist, democratic, male politicians by assuring the monster Trump that he will indeed attend his inauguration. By giving Trump a vote of confidence, Carter has told the world that he trusts in Trump to be malleable, to be flexible, to perhaps do the right thing. All this in spite of the ridiculous and obscene cabinet that the monster has put together. Carter has again demonstrated his negative relevance.

The GOP is gradually trying to turn us into a one party system. We are 3 seats away from have 3/4 of the states under GOP control, enough to amend the constitution along with 2/3 approval from the GOP controlled senate. They've been working at it for YEARS, gerrymandering districts, manipulating voting laws, suppressing minority votes, and now, Russian interference. They've been pumping us up with fake news and accusing reputable, mainstream news sources as "liberally biased" for speaking the truth, by people like Rush Limbaugh, and almost everyone on Fox News. And people amazingly believe them.

America is well on her wat there.

Ms Shaw,
We all are well aware how accurate the polls are and I never stated that DJT had any class, actually he does have third.

JEC was the first modern day ex-president to criticize a sitting administration. His total incompetence almost ruined the country and it took a great president to get us back on track. He would be better served by staying quiet and not say anything.

Joan, wouldn't it be great to go back to states rule and the federalists function is to protect us and deliver the mail the way the country was designed. Hopefully that will happen in my lifetime.

The Democrat party needs to just realize that none of the news about -H- was fake except her sniper fire lie. Even if Russia did hack what did they accomplish except exposing some emails that -H- should not have issued so the blame can be placed on her and the DNC for anointing her without a contest. If you want to pin blame, blame the Bern.


Drumpf will never be the gentleman statesman in office that Mr. Obama has been. Drumpf has no dignity or class. Just proves you can be white trash even with billions of dallars.

Most amazing is your commentary skuddy ole fella. Please continue to keep everyone entertained.

RN
Just curious but do you ever have anything to add to a conversation or do you just want to sling insults no matter what blog you are on.
Shaw, ducky and the rest of the "progressives" on this and other sites may insult me but at least they have something to add.

Money cannot buy class but neither can race. I do agree that during his presidency, except for he could be my son or the cop acted stupidly, bho has shown a lot of restraint. I wouldn't call it class but is was restraint against attacks. When there is talk about thin skin bho has an equal in DJT. I do hope he does more for the remainder of the country that has been on the outside looking in for the last eight years.

My apology if I hurt your feelings skuddy ole fella. Pay back can be a bitch.

Leslie, I have very tough skin so don't worry about my feelings, This is all about a difference of opinion and never anything personal. That is the reason I choose not sling arrows. If we sat down for a beer I would let you buy, that is how gracious I am.

skud, only the very few angry rabid righties think Mr. Obama has no class. He's been dignified, measured, gracious as our president, and he won both of his elections with a substantial win -- the most substantial since Dwight Eisenhower, unlike Trump who had one of the smallest electoral wins in modern American presidential elections. And because he is a liar, he keeps selling the easily disproved lie that his win was a "landslide." It wasn't and everyone but his sadly duped supporters know it. Trump's electoral win is number 46 out of 58 electoral college wins by US presidents.

74 million Americans voted against Trump, and 62 million voted for him. Figures don't lie. He won, all right, by the electoral rules, but he was a YUUUUUGE loser in every other way. He can't even get people to perform for his coronation. In my life, I've never heard of such dislike of an incoming president.

YOu're entitled to your low opinion of Mr. Obama, but the American people approve of him by 60+% and for Donald, that approval number is 43%. He's what is known as "under water" with approval by the American people. And why shouldn't he be. What kind of an American patriot sides with the former head of the Communist KGB over our American president? Americans don't like people who favor dictators over their own president.

Can you imagine if Barack Obama praised a former Commie KGB operative over George W. Bush?! You and your conservative confreres would have called for Obama's impeachment on the day of his inauguration! But because Donnie is rich, and white, and just recently put an "R" after his name, any stupid thing he does is acceptable as long as he's part of your tribe.

PS. The Cambridge cops WERE stupid to arrest a man in his own home after proving to the cops that he lived there. That's something one would expect in a Commie country. Now that Trump is "tight" with Vlad, perhaps more of that may happen here, afterall, isn't the Commie strongman Donnie's idol?

skud,
Why do you always (well almost always) respond to criticism of Trump with criticism of a member of the Democratic (NOTE TO skud: NOT Democrat) Party? It is a response that has nothing to do with the Trump criticism.