Lord Dampnut took the media to task today in his dumpster fire of a presser, calling the media dishonest, a disgrace, and its news "fake."

He then proceeded to promote his own alternative facts and fake news, bragging about his much less than epic electoral college win which, contrary to what this bizarre man says, was not greater than any Republican's electoral college win. Trump is a championship bull$hi++er, but facts are stubborn things and even though Trump can bull$hi+ his supporters, the rest of the country and the world know him for the repulsive fake and liar that he is.

Immediately after the conclusion of President Trump's press conference, CNN's John King used facts to prove that Trump's claim that he inherited a mess from former President Obama was a lie.

No, Trump's victory was not the biggest Electoral College win since Reagan

When NBC News' Peter Alexander pointed out the inaccuracy, Trump said he meant he won the largest electoral win of any Republican since Reagan. He was informed that  won with 426 votes in 1988.

"I was given that information," Trump said. "We had a very, very big margin."


That's the sort of sloppy, maladroit administration Lord Dampnut is running. Someone gives him some information, and he runs with it without checking its veracity. Then the facts come out, and Trump looks like a braggadocio clown. 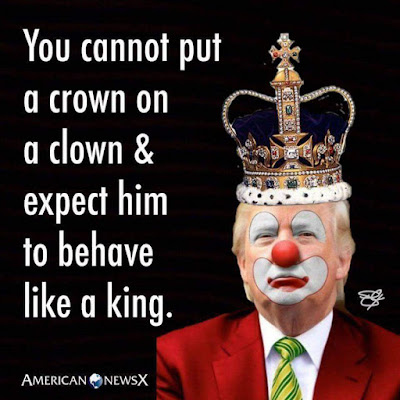 From "The Smoking Mule" blog:

"To cross that divide into totalitarianism, the unwashed horde needs shaping and direction. Napoleon scooped up Robespierre’s fumble to help create the totalitarian template with censorship, propaganda, and secret police. He controlled the medium and the message. Whether it was the hedonistic French munching their cheese, sipping their wine and contracting venereal disease while allowing overlords to do their thinking for them, or Americans digesting the latest Fox News indoctrination, true believers need a charge to reach peak fanatic heat. The state must dictate the talking points and the history. Compliant media acts as the mouthpiece. Plugging in some “alternative facts” is an effective tactic. Altering or destroying history has always served such regimes well. Libraries are sanitized and the press is cowered into submission as they pledge fealty to the party line. As historian William McCray once observed: ” Historical consciousness is to society, what memory is to an individual. A society without it, is subject to barbarism and tyranny.”

One can cede the field to distortion or deception. One must choose wisely. There are plenty of warped assertions to select from in the history and science boxes. For those of a racist tint, asserting that slavery was actually a benign system is a good seller. Conspiracy peddlers can convince the science-challenged segment that global warming is a hoax as is that pesky theory of evolution. Empirical proof is a liberal concoction, it has been that way since the first bacteria found a home in perverted Uncle Lester’s capacious colon: prayer is in, the pharmacist is out. And to make the fabrication cycle complete, throw a bone to the paranoid types. Really feed their delusions by pushing the credulity and hysteria buttons by manufacturing stories about “massacres.”

"A sweep through the historical register should be cause for foreboding. The rejoicing of those masses is often short-lived. As the phrasing goes, ” The revolution devours its own children.” Historian Gabriel Liulevicius warns that ” It is dangerous to be unaware of the historical record and sinister ideologies.” America is in a state of crisis. It is consumed by hyper-nationalism and a fetish for a mythical pure free-market ideology. An ideology that cloaks the more malignant streaks of its ardor by pinning its idiom to long-deceased Puritans and Founding Fathers. Such is the argot: ” America is a Christian Nation.” Meaning, let’s play theocracy. Or it is manifest in such disturbing cult bands like the Tea Party, an upgrade on the John Birch Society with right-wing media and the NRA as its benefactors. With all the purported reverence for those Founding Fathers, perhaps the most eloquent of that intellectual elite should be heeded. To quote Thomas Jefferson: ” There will be major battles between rapacious capitalism and democracy.” The battles never cease and the crisis does not lessen, and as Dante said: ” The darkest places in hell are reserved for those who maintain their neutrality in times of moral crisis.”

Hmmm, wonder what that's about. Seems like a desirable position in most administrations.
There must be a plan to get rid of this ditz.

Trump makes a bigger fool of himself every time he opens his mouth.

Trump's presser was great because it gave America and the world another look at how batshit crazy the president is. Also, a slimy liar, willing to say anything to puff up his already bloated, pus-filled body.

How does he have as much as 39% approval. Are there that many morons in this country?

The more desperate Trump gets expect increased lies and even greater incompetence.

Sounds like a smart career move by the Vice Admiral. Who in his or her right mind would want to be tainted with the stench of the Trump administration. It's already a failure.

Jerry, we shouldn't be upset when Trump opens his maw, because it always makes him look foolish and his number go down. Today's presser was the worst I've ever witnessed in my life.


Clearwater, a few of the GOPers I know who voted for Trump are embarrassed at how awful he's been and how incompetent his administration is.

CNN’s John King said he received a message from a Republican senator who wrote, “He should do this with a therapist, not on live television.”

And Trump's supporters as well. They all need deep therapy.

Trump today about the press:

The press -- the public doesn't believe you people anymore.

WRONG! The people don't believe TRUMP! He's got only a 39% approval rating! a MAJORITY of he people do not believe HIM. He's a b.s.er of the first magnitude. The public knows this.

He needs to be in a padded cell.

" Ahh, but the strawberries that's... that's where I had them. They laughed at me and made jokes but I proved beyond the shadow of a doubt and with... geometric logic... that a duplicate key to the wardroom icebox DID exist, and I'd have produced that key if they hadn't of pulled the Caine out of action."

Ducky, yes, I can almost hear the sound of the steel balls being ground together in the palm of his tiny hand.

Ducky, Here's the thing that should surprise me, but only makes me sad:

Trump's supporters thought that he kicked ass in that press conference. Triumphed against a sea of enemies who couldn't keep up with his brilliant mind.

No, seriously, that's what they are saying.

Shaw - "Ducky, yes, I can almost hear the sound of the steel balls being ground together in the palm of his tiny hand."

Unfortunately, his hand is only big enough to hold one steel,ball.