NOT JUST A FOOL BUT A FRAUD, A CON, AND A LIAR 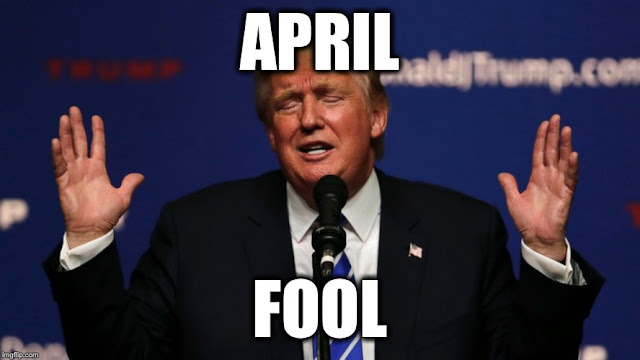 NOT JUST A FOOL, BUT A FRAUD, A CON, AND A LIAR

This is your occasional reminder that the president of the United States is a fraudster:

A federal judge has approved a $25 million settlement President Donald Trump agreed to late last year in a bid to head off a civil fraud trial over his Trump University real estate seminar program. U.S. District Court Judge Gonzalo Curiel issued a 31-page ruling Friday deeming the deal fair and overruling claims from some former Trump University students that they should get larger payments or be allowed to drop out altogether in a bid to force Trump into a trial.

Under the settlement, former Trump University students are expected to get 80 percent to 90 percent of what they paid — typically about $1,500 for a three-day seminar or $35,000 for an in-depth mentorship program. Curiel called that result “extraordinary” when measured by the yardstick of other class actions that are often settled for pennies on the dollar.

And let’s not forget that Donald Trump attacked this judge and said that he couldn’t be impartial because of his Mexican-American heritage.
Posted by Shaw Kenawe at 8:14 AM

Enwrapping all this chaos and conflict has of course been the Trump-Russia Affair — a political train wreck so faultlessly vacuous in conception and execution, it makes one look fondly on the comparative intelligence of Watergate. Who knew that Machiavellian incompetence could be so immense, and strutting, and recidivist?

And just what will this blockhead of a president be doing in his 11th week? God help us. He'll be meeting with Egypt's President Abdel Fatah al-Sissi, Jordan's King Abdullah II, and … and … pop a Xanax … China's President Xi Jinping, who will, likewise, swallow Trump whole. The Chinese aren't as carefree and lighthearted as the Germans, whose leader, Angela Merkel, Trump has already met with. A "senior European diplomat" summarized that meeting thus: Trump "frequently and brutally [kept] changing the subject when not interested." Obvious to everyone present was that, as the NYT's Roger Cohen put it, not only Trump’s temperament but his "preparedness was roughly that of a fourth grader."

A mere 10 or 11 weeks — all of which seems like an endless eon. One ponders the chronological accumulation of this president's chaos and incompetence — try, just try to imagine their 111th week — and one wonders if such an accumulation is even possible. Can Trump's rank ineptitude and madness just go jaunting along — with impunity, with no earth shattering consequences? That political party Trump is at war with (his own) would be well advised to start asking that question and then planning a constitutional escape hatch — for itself, and all of us.

This is an administration of the sidewalk grift, not the big con. It's three-card monte on the A train, not an epic swindle on the order of Ocean's 11. For all his alleged millions, and for every one of his gold-plated commodes, the president* is a glorified street hustler. It's almost a shame that he may have a congressional committee and/or the FBI running him to ground. He should get hooked up by a 60-year old bunco cop waiting out his pension in a leaky precinct house.

Kevin, thanks for that. Pierce is great, and he exposes the Fraud-in-Chief with some really accurately funny prose.

Here's one that's just as good, and it's written by Rick Wilson, a Republican pundit and strategist:

The manic flailing before the cameras, the ridiculous lie about a ‘whistleblower’ who turned out to be two White House officials—no, the intel chair wasn’t the brains behind this farce.

A fraud, a con, and a liar walk into a bar. The bartender looks up and says, "What'll you have Mr. President?"

Ms.Shaw, your bitterness is consuming you, that cant be healthy.

Ms.Shaw, your bitterness is consuming you, that cant be healthy."

No. Anonymous @5:12. What is unhealthy is that you and others who disagree with me continue to come to my blog and complain, like bitter little trolls, about what I post on my own blog. No one compels you to visit here.

You and the others who continue to come to P.E. and leave your whiney comments need to dig deep within your shallow twisted souls to understand why you do that.

Shaw... at least Anon is polite, unlike many of the other family values and character matters crowd.

Dave, the Anonymous who calls me Ms. Shaw has come here before and left less than "polite" comments. This last one was tame.

It's a puzzlement why Anonymous and "Little Old Me," and "TOM" and other escapees from WYD blog come here at all. It's a form of self-flagellation that, as I said, is the real unhealthy behavior.

Progressives Are Such Despicable Liars!

Is that you, Donald?

Imagine! The POSPOTUS came to my blog to express himself!

"We"--you and me, friends, and y/our children, too-- will NOT 'recover' from ElDouche, his gunsels, and the depredations of the GOPhukkks in Congress in the life-times of ANYONE over 50...IF EVER!

Abdullah's a very sharp guy. Maybe he can talk some sense into Trump about the Middle East and how to fight Dâ'ish (ISIL). Not much hope, I know. I'll be relieved if Trump avoids referring to the Egyptian leader as "President Fat Sissy".

It's a puzzlement why Anonymous and "Little Old Me," and "TOM" and other escapees from WYD blog come here at all.

The goal is to make the target waste time and energy. There's no effort involved in throwing out an insult of a random non-sequitur. But it can take effort to respond to it.