Where does your state stand in legal and illegal corruption?

Right wing nuts often come to P.E. to insult Massachusetts (which, in their cramped little minds, is supposed to reflect on me), but they do so in laughable ignorance.

Massachusetts was recently named the best state in the U.S. by U.S. News and World Report.  The map and chart below illustrate that Massachusetts is also one of the least corrupt states to live in. Keep in mind that those Goopers who denigrate blue, blue Massachusetts, on average, live in red, red states that are among the poorest, least desirable, and most corrupt states in which to live.

Harvard study: Kentucky’s state government one of the most corrupt in the country


A 2014 study by Harvard University’s Center for Ethics finds that Kentucky’s state government is among the most corrupt in the country, and second to none when it comes to the “legal corruption” of political favors in exchange for campaign contributions.

Whereas the most common measure of corruption uses only federal convictions, the Harvard study measures corruption based on the perceptions of experts, surveying hundreds of news and investigative reporters covering state politics. The reporters ranked the existence of both illegal and legal corruption in the executive, legislative and judicial branches on a scale of 1 to 5, from not common at all to extremely common. 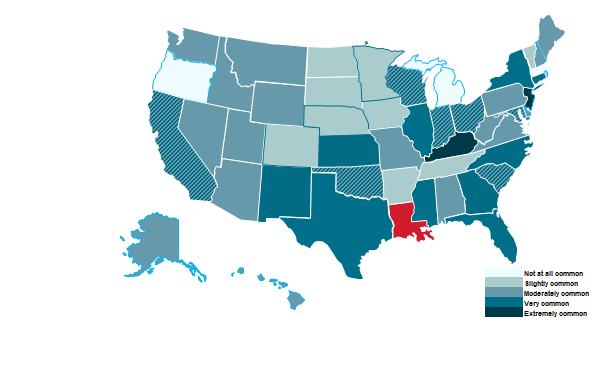 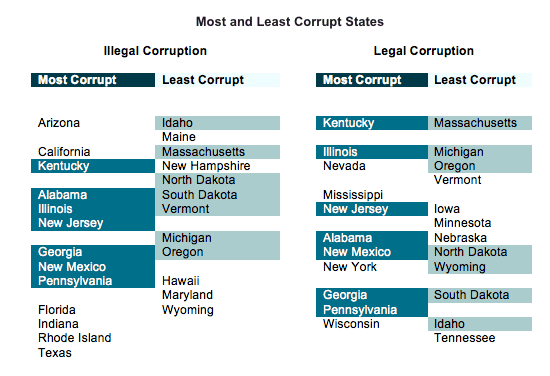 Given Louisiana's track record, its officials probably don't cooperate in any study of corruption unless you bribe them to do so.

That general area is like our own internal Third World.

-- Infidel753, posting from "not at all corrupt" Oregon

It's your delusion and defense of some of your idiotic stances to claim every one of your critics is just a partisan hack. Enjoy your delusion.

Maybe LA is red cause they're so corrupt they were over qualified for this survey...

Infidel753,Louisiana has always been at the top of the list for most corrupt state, but it didn't submit any data for this particular study, and probably did not do so for the reason you stated. Ha! And congrats to Oregon for making the not corrupt list for legal and illegal corruption!

Anonymous @9:15 AM, nowhere do I claim what you wrote. Consider taking a remedial course in reading comprehension.

Red states run by conservative governors and legislatures are among the poorest and most corrupt. They also the most religious. Massachusets is one of the least religious states and the least corrupt is there a connection?

We in NY don't seem to do so well on legal corruption. Too bad we lost Preet Bharara.

Shaw, your anonymouses seem to run the gamut politically. And thanks for the Tom Toles' toon. For whatever reason I don't see him anymore. Damn Kindle subscription doesn't include political cartoons. Love the eagle, too.

At least we know that 35% of the American people are certifiably crazy.

Sorry skud, but I had 4 trolls in comment moderation and hit the button to delete -- your comment was accidentally deleted with them.

But for your information, this study was taken in 2014, when Bobby Jindal, a Republican, was the governor of Louisiana.

And if you believe what you wrote -- that California has always been corrupt, then you indicted the Great Sainted Ronald Reagan who was the governor of California during that "always corrupt" time, and also, Arnold, a Republican governor as well.

No problem. I don't believe Bobby was Governor when Katrina hit and that was the biggest political corruption incident in my lifetime. Regardless of which party was in power the people were not served and that was because of an inept governor and a corrupt mayor who profited from others misery. Doesn't help that the people who rely on the government to make their decisions had no leadership.

As to Calif, I don't think they were in the mess they are today under Reagan, maybe Davis was the start of the downfall. Arnold was an actor, of sorts, so how he got in is beyond me just shows people don't think they just react.

History gives us lessons, we just don't learn. I would like one election where I can say I support a candidate not I am against the other one but that hasn't happened since WJC's first term

skud, do you want us to believe that states are corrupt only under Democratic Governors? Because that's what you're implying. And it's just not true. If you look at the map and chart in this post, you'll see that corruption is an equal political opportunist both legal AND illegal corruption.

Skud... what downfall in California? How bad can a place be when literally millions and millions of people choose to live there?

If there was a "downfall" I would agree with you it did not start with Reagan. It started with Howard Jarvis and prop 13 which starved local and state governments of property taxes foisting upon people lotteries and dubious sin taxes to cover day to day expenses.

There is a lesson to be learned here. When states are hamstrung for the necessary revenue to tend to the general welfare of their people, those low tax rates do not generate the replacement of the funds lost in tax cuts. Just like what we are seeing today in Kansas.

And yet the GOP and conservative partisans continue in their belief that tax cuts pay for themselves. It just is not true.

Ask any good Eisenhower Republican what a reasonable tax rate would be and how that might help solve a lot of the problems we face here in the US. The answer might surprise you.

Proper resources can cure a lot of corruption.

Shaw, Read my response above and you will see that I did not place all the blame on democrat governors. Politicians are corrupt because we let them be. We keep them in office because they serve our individual needs. We have given them power and power corrupts.

Dave, California is broke as are many states. I support them succeeding from the US as they are proposing.
What is a reasonable tax rate. If we did away with all tax deductions including mortgage interest and charities and went to a graduated tax rate of 10%, 15% and 25% based on income would that not be fairer than the way we do it now. That way everyone would pay their "fair share" and the rich would not be able to offset their income.

Sorry Skud... the rich don't get off that easy in my book. Ike rate was over 80% for people in the highest bracket and it allowed us to build our middle class, highways, infrastructure and more.

A country such as ours, even with the limited idea of a limited government, is going to take a lot of $$ to be efficient and provide for the "common good."

I think one to remember is that the tax rate is only for the amount made "ABOVE" a certain amount. I see no reason not to return to Ike's rate, but I'm generous. Let's split the diff. Everyone making over a million pays 50% of it in taxes.

BTW... on the 10% plan, after social security, I'd be looking at an increase of about $4000 a year with your plan. That's nothing I can afford and still feed my family and pay my bills.

But the millionaire still has his first million at a low rate and still keep 500K a year by my numbers... plenty to live on. I think.

David,
Yours is the Robin Hood plan. Take from the rich who will still be rich and give to the poor so they will have no incentive to do better.

When we had the Ike plan everything was deductible so the rich could really manipulate their taxes to lower them. Remember when Reagan had a tax cut and a tax revenue gain. He also cut deductions.

What you discount is if you take away All deductions the rich will pay considerably more in taxes, which is the leftist goal, because they can't use the deductions to reduce their taxes. The middle class does not have the means to use deductions so they will not be hurt. The poor will remain unchanged because they don't pay currently and that wouldn't change. Charities and churches may be hurt but they shouldn't be tax deductions currently.