Not even 100 days into his presidency, Trump has done exactly what he attacked Hillary Clinton for contemplating.

Some have described this reverse as “hypocritical.” This description is not accurate. A hypocrite says one thing while inwardly believing another. The situation with Donald Trump is much more alarming. On October 26, 2016, he surely meant what he said. It’s just that what he meant and said that day was no guide to what he would mean or say on October 27, 2016—much less April 6, 2017.

Every decision presents risks and costs, and any responsible decision maker insists on a detailed itemization of those risks and those costs. That cannot have happened here. Trump has walked into a military confrontation that implicates regional and global security with only the haziest notion of what might go wrong. One friend of mine has warned: “If it were good foreign policy, Trump wouldn’t be doing it.” Foreign policy is hard, and even the best process does not guarantee good outcomes. Sometimes you get lucky, and can escape the consequences of a bad process. But the odds are the odds.

Ninety-nine times out of one hundred, bad processes lead to ugly results. 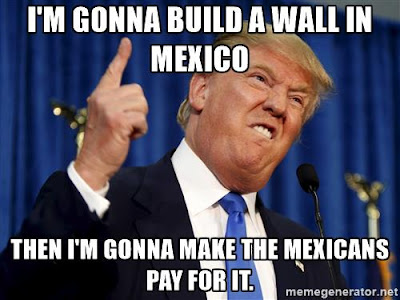 
Only Progressives, Zblacks, foreigners and Anti-Americans thrived under Barack Hussein Obama. I still seriously still have doubts that he was an actual American Citizen. He ruled as an Anti-American, and an American Hater . Sort, but I gotta call em like i see em.

Thanks for the link to that, Shaw. You've probably read this, but here's Charles Pierce today. It's gonna be a scary 4 years. Can we hope for fewer and pray it's not more?

So very interesting to watch the battle of wall funding.

It all seems so easy. Why are we even contemplating shutting down the govt over US taxpayers funding the wall? Candidate trump promised, even used that word, many times that Mexico would pay for the wall. "Believe me" he said, often to thunderous applause.

Why I might ask then, is funding being requested from Americans? Especially when the great majority of Americans do not want, or support the wall. Neither I might add, do any of the elected federal officials who have a district bordering Mexico. Not one.

But maybe President Trump knows more about all those districts than their representatives.

I don't even think Trumputin realizes he's lying, at this point. His mental illness has so completely subsumed him, and those enablers around him, that he really will need long-term institutional care in the VERY near future. Then, we can set about restoring America and cleaning up yet another Republiscumbag mess.

BTW, Joe. #45 and his administration is under FBI investigation for possible collusion with a foreign power hostile to the US.

President Obama finished 8 years of his presidency with nary a whiff of scandal. Trump's been in office less than 100 days, and he's got the FBI investigating him, he had to pay $25 million in a lawsuit for defrauding Americans with his fake Trump University, and another judge in Florida just recently ruled that he must pay a small business owner the $300 thousand dollars Trump tried to cheat him out of for painting one of his golf course club houses.

What a guy. And you and your pals admire that. Pardon us all as we gag.

PS What is Zblack? Are they related to Zee French????

"Joe" no doubt escaped the Swamp as all they do over there is whine and attack others with juvenile slurs and names. Sorry "Joe", not buying into that. Come back if you ever have an actual thought in your head.


Dave, in one of Trump's books he told us exactly how he bamboozled the people he tried to make deals with: Exaggerate what he'll do, tell big fantasy lies, then make the deal.

Trump did that with the wall. He got his supporters (who should know better, but don't) that Mexico would pay for building a wall on American property? Or in the middle of the Rio Grande? Or on their side of the river, then charge Mexico for taking their land and building a wall they don't want on it.

Trump is clearly out of his demented mind. And that says a lot about the people who still believe in his reckless agenda.

Kevin, thanks for the link to Pierce. Always enjoy reading him. As for Trump and the next 4 years, my guess is that he'll get bored. He's probably already regretting he won the presidency. There's also the possibility that he's committed or committing all sorts of impeachable offenses.

I just read Pierce's article on Trump's AP interview that Kevin linked to.

TRUMP: But President Xi, from the time I took office, he has not, they have not been currency manipulators. Because there's a certain respect because he knew I would do something or whatever. But more importantly than him not being a currency manipulator the bigger picture, bigger than even currency manipulation, if he's helping us with North Korea, with nuclear and all of the things that go along with it, who would call, what am I going to do, say, "By the way, would you help us with North Korea? And also, you're a currency manipulator." It doesn't work that way…And the media, some of them get it, in all fairness. But you know some of them either don't get it, in which case they're very stupid people, or they just don't want to say it. You know because of a couple of them said, "He didn't call them a currency manipulator." Well, for two reasons. Number One, he's not, since my time. You know, very specific formula. You would think it's like generalities, it's not. They have — they've actually — their currency's gone up. So it's a very, very specific formula. And I said, "How badly have they been," ... they said, "Since you got to office they have not manipulated their currency." That's Number One, but much more important, they are working with us on North Korea. Now maybe that'll work out or maybe it won't. Can you imagine? ...

I fear for America.


BlueBull you have been very much missed. Glad to see you here!

I sort of guess "Joe" was an escapee from the Stench Trench. "Joe" is about as rational as a rodent in an outhouse.

Hope all is well with you, B.B.

"Joe" is engaged in what I call "change-the-subject trolling". He can't address the point about Trump's inconsistent statements and careless actions, so he throws out a bunch of random accusations backed by nothing at all, to distract people.

The quote from Trump is kind of the opposite extreme. He never realizes he can't address a question, so he just churns out an endless string of random sentence fragments vaguely related to the question. The scary part is that his thought processes seem to work the same way.

At this point it's anyone's guess whether any of that stupid wall will ever get built, but Trump's ongoing insults and relationship-shredding aimed at Mexico will have consequences.

Politicians lie, that is part of who they are and it does not matter what gender or party, they all lie. Even Saint Obama lied when he was running for office and after he was elected president. The big -H- lied about most things. The difference is she was exposed where obama was not. Trump lied during the campaign and continues after elected.
Now the truth. The people who are upset about Russia "involvement" in the election should be mad at -H- because she is the one who sent and then covered up her emails. The people who want DJT to release his tax returns should demand obama release his college transcripts and applications as well as his past passports. No law says he has to but no law says a president release his tax returns it is just that most do.


skud, Donald Trump and his administration is under FBI investigation for possible collusion to steal the 2016 election. FACT. He also has been fined millions of dollars for being a fraud, and a swindler. FACT He is polling the lowest of any new president in American history for a newly elected president. FACT

None of that is Hillary's fault. You keep trying to blame her for the colossal idiocy of the right wing in voting for Trump. It's not going to work.