When the White House first threatened to revoke the security clearances of Trump critics, a Republican senator said, "It's a banana republic kind of thing."

Donald Trump did it anyway. 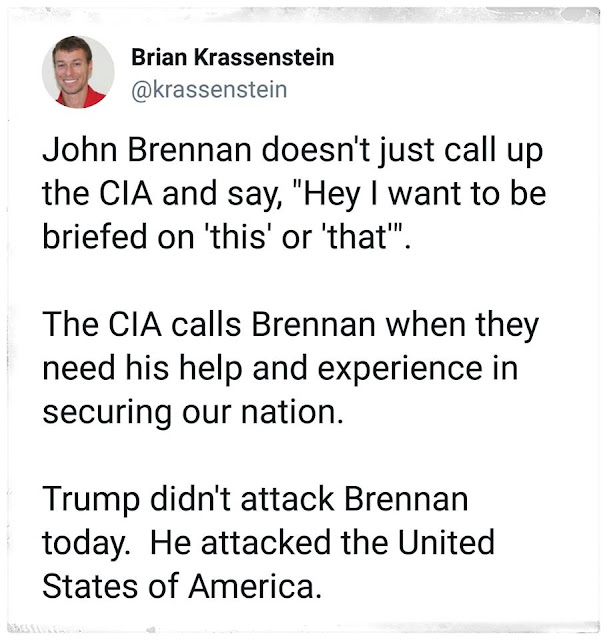 And now in an interview with the Wall Street Journal, Trump admitted it was not one of the reason Sarah Huckabee Sanders cited in her press conference. He just flat out said the following...

That something that had to be done was to revoke the security clearance of Brennan.

Look, he's President and can mostly do what he wants.

I just wish the Admin would get on the same page, tell the same truth and own it.

And then let the chips fall where they may.

But the "professionals" in the WH keep trying to protect Trump from Trump by lying and covering up for his and he leaves them in the dust by telling the truth.

Ala the Lester Holt incident.

Trump has now become Nixon. May he end up the same!

When we voted for Trump, we voted for the bull in the china closet. And, yes, he’s disruptive. We need that, believe me, Dear. We need a POTUS who mocks the disabled, who sneers at POWs, who insults Gold Star families.

We Good Chris-CHENS need a POTUS who brags about bedding other men's wives, who cheated and on all of his wives. We Good Chris-CHENS want a disrupter who cheats people out of their money -- especially when they spend that money on a fake university. Or who refuses to pay workmen and women for their services. How delightful!

We Good Chris-CHENS love the Disrupter-in-Chief, especially when he embarrasses America when he's visiting our allies. And most of all, we Good Chris-CHENS love reading his obsessive TWEETS about a woman he himself hired to work for him in the Oval Office. We love to see him waste his time on revenge Tweeting when he should be running the country. How boring that must be for his great intelligence!

Most of all, our Beloved Disrupter is beloved by us Good Chris-Chens because he ripped babies and children from their parents and some of those parents will never see their babies and children again because The Great Disrupter did not put in place a system to track whose children belonged to whom. Oops!

But that's a small detail when we Good Chris-CHENS have a world class Disrupter who's Making America Great Again through all of these wonderfully disruptive things he's doing.

Oh Dear! Let us not forget his lying. That's a goodie for us Good Chris-CHENS too!