"If it weren't for double standards, the Republican Party would have no standards at all."

Mike Pence during the Clinton/Lewinsky scandal:


"If you and I fall into bad moral habits, we can harm our families, our employers and our friends. The President of the United States can incinerate the planet. Seriously, the very idea that we ought to have at or less than the same moral demands placed on the Chief Executive that we place on our next door neighbor is ludicrous and dangerous. Throughout our history, we have seen the presidency as the repository of all of our highest hopes and ideals and values. To demand less is to do an injustice to the blood that bought our freedoms.

Our leaders must either act to restore the luster and dignity of the institution of the Presidency or we can be certain that this is only the beginning of an even more difficult time for our land."

This is the guy Mike Pence said was a blessing to serve as his VP: 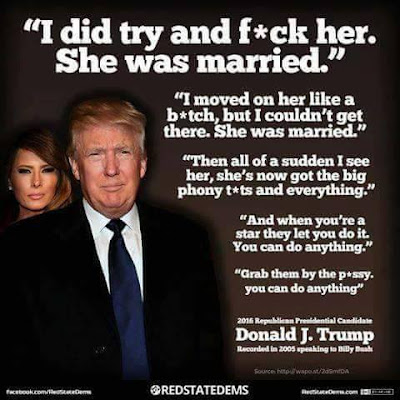 The sinless champion of "Christianity"

Shaw... your title should be "The Wearisome Double Standards!"

In addition to a sudden belief that we're not "electing a pastor" let's add the following.

Deficits do not matter.

States rights, at least for clean air standards in California, do not matter.

Negotiating with rogue, thuggish and killer regimes is now acceptable because they can be trusted.

It's okay if our allies do not respect us.

Lying in office is now fine.

Should I go on?

Maybe others can add a few more...

The explanation for the GOP supporters of Trump is that pigs attract other pigs.

Dave, here are aM few more: Hiring Mike Flynn who lied about meeting with Russians and who was an agent for a foreign government and did not reveal that when he was tapped to be head of the NSA. Having most of his hirees quite or be fired for various shameful reasons (remember he bragged he hires only the best).

One of the deplorables who still support Trump came here and tried to trash the Democrats. It's very telling that that sort of person never denies what Trump is, a liar, a cheat, and a moral pig, and all he can do is trash the Democrats! Ha! It must suck to be a Trump cultist, he's everything the conservatives detest in a human being. But hey, for Trump's cultists, party is more important than America's reputation.

They will live to regret their choice.

Anon, A party that oinks together, votes for a pig together. Or something like that.

Think of the thousands and thousands of men and women who gave the ultimate sacrifice fighting stinking Nazis in WWII, and now the Republican Party welcomes fking Nazis into their tribe. And those same assholes complain about Black athletes kneeling because of injustices?

The republican party has, IMNHO, completely lost the integrity it once time had. Party leadership as well as many in Congress and the Senate have zero moral authority.

tRump The Great Orange Turd, as well as HIS party are a disgrace to America and every moral values this nation has stood for.

Rev, You forgot the 1st amendment does not matter, innocent until proven guilty doesn't matter. The fact that you blame one side for a double standard is laughable. They are politicians so they have no standards. The left blames the rich yet the rich are the left, double standard. The left says they are pro worker and unions yet they marginalize both. Both sides are against separating illegal families yet no one wants to enforce the law. The right is all for families yet the gut funding for schools.
There is enough double standards to go around for both sides. As a card carrying independent I can see the hypocrisy on both sides and it makes be glad to be able to vote who I think is best versus follow the train.

skudrunner: "Rev, You forgot the 1st amendment does not matter, innocent until proven guilty doesn't matter."


skudrunner: "The fact that you blame one side for a double standard is laughable."

The Democratic Party never bragged about being the party of "Family Values" and the "Party of God." We liberals understand that politicvians have moral failings. The current GOP which always ran on God, Guns, and Tax Cuts, have yet to say anything about #45's piggish morality.

Skudrunner: "They are politicians so they have no standards."


While the Dems are no angels, what the GOP has exposed themselves to be with Trump as its leader is now legendary in the annals of corruption and immorality. There is no bothsiderism on those subjects.

Your resident troll, skudrunner, hasn't replied to your answer. He can't. Barack Obama is not corrupt and was a president we Americans were proud of. The best the Trumpanzees can do is lie about the Obama presidency. They can't defend the pig they support. And Trump is a morally degraded human being. He's not fit to be stepped on by Obama.