The Malignant Narcissist in the White House 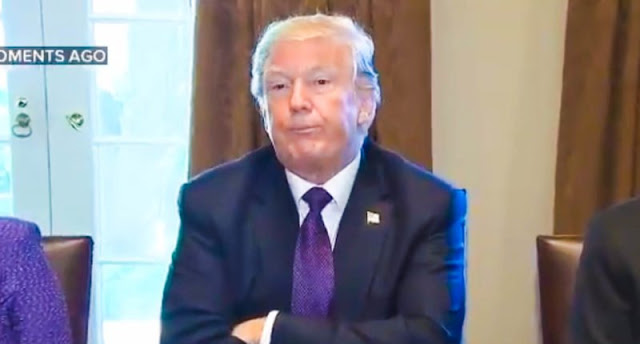 
Trump spent both Sunday and most of Monday very much not talking about John McCain. After issuing a brief condolence to the senator’s family on Saturday evening, one that included not a word about McCain himself, Trump visibly sneered when reporters tried to get a comment from Trump on Monday.

Trump’s dodging of questions (perhaps he developed a sudden and previously unknown bone spur) stood in stark contrast to both Republican and Democratic lawmakers who appeared both in the Senate chamber and television studios to praise their former colleagues.

According to the Wall Street Journal, Trump thought that McCain was getting too much attention. And to underline that he couldn’t stand to see anyone else being the focus of the nation,

Trump described the attention being paid to McCain as “over-the-top and more befitting a president.”

But on Monday evening, Trump was finally forced to utter one whole sentence worth of kind words, saying “We very much appreciate everything that Senator McCain has done for our country.” And that was it. Trump’s serving of crow was ultimately small, but gall makes for bitter seasoning, even on a snack.

National Park Service employee tells me they got an email around 10am ordering flags at half staff. Around 2:30pm, email went out cancelling it and saying flag should go back to regular order. And around 5:30, another one went out saying to lower again.

tRump in that photo looks every bit the pouting insolent little orange turd that he is.

In the eyes of his adoring cultists (34% of America) tRump acted just fine. After all Senator McCain was not one of them. In other words a RINO and therefor a traitor to their cause. A cause they mistakenly believe a majority supports. For the remaining 10% that still tepidly support the orange turd and make up the balance of his overall 44% support who knows. Maybe someday they will finally have had enough of the man-child that America presently calss its president.

Trump hasn't been able to break 50% since he was elected, which means a majority of the American people are against him.

When his pathetic cultists come here and crow about the fact that Trump's at the same percentage of approval as President Obama was at this point in Mr. Obama's presidency, they think they've won some point. They're too demented to take into account that both Mr. Obama and Ronald Reagan were also in the middle to low 40 percent early their presidencies but started out very popular and went up and down during the eight years they were in office.

Trump was underwater on day one of his presidency; and after a year and a half, he has never been able to get to 50% or rise above it, despite all his bragging about how magnificent he and his presidency is.

The American people aren't buying his b.s. Only his cultists are blind to it and lap it up like ice creasm.

Presidents for years, decades even, have found a way to be magnanimous both in political defeat and when the moment calls for it, for example when even a political enemy passes away. Humility in victory and grace in defeat is a maxim our best leaders have lived by for years.

President Trump is either unwilling or unable to live within what up until a few months ago were considered basic norms of human decency.

But it is not just President Trump. GOP leaders have blamed even the late Sen McCain for this, for choosing to end his treatment as a political stunt, for being petty. They've attacked a man who can't even answer his critics.

This is the party of family values, of God, of law and order of morality.

Their genuflecting at the altar of Trump is incredible.

Dave, what you wrote is the truth. My guess as to why Trump is not able to live up to those basic human decency standards is that Trump is a damaged man and he cannot see past his own feelings of, perhaps, insecurity and fear, to be magnanimous to ANYONE who's displeased him. In a non-political person, that sort of personality is toxic, in a POTUS, it is disastrous, as we have all witnessed.

We knew Trump was tempermentally unfit to be POTUS; Trump proves this every day with his childish Tweet tantrums and his disgraceful behavior toward the late John McCain and to anyone who doesn't slavishly worship him.

I've been reading certain far right blogs (you know who they are) to get a feel for how his cultists view this sordid chapter in Trump's presidency, and, SUPRISE! SUPRISE! they see nothing wrong with Trump's ugly show of immaturity and disrespect toward a military man who suffered painful torture for his country. No longer can any of those people ever talk about "supporting the troops" or criticize the NFL players who kneel in respectful protest to injustice. Those bloggers have shown that they support a man with no honor or decency rather than one who, flawed as we all are, was everything Trump isn't: courageous, honorable, and loved by many.

That's what burns Trump the most, John McCain's popularity. Trump will NEVER be loved and honored the way John McCain was and will be for generations to come.

Shaw... it's interesting. It's as if working across the aisle in Congress is a bad thing. Because that means you are weak, as opposed to interested in legislation that could improve America. But in Cultland, only the policies that the GOP wants will improve America. So for them, compromise is tantamount to surrender and accepting bad policies.

The Captain of the Mothership shared her amazement with this statement... "the Left is LOVING McCain’s actions against his party and touting his ‘crossing the aisle’ as if they EVER F’ing DO??" It's as if they think Bi-Partisan legislation only involves one party reaching across the aisle. In spite of many bills worked on by leaders in both parties, some people think only the GOP, or Sen McCain ever crossed the aisle.

It's such a narrow view of reality focused on the zero sum game of winning at all costs. Even if it means you have to demean the character of a genuine American hero and statesman such as McCain.

Oh, this is rich, especially coming from Republican Michael Steele:

Michael Steele Doesn't Sugarcoat It: 'You Get To Stupidland On The Trump Train'

During a panel discussion on MSNBC, host Hallie Jackson noted that Arizona Senate candidates Kelli Ward and Joe Arpaio had both spoken ill of McCain while praising Trump.

“The inclination [is] to just dismiss Ward and Arpaio because they are just out in Stupidland,” Steele explained.

“How do you get to Stupidland?” Jackson asked.

“You get to Stupidland by getting on the Trump Train,” Steele replied. “It takes you directly there, baby, non-stop. It’s not even a coach fare. It’s first class all the way.”

“And they’re on that train,” he added. “You cannot dismiss them in a primary. You cannot walk past that — that reality — because we don’t know how that vote is breaking down.”

I got this at Charles Pierce's. Life is too short to read Trump's Twitter feed.

Ivanka Trump & Jared Kushner had NOTHING to do with the so called “pushing out” of Don McGahn.The Fake News Media has it, purposely,so wrong! They love to portray chaos in the White House when they know that chaos doesn’t exist-just a “smooth running machine” with changing parts!

Do you suppose there's a reason smooth running machine is in quotation marks? It certainly should be. No collusion! No chaos!

Kevin, the wannabe Dictator-in-Chief is now threatening Google, Twitter, and facebook because his paranoia and stupidity believe they're unfair and out to get him

#45's cultists have said nothing about this threatened abuse of the 1st amendment's guarantees for a free press and free speech. When the government threatens, and unfortunately this maniac is part of the government, that's unConstitutional.

Normal Americans (not his cultists) and the rest of the free world see Trump's administration as chaotic and criminal. Just like he is.

Shaw... it speak volumes that many partisans cannot celebrate the life of John McCain. McCain voted with the GOP majority over 85% of the time. He was reliable vote for what was once conservative orthodoxy. But that 15% is depriving them of a chance to seem normal.

The great majority of America are not the people who commenting at Geez, WYD, Freethinke Franco and leaving disparaging comments at FOX News because they dared honor McCain. The people of that crowd number about 40%, and to quote former Sec Def Donald Rumsfeld, are really the dead enders of America.

Indeed, a group that would demand 100% fealty to such a narcissist, as opposed to reality, facts, truth and America, truly is a cult.