Looking forward to reading this. 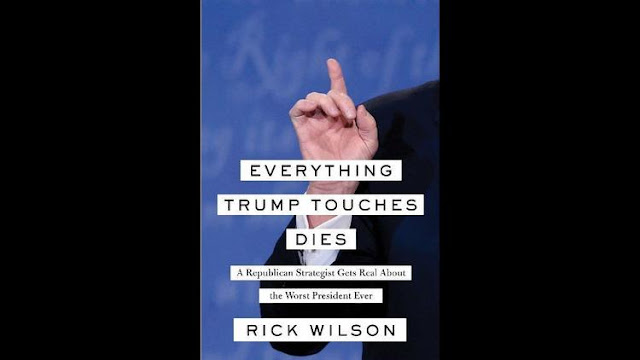 Rick writes: “Everything we Never Trump folks warned you of, including massive, decades-long downstream election losses, is coming. Alienating African Americans and Hispanics beyond redemption? Check. Raising a generation of young voters who are fleeing the GOP in droves? Check. Age-old beefs, juvenile complaints, and ego bruises taking center stage while the world burns? Check. Playing public footsie with white supremacists and neo-Nazis? Check. Blistering pig-ignorance about the economy and the world? Check. … Shredding the last iota of the GOP’s credibility as a party that cares about debt, deficits, and fiscal probity? Check.”

[Wildon] goes on to absolutely clobber the voters who make up Trump’s base and devour his conspiratorial ramblings: “Honestly, at this point, it’s almost a moral imperative to slap the stupid out of them.”


"We underestimated the deep human psychological need to be part of a movement based not on hope but on channeling the comments section of the nuttiest blogs. That’s what Trump gave them. He was an avatar for their anger, their impotence, and their blamestorming for everything wrong in their world.”
Posted by Shaw Kenawe at 10:16 AM

Wilson is always worth reading in the Daily Beast. Here's the most recent one on the Q idiocy.

He does have the kiss of death.

As much as they try to spin it, the Ohio special election was not a victory for the Repubs.

When a gerrymandered district that the incumbent took with 60% of the vote is within a hair of mandatory recount you're going to have to spin in pretty mysterious ways to make it a big win for tRump.

His man in Kansas, "Voter fraud" Kobach may have lost also. Too much of a trog even for Kansas repubs.
Not a good day for tRump.

I believe all thinking people should STOP referring to Dumb-Mock-Rats as "LIBERALS."

The term should be retired, because there ARE no true "LIBERALS" in positions of Power and Authority anymore.

Our FOUNDERS were true Liberals. Do you now anyone today who closely resembles THEM?

My favorite term for them would be SH-THEADS, but I know it would never fly in ths Nightmare PC-World.

The more criminal activity that is uncovered within the GOP -- and especially in those closest to the POTUS, the more the Goopers try to deflect by changing the subject, blaming other people, and using false equivalency.

You and your fellow cultists need to look hard and long at the miscreant you continue to worship.

A majority of Americans and the rest of the civilized world do not respect or support him.

Shaw... an FYI... Frank the Lobster is none other than Freethinke....

A somewhat careful reading of his rants at the usual hangouts will confirm it.

Regardless of who he is, he represents all that is wrong with Trump supporters who for years clamored for a certain morality in politicians, only to pretend it never mattered once Trump secured the GOP nomination.

That squarely puts him and others like him who claim Christ as their savior and support Trump, in the position of either abandoning their previously held principles, or pretending that Jesus never said stuff like "love your enemy and pray for those who persecute you."

On a daily basis, Franco will post how important Jesus is and then blast away at people who have another point of view that differs from his, calling them names, mocking them, etc, saying he doesn't care what ppl think of him, or how he expresses himself.

Dave, I thought Franco and Francoise were the same commenters pretending to be two different people. I wonder why F.A. chose "Frank Lobster" in Italian as his name. Anyway, you are so correct in describing the rank double standard the current Goopers are touting in order to continue to support one of the most morally corrupt men to ever sit in the Oval Office.

It's bad enough to have a president who is a congenital liar, but when his cultists have to lie to themselves to continue to support him, that's a tragedy. And their moral failing.