This is a very busy week with traveling starting on Tuesday and ending Sunday, to the coast of Maine and to Jamestown, R.I..

But there is always time to reinforce the fact that the GOP supports a suppurating open sore on America named Donald J. Trump who continues to embarrass himself and the U.S.A. with his petulance and childish Tweets that expose him as the sickening racist and imbecile that he is.

Lebron James was just interviewed by the dumbest man on television, Don Lemon. He made Lebron look smart, which isn’t easy to do. I like Mike!


Did I mention I love Bill Russell, one of the greatest basketball players to ever play the game? And a decent, honorable human being?

At this time & place for any African American, @KingJames @donlemon @RepMaxineWaters @repjohnlewis & #NFL plyrs to be criticised by @realdonaldtrump means you must be doing something right! As I have said before- Its the biggest compliment you can get. @TwitterSports @MSNBC @CNN


The Tweet below should be qualified. It should read "Only in Trumpista America.." 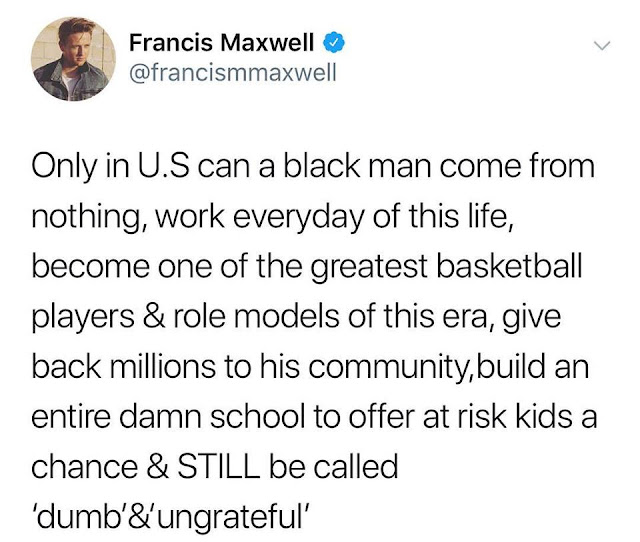 Just a friendly reminder: Donald J. Trump defrauded thousands of Americans with his fake "Trump University" and had to pay out $25 million to settle the law suit against him and his deplorable scam.

Here's some news that #45 will claim is "fake," and that his deplorable cultists will ignore, because it doesn't fit their delusional narrative of  Trump MAGA! The report below is another reason for President Spanky to delegitimize the media. He can call this report FAKE! and his brain-dead cultists will ignore it.

But facts are stubborn things:

More jobs are being created in Democratic counties than GOP strongholds that voted for President Trump in 2016, according to an Associated Press analysis, contradicting the president's assertions that jobs are "flooding back" into economically vulnerable areas that voted him into office.

The news service found that 58.5 percent of the significant job gains touted by Trump were concentrated in areas that backed Democratic presidential nominee Hillary Clinton in 2016. The AP also found that 35.4 percent of Trump counties have lost jobs in the past year, compared to 19.2 percent of Clinton counties.
Posted by Shaw Kenawe at 11:27 AM

Here's the GOP's POS president admitting his nothing more than a Mafia-type thug:

Trump: I ‘destroy' careers of Republicans who say bad things about me.

The thin skinned POS needs to destroy people? He's a cowardly weak POS probably pisses his pants everytime he thinks about Mueller, who served America gallantly while Trump cowered at home with Daddy and with his bone spurs. POS.

I do envy you your travel! One big advantage of not having any furry family to take care of 🐈


Over the last years, it was impossible to travel or take a vacation. My late husband and I both had serious illnesses. So to be able to travel again is a gift. As I stated earlier, I cannot have critters in my condo. Not allowed. Otherwise, I'd have a cat.