Trump's "I am not a crook" moment:

That's a DIFFERENT kind of "cover-up, is it?

Tell us, Donnie, why should anyone ever believe anything that comes out of that mouth of yours?

"The man who bought off Stormy Daniels so thoroughly that his bagman is in the federal sneezer said, "I don't do cover-ups," and, against all odds, his tongue did not burn with fire. The constitutional genius with the world's greatest brain made certain to remind Democrats that, as unlikely as this sounds, one day in the far distant future—of the year, say, 1998—a Republican Congress might bring "the I-word" against a Democratic president for frivolous reasons. I mean, good lord, the Clintons came to one of his weddings. Didn't they talk? The man has a brain of tapioca. " 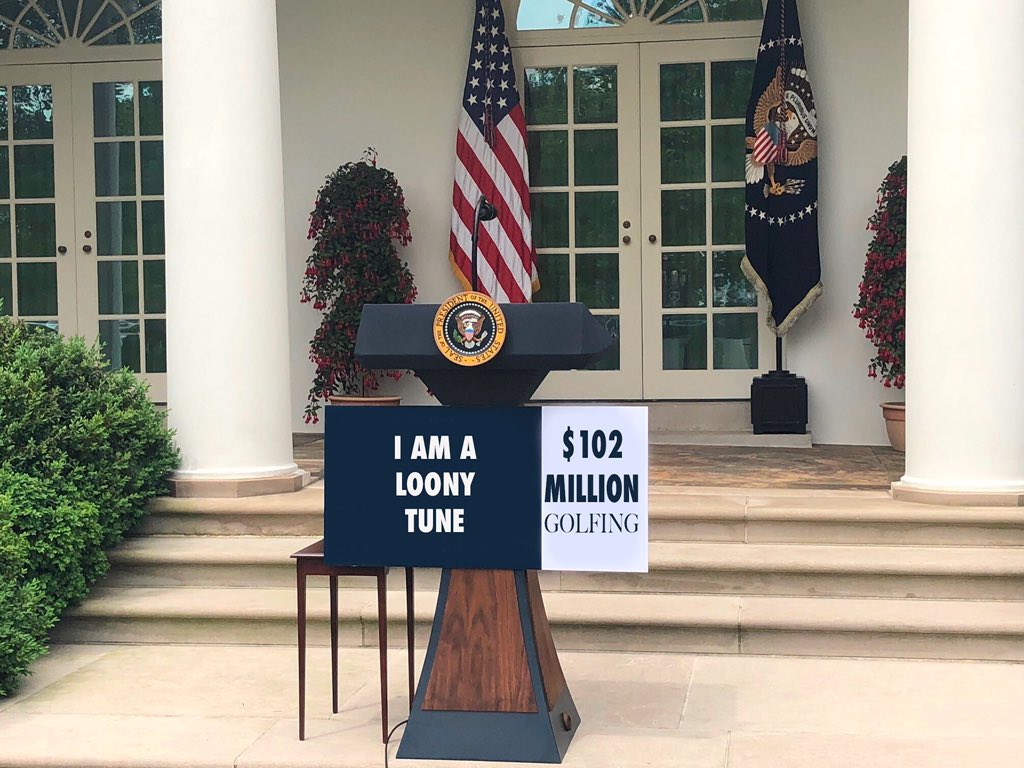 You can ‘smell Trump’s panicked flopsweat’ as House Dems close in on his taxes: Rick Wilson

Not My President said...

I miss having a real president that served all Americans, not just the extreme right! "The President, Vice President and all civil officers of the United States, shall be removed from office on impeachment for, and conviction of, treason, bribery, or other high crimes and misdemeanors. The charge of high crimes and misdemeanors covers allegations of misconduct by officials, such as perjury of oath, abuse of authority, bribery, intimidation, misuse of assets, failure to supervise, dereliction of duty, unbecoming conduct, refusal to obey a lawful order, chronic intoxication, and tax evasion." "unbecoming conduct" alone is enough to rid us of the Trump scourge


Is Trump okay in the head? How could a mentally sound mind say something as easily proved a lie as "I don't do cover ups?" The entire world knows DONALD TRUMP DOES COVER UPS!

How do his fans deal with this lunatic?

He said as he dismissed the IRS Commissioner who, in a draft letter, said the President could not refuse an order from Congress to produce his taxes. And then after he dismissed him, appointed a political supporter on record as saying Trump should not release his taxes. And then, he had that person's confirmation leapfrogged over others so he could be in place before the Dems took over Congress.

Nope... nothing to see here.


Dave, trump claimed today that he is THE MOST TRANPARENT PRESIDENT IN AMERICAN HISTORY!

When we Americans hear that from someone like Trump, it gives us pause. Do we laugh in his face or do we show compassion for someone who's clearly suffering from mental disorders.

When he claims something as patently fase as he did today, I do wonder if he's in the early stages of dementia. My husband and sister both died from a form of dementia. I know personally what its symptoms look like.

However, with Trump, he's lied all his life and since he started his campaign for the presidency, so it's difficult to determine if he's just being mendacious Trump or if he's suffering from mental decline. Maybe both?

When we Americans hear that from someone like Trump, it gives us pause. Do we laugh in his face or do we show compassion for someone who's clearly suffering from mental disorders.


Don't know whether we should laugh in his face, but, I sure as hell will never show compassion for Mr. Dotard.

The residents at Lisa's Latrine can't seem to quit you Shaw. You burn their asses on a daily basis. Good work.

Ray, if I burn the asses of any Trumpista, then I know I'm doing a good job. Thanks.

ok, so wait, he stormed out of meeting in the White House and just happened to storm into the Rose Garden? I guess that part is plausible, given his dementia-linked propensity to wander off. But then there just happened to be a podium complete with sound-checked mics standing in the Rose Garden and assembled press to boot? And that podium just happened to have been randomly hung with a sign detailing his reasons for storming out of said meeting that just ended early due to the aforementioned storming out? And atop the pre-positioned podium just happened to be some kind of pre-printed handbills also laying out said meeting related grievances? Hmmm, Wierdly that.

There's no doubt that trump has no moral compass, is ignorant of how government works, and is a serious mental wreck. His recent pity party in the Rose Garden is more of the same whining, bullshitting, lying, and childish behavior we've endured since this disaster was inaugurated.

We need to impeach -- he won't be convicted because of the GOP Senate, but there will be that black mark against him and his presidency. And he deserves to be shaamed and reviled for all history to see.

Shaw... I want to know what the deal is with the press. Why, when they get their 10 minutes with him, don't they parse these statements? Why not just decide to ask a question like... "Mr President, you said you don't do coverups. Were the payments to Stormy Daniels a coverup?"

And then just stand there. Repeat the question. Make him answer it, or ignore it. Ask him why he won't answer it.

The press seems impotent in front of him.

Dave, it's been 829 days since Trump's last presser. The press shouts questions to him as he walks back and forth to his helicopter, plane, or some area of the WH, and he decides whether or not he'll answer them.

Trump is not smart enough or informed enough to face the media and answer their questions, and I can't remember when his press secretary had the media ask her questions.

Trump has decided that the media are his enemies and enemies of the people. IOW, he is behaving like a tyrant.

As I said above to R.O.F., Americans and the entire world know for la fact that Trump definitely and without question DOES COVER-UPS.

He lied yesterday about that. As if that's a surprise?

Some folks are still willing to give Trump "the benefit of the doubt," but when someone in such a powerful position lies and dissembles the way Trump does, they don't deserve that consideration. I assume everything Trump says is either a lie or bullshitting.

Trump actually got one right:

I’m the most transparent president probably in the history of this country.”

He's absolutely correct; you can see right through him.