According to preeminent Hamilton biographer, Ron Chernow, Alexander Hamilton was trying to protect the country from someone with demagogic tendencies. "From the outset, Hamilton feared an unholy trinity of traits in a future president — ambition, avarice and vanity,"
Sound like anyone we know? It sounds like Hamilton was reaching into the future and describing the man who disgraced the Office of the Presidency -- the man who instigated a marauding mob with the Big Lie that the election was stolen and who incited that mob to breach the Capitol Building and commit mayhem and murder so that he would be kept in power: Donald J. Trump 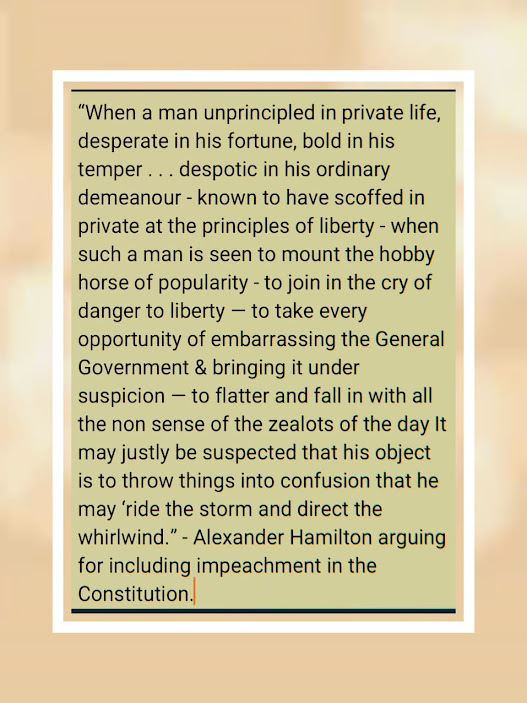 I'm with you Anonymous. But the party of cowards and sycophants will not do their duty to the Constitution and democracy and will stay loyal to a traitor to America.

NEVER call a Republican “conservative” again! If you hear someone refer to them as “conservative(s)” correct them! They are the “radical right” “the extremists” or “domestic terrorists.” They have lost the right to call themselves conservative. Nothing about them is conservative.

4518... remember that number every time a troll, extremist or current member of the GOP calls what happened on Jan 6 an incursion, a set up, a distraction or that only one window was broken. Remember that number when trolls claim this was a bunch of "Live action role players" acting. Remember 4518 every time trolls any type of justification or attempt to avert the eyes of Americans away from what happened in the US Capitol on January 6.

Because 4518 is the badge number of the US Capitol officer who was crying out in pain and for help as the mob of insurrectionists crushed him, ripped at his face, ripped at his mask and attacked him for following his oath to "protect the Capitol."

The GOP, extremist bloggers, trolls, liars, relativists, their supporters and yes, killers are a very vocal minority of people in America, intent on mob rule, and committed to insurrection to get their way.

Hamilton was brilliant. And today's Q-GOP share none of KHamilton's character traits. But that is just stating the obvious. Love the post.

Remember when Rep Adam Schiff said at the 1st trial that if he's not convicted then he would continue & only get worse?

The seditious GOP won't step up

Hamilton has been spinning in his grave for the last four years. We could have tapped his rotational energy to power a city.

When Trump was first elected, many of us saw what really motivated his voters. We saw the viciousness of his supporters at his rallies. We saw the symbols of hate - the Confederate and Nazi flags waved proudly - and many of us tried to warn others of what was happening to this country.

Early on Trump's term, we were told that we were simply being "hysterical". That things wouldn't get "that bad". Well, here we are.

It turns out that this was all Trump voters ever wanted. To be told that they are only real Americans and the rest of us should be content with the scraps of second-class citizenship. As an American citizen of Middle Eastern ancestry, I heard more slurs like "go home" and "you don't belong here" more in the past four years than I heard in my first sixty.