Let's hope the staggering amount of evidence against this corrupt ex-president brings justice to those who were killed during his incitement to insurrection for the overthrow of the United States government, and that he pays a price for his treachery.
Trump lied to his gullible cultists about his election loss, telling them that the election was stolen. None of it was true, and Trump needs to be held accountable for what happened as a result of his Big Lie.
Let's hope the coming impeachment trial does that.
Meanwhile...
Breaking With G.O.P., Top Conservative Lawyer Says Trump Can Stand Trial
Charles J. Cooper, a stalwart of the conservative legal establishment, said that Republicans were wrong to assert that it is unconstitutional for a former president to be tried for impeachable offenses.
In an opinion piece posted on The Wall Street Journal’s website, the lawyer, Charles J. Cooper, who is closely allied with top Republicans in Congress, dismissed as illogical the claim that it is unconstitutional to hold an impeachment trial for a former president. The piece came two days before the Senate was set to start the proceeding, in which Mr. Trump is charged with “incitement of insurrection” in connection with the deadly assault on the Capitol by his supporters on Jan. 6.
******************************
And here's Trump at his best, urging his insurrectionist mobs to keep his Big Lie alive and disparage his own vice president for not breaking Constitutional law in his favor so he can hold onto power. 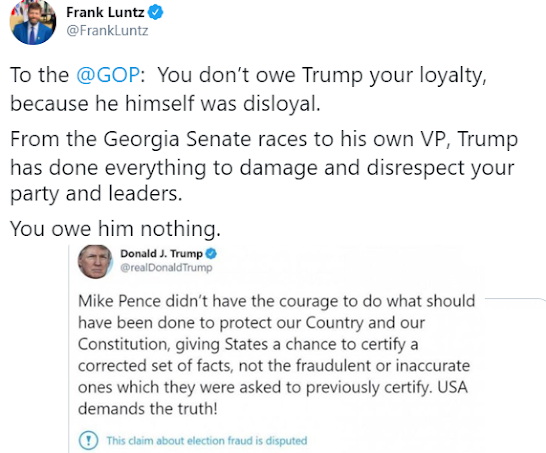 DJT should not show up. It’d be a perjury trap in the least. The truth hasn’t mattered to Trump for years.

Let's remember to add this to Mr Cooper's opinion.

In 1876 the Secretary of the Army was impeached by the House, tried by the US Senate, wait for it trolls... after he left office.

His plan was to avoid impeachment by resigning and claiming that since he was no longer in office, the Senate could not try him. In essence he was making the same claim Trump's apologists in the Senate, House and the US have been making. That a trial of a man not in office is unconstitutional.

Except the Senate then, as they did last week, dispensed with that argument, had a weeks long trial and a majority of Senators found him guilty. They did not however, have enough votes to convict which is likely in Trump's impeachment too.

But... and this is huge. The Senate set a precedent.

Let's have the trial so many Republicans seem to want to avoid. And after seeing the evidence, ppl can make up their minds. Just like we did years ago with Belknap.

You and I know that had this happened when Obama was president -- had Obama lost the 2012 election and then claimed it was stolen and then encouraged a mob of POC to storm the Capitol building to interfere in the certification of the electoral college votes -- we can be sure that the GOP would be SCREAMING for Obama's impeachment, and worse.

What we have is an outlaw wing of the GOP wanting to pretend that their president did not incite the mobs to violence in order to disrupt the certification that resulted in Trump's insurrectionists killing a Capitol policeman as well as maiming for life others and, in addition, his mobs SCREAMING "Hang Mike Pence," and looking for the Speaker of the House to assassinate her as well.

Those are facts, and now we have so-called Republicans wanting us to ignore those facts and "move on" as though this never happened. Well it did happen.

Trump, in fact, did incite mobs to overturn a free and fair election so that he could retain power. This is how it's done in totalitarian countries -- see Russia and Myanmar for example. And that s.o.b., Trump, tried it here in America.

Trump needs to be held accountable for his incitement and the ensuing deaths as a result of his putsch to hold on to power.

We need to see the evidence that's been gathered to make the case for his justified punishment and banishment forever from American politics.

Anonymous, Trump won't testify because of his mendacious nature.

Liz Cheney: "There Will Be 'Many, Many Criminal Investigations' Of Trump's 'Assault' On The Capitol."

Good. Bring it on!

Breaking: Chiefs really won the game. Sidney Powell is on the case!

Hey Trump tried it, why can't us KC Chiefs fans do it too?

Shaw... first, you should know better than to offer up a word like mendacious without providing a link for the trolls.

You mentioned "an outlaw wing of the GOP".

That's an apt description except for this... ask a current day GOP supporter to define extremism on their side of the political ledger and all you're gonna get is crickets. Many progressives will readily identify the characteristics of leftist extremism, but the conservatives seem incapable of that level of self reflection.

I believe the reason is because 5 years ago they would would have described their present day "patriots" as extremists, but times have changed and they are loath to define themselves as the fringe.

tRUMP is just the biggest POS to ever come along, let alone become president. He really brought out the worst in republicans.

Just so we don't forget: Brian Sicknick was the Officer who was killed during The Insurrection on 1/6/2021 by Trump supporters. He was beaten to death. Officer Sicknick voted for Trump. Donald Trump did NOT attend his funeral. Joe Biden did.

We already know the outcome. Acquitted.