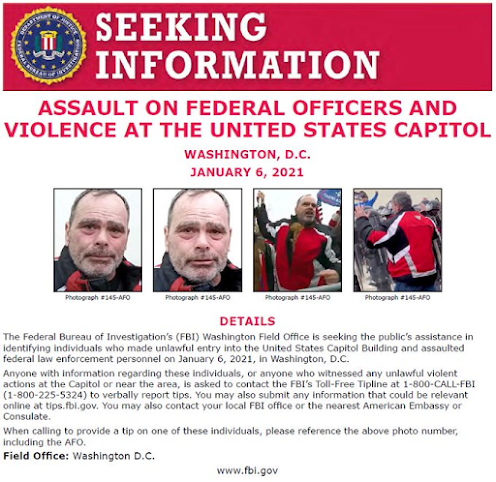 A retired NYPD cop turned on his brothers in blue at the U.S. Capitol riot, assaulting an officer who he called “a commie motherf----r,” prosecutors charged Tuesday.
Thomas Webster, who also served in the Marines, exploded in rage on Jan. 6, attacking the Metropolitan Police officer, Assistant U.S. Attorney Ben Gianforti said during a hearing in White Plains Federal Court.
“This is a man who was going to unleash some kind of violence ... He goes after that cop like a junkyard dog. Like I said, fists bared, teeth clenched,” Gianforti said, describing Webster as one of the most serious cases involving the riot that passed through the Westchester courthouse.
Webster, 54, was labeled by social media sleuths as the eye gouger due to photos showing him appear to poke his thumb into the eyeball of the uniformed cop. He’s accused of attacking the officer with an aluminum pole that held a Marine Corp flag. Video captured Webster tackling the cop once a protective barrier had been removed during the mayhem. They wrestled and he ripped off the cop’s protective gas mask and helmet, briefly choking him in the process, authorities said. “F--king piece of s--t, commie motherf----r!”  Webster said to the cop in comments caught on video, according to prosecutors.
“This is a cop calling another cop that,” Gianforti said, adding that Webster also betrayed his oath as a Marine. A police source said Webster joined the NYPD in 1991 and retired in 2011 after working the security detail at City Hall and the mayor’s residence at Gracie Mansion.
The married father of three from Florida, N.Y., in Orange County now runs Semper Fi Landscaping. He faces as much as nine years if he chooses to go to trial — a minimum of roughly five years if he pleads guilty. His attorney, James Monroe, said Webster deserved bail, portraying him as a law abiding citizen — except for on Jan. 6.
“He went there to protest an event that was urged on by our former president,” Monroe said, alluding to President Donald Trump’s lies that the election was stolen for President Biden.
Posted by Shaw Kenawe at 7:12 AM

Guarding the capitol makes one a communist? republicans work there too. I guess if they weren't communists they would have stood aside and allowed the mob to stop the counting of the EC votes. What an idiot.

And the people of NY believed andy and a few thousand died. Now we have predator andy who is getting little press and declaring he supports the me too movement.
Let's pass the new pork bill so we can kill more pigs and further punish the poor with the raise in gas prices and the elimination of unskilled jobs and the dumb down of public schools so we can appease the NEA. Our political corrupt are having a field day while saying they are all for the average American.

Derv The Trump cultists who attacked the Capitol building and wanted to kill Vice President Pence and Speaker Pelosi are delusional half-wits who believed the lies Trump told them. Trump's in Mar-a-Lago and his faithful cultists are going to jail for failing to overthrow the United States government.

But just to humor you, I'll say this: I was never an uncritical fan of Andrew Cuomo. If you search my blog, you'll see I never posted anything about him during the first wave of COVID, even though he's the governor of the state where my son and his family lives.

I don't know all of the facts about what happened vis-a-vis nursing homes and COVID deaths, but I DO know the facts of the attack on the Capitol by Trump's insurrectionists. I watched it with my own eyes, and yet I've yet to read anything from you about it as critical as what you write about pols like Cuomo.

73% is a HUGE majority, and the Trumpublicans in Congress will not support it. The question is: Who the hell do those Trumpublicans represent? Certainly NOT the American people. Maybe they support the thugs who tried to overthrow our government? Seems like they do.

Yet you come here and bitch about Cuomo? Puleeeeeeze!

To your statement, andy lied about the nursing home deaths and directed the sick be sent there. He is also accused by a staffer of sexual harassment and like kavanaugh he is guilty until proven innocent. Trump did not say follow me to destroy the capital but in your defense he didn't say don't riot so part of the blame is on him and the rest are on the wacko right.

We need a stimulus bill but not a 2 trillion dollar pork infested spend. Increase unemployment benefits, aid small businesses and spend the money already allocated.
Joey is in his honeymoon first 100 days and after trump he is a calming force. He has avoided Q&A press conferences and his only actions are roll back what trump did. I have zero expectations he will only do what he is told by his handlers and of course his mentor. He lies but is not corrected by the press because he is their selection.

Nine weeks ago zero percent of Americans had received the vaccine. Joey stepped into a situation where two vaccines and now three have been developed and approved. For him to say he had nothing when he took over is a simple lie because both he and cruella received the vaccine prior to inauguration. Seems like the press didn't notice that.

Maybe this will wake up the good cops into not protecting the bad cops just because they are cops. ... Naaa.


I will have to circle back to you on that!