FAUX NOOZ hosts have pinned the blame from the power outages in Texas solely or mostly on the frozen wind turbines.
They have told viewers that Texans are feeling the sting of green energy policies in a state run for decades by Republicans. Some of the most widespread and erroneous claims came from FAUX NOOZ host Tucker Carlson.
"Unbeknownst to most people, the Green New Deal came to Texas, the power grid in the state became totally reliant on windmills," Carlson said Feb. 16. "Then it got cold, and the windmills broke, because that’s what happens in the Green New Deal."  Carlson lied about solar panels as well, because he's a hate monger and spreader of false information to his gullible listeners. 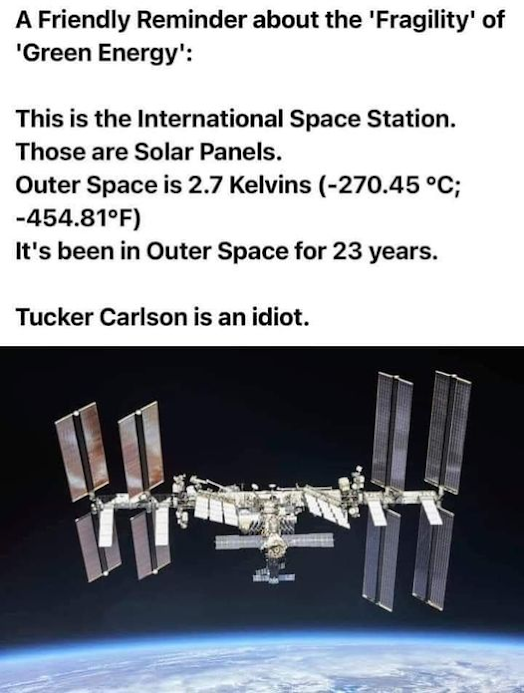 The two parties are not the same.

Naturally, the rabid far righties, being the cynical losers that they are, attribute AOC and O'Rourke's humanity to "knowing how to play the game." Those folks have gone beyond being spittle-flecking enraged hyenas over Trump's major defeat in the last election and have now gone full-on banshee wailing and gnashers of teeth because they're beginning to understand what kind of crappy, self-serving, Trumpian bigots populate what was the former GOP.

The Boeberts, Greenes, Gohmerts, Hawleys, and (Gawd help them!) Lindsey Grahams are the face of the current Trumpublican Party!

It is no wonder they're all so angry all of the time! LOL!

Meanwhile, President Biden has a 60+ percent approval rating with the American people, and Donald Trump is in Mar-a-Largo!

Yes, Tucker Carlson is an idiot.

I also read that (somewhere) in the US a power company is trying to get permission to charge people with solar cells a higher 'basic fee' (the fee you get charged just for having a connection to the grid) because they don't make as much money from those people. The fee would make the solar power unaffordable.

There is a point to be made how any energy system will stand up to worsening weather conditions. We should probably not rely on one energy source. To bad we have wasted so much time not perfecting other energy systems.

Oh, it is quite possible for businesses and politicians interested in short-term profit ahead of everything else to screw up even the most reliable tools they have. As well as everything else.